Blessed Virgin Mary of the Rosary

The Rosary experienced an extraordinary surge in the 13th century thanks to the Dominicans. The Fatima apparitions then raised awareness of the importance of the Rosary in God's saving plan as a weapon against Satan 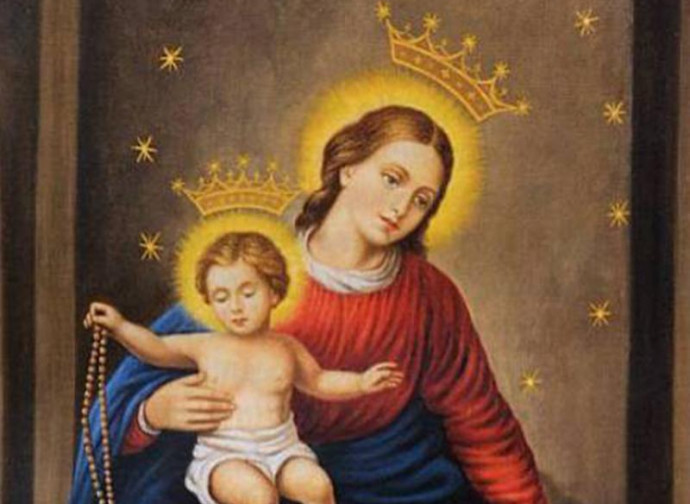 On 7 October 1571, in the Greek waters of Lepanto, the Muslim fleet of the Ottoman Empire clashed with the Christian fleet of the Holy League, which brought together the republics of Venice and Genoa, the Papal State, the Spanish Empire, the major Italian duchies and the Knights of Malta. The banner of the Holy League, blessed before the departure by Saint Pius V, depicted the Crucifix between the apostles Peter and Paul, surmounted by the motto In hoc signo vinces. It was the only banner fluttering in the Christian line-up, together with an image of Our Lady with the inscription Sancta Maria succurre miseris. The Turkish fleet had the 'Banner of the Caliphs', with the name of Allah emblazoned on it thousands of times. Before the battle, the Christians prayed the Rosary and asked for Mary's intercession.

That October 7th marked the first great victory of a Christian fleet in Europe - then aware of its roots and the need to defend them - against the Ottoman Empire and its expansionism, which had already Islamized many territories. It was only 23 days later that messengers informed Rome of the Christian victory, but on the same day of the battle St Pius V had had a vision and ordered: “It is 12 o'clock, ring the bells, we have won at Lepanto through the intercession of the Blessed Virgin”. This is how the feast of Our Lady of Victory, later renamed Our Lady of the Rosary, was born. Its present name was decided in the 1969 calendar reform. In 1883, meanwhile, Leo XIII had “consecrated and dedicated to the heavenly Virgin of the Rosary” the month of October, encouraging the daily recitation of the prayer for the whole month.

The Rosary had already experienced an extraordinary surge in the 13th century thanks to the Dominicans (Saint Dominic, who had prayed to understand how to defeat the Cathar heresy, saw the Virgin handing him the chaplet) and the various confraternities born with the aim of spreading this prayer, which had been increasing in popularity even in earlier centuries. The Fatima apparitions then raised awareness of the importance of the Rosary in God's saving plan as a weapon against Satan. Our Lady recommended the daily recitation of the Rosary to the little shepherds already in the first apparition of 13 May 1917, “to obtain peace in the world and an end to war”.

Sister Lucia further explained its power in an interview with Father Fuentes: “The Most Blessed Virgin wanted to give, in these last times in which we live, a new effectiveness to the recitation of the Holy Rosary. She has strengthened its effectiveness so much that there is no problem, however difficult, of a material or especially spiritual nature, in the private life of each one of us or in that of our families, families throughout the world, religious communities or even in the lives of peoples and nations, that cannot be solved by praying the Holy Rosary. There is no problem, I tell you, however difficult, that cannot be solved by the recitation of the Holy Rosary. With the Holy Rosary we will save ourselves, sanctify ourselves, console Our Lord and obtain the salvation of many souls”.