Our Lady of Fatima

On May 13, 1917, while they were grazing their flock at the Cova d'Iria in the Fatima area, 10 year old Lucia dos Santos, 9 year old Francisco and 7 year old Jacinta Marto saw a Lady dressed in white appear. 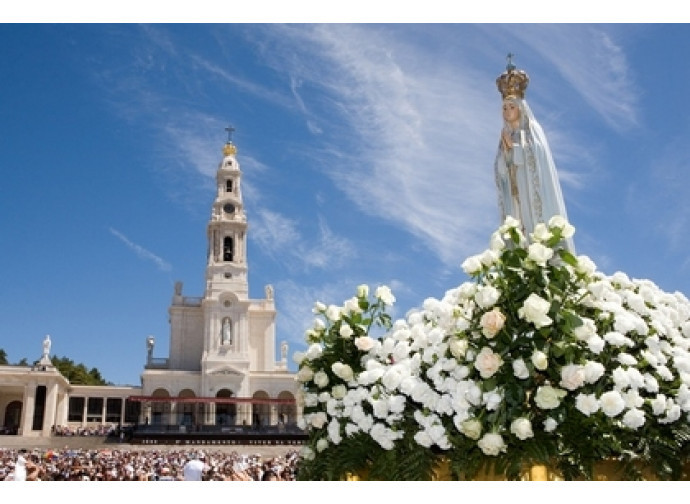 On May 13, 1917, while they were grazing their flock at the Cova d'Iria in the Fatima area, 10 year old Lucia dos Santos, 9 year old Francisco and 7 year old Jacinta Marto saw a Lady dressed in white appear. “Don't be afraid, I won't hurt you”, said the Lady. Then she replied to the question put to her by Lucia, the 'spokesperson' of the three, who asked her where she came from: “I come from Heaven”. She then asked the little shepherds to “come here for six consecutive months, on the 13th at this very hour. I will tell you who I am and what I want. Then, I will come back here a seventh time.”

At the close of that first meeting, after having predicted to them that they would go to Heaven, the beautiful Lady asked this question: “Do you want to offer yourselves to God to bear all the sufferings that He will send you, in an act of reparation for the sins by which He is offended, and of supplication for the conversion of sinners?”. “Yes, we do.” Our Lady then said that God's grace would sustain them in their sufferings and she opened her hands, “communicating to us such an intense light, a kind of reflection that came out of them and penetrated our chests and the innermost part of our soul, making us see ourselves in God, who was that light, more clearly than we see ourselves in the best of mirrors”. Before ascending to Heaven, Our Lady asked the little ones to pray the Rosary every day “to obtain peace in the world and an end to the war”.

Thus began the most famous Marian manifestation of the 20th century, for which the three little shepherds had in fact been prepared by the three apparitions in 1916 of the Guardian Angel of Portugal. In the third, in particular, the Angel taught them this prayer: “Most Holy Trinity, Father, Son, Holy Spirit, I offer you the Most Precious Body, Blood, Soul and Divinity of Jesus Christ, present in all the tabernacles of the earth, in reparation for the outrages, sacrileges and indifference with which He Himself is offended. And, by the infinite merits of His Most Sacred Heart and the Immaculate Heart of Mary, I ask you for the conversion of poor sinners”. Then, with the three of them on their knees, he gave them Communion: to Lucia he gave the Host; to Francisco and Jacinta he offered the chalice, into which some drops of the Blood of Jesus had fallen - from the Host itself.

There was already here a foreshadowing of what Our Lady would communicate to the little shepherds on June 13, 1917, when she announced that the two young Marto siblings would soon ascend to Heaven, while to Lucia she said: “... you will remain here for some time longer. Jesus wants to use you to make me known and loved. He wants to establish in the world devotion to my Immaculate Heart. To those who will practise it I promise salvation. These souls will be loved by God, and like flowers will be placed by Me before His throne”. Years later, in 1925, the Virgin appeared to Lucia with the Child Jesus and a heart crowned with thorns, explaining to her to spread the practice of the reparatory Communion on the first Saturday of the month, to be done for five consecutive months, to make reparation for the offenses to Her Immaculate Heart.

THE VISION OF HELL

On July 13th the shepherds received the revelation of the “Three Secrets of Fatima”. It was in fact a single revelation divided into three parts, as Lucia reported years later - as a nun - in her Memoirs, written out of obedience. In the first, the children had a vision of Hell, to which those who refuse God's Mercy to the last are condemned. They saw “a great sea of fire, which seemed to be below ground. Immersed in that fire, demons and souls [...]”. This vision, which lasted a moment, was interrupted by the words of Our Lady who, in a kind, sad voice, explained to them: “You have seen Hell, where the souls of poor sinners fall. To save them, God wants to establish devotion to My Immaculate Heart in the world. If they do what I tell you, many souls will be saved and have peace”.

RUSSIA AND THE IMMACULATE HEART OF MARY

The Blessed Virgin, in the second part of the secret, predicted the imminent end of the war, but warned that another greater war would break out “if they do not stop offending God. To prevent the new conflict she said that she would return to ask for the consecration of Russia - which in 1917 suffered the Marxist revolution - to her Immaculate Heart and that reparatory Communion of the first Saturdays. “If they accept My requests, Russia will convert and have peace; if not, it will spread its errors throughout the world, promoting wars and persecutions against the Church. [...] Finally My Immaculate Heart will triumph. The Holy Father will consecrate Russia to me. It will convert, and some time of peace will be granted to the world”.

The third part of the secret concerns the vision in which the Angel cries out three times, pointing to the earth with his right hand: “Penance, Penance, Penance!” It is the same vision that dwells on the persecutions of the Church and on the famous figure of the “bishop dressed in white” who climbs a steep mountain and suffers martyrdom, at the foot of a great Cross, “together with bishops, priests, male and female religious and various secular persons, men and women of various classes and positions”. In the vision there were also two Angels who collected the blood of the martyrs and “sprinkled it over the souls that were approaching God”.

FROM THE EVENTS OF AUGUST TO THE MIRACLE OF THE SUN

The fourth apparition took place on August 19th instead of on the 13th because that day the anti-clerical mayor Artur de Oliveira prevented the shepherd children from going to the Cova d'Iria; he questioned them and tried to force them to reveal the secret. Since the three children did not give in, the mayor sent them first to the parish priest and then had them imprisoned, releasing them only two days later. On September 13th Our Lady renewed to the little visionaries the promise that at the next apparition an obvious miracle would take place.

On October 13th, at the Cova d'Iria, there was a crowd of about 70,000 people: ordinary people, nobles and authorities, sceptics and humble of heart, sick people, journalists and photographers. The rain fell abundantly and, as the prodigious sign was late in coming, many mocked the young shepherds. Meanwhile, Mary Most Holy appeared to the three, revealing herself as “Our Lady of the Rosary”. The Virgin then ascended to Heaven, which opened as she passed, and it was then that the miracle of the sun took place, reported in detail, among many, by Avelino de Almeida, director of a progressive and anti-Catholic newspaper, O Seculo, who had admired - astounded - the heavenly spectacle. “It looked like a silver disk, and it was possible to look at it without problems. It didn't burn the eyes, it didn't blind them. [...] the sun trembled, made strange and abrupt movements, outside of any scientific logic, - the sun “danced” - according to the typical expression of the peasants”.

The wet clothes of those present dried completely. Francisco, Jacinta and Lucia saw, high in the firmament, Mary beside the Child Jesus and Saint Joseph blessing the world. Mary appeared to them again as Our Lady of Sorrows, with Jesus beside her, and finally Mary appeared on her own in the garb of Our Lady of Mount Carmel, holding the Scapular in her hand, another a sign of a devotion that brings salvation.

Whoever hates his life in this world will keep it for eternal life (John 12: 25)