Saint Dominic of Guzmán (1170-1221) - founder of the Order of Friars Preachers, commonly known as Dominicans - was born into a wealthy family in a small village in Old Castile. St. Dominic taught his friars that “our study must primarily, with ardour, with every energy, aim to make us useful to our brothers”, with the aim of saving souls 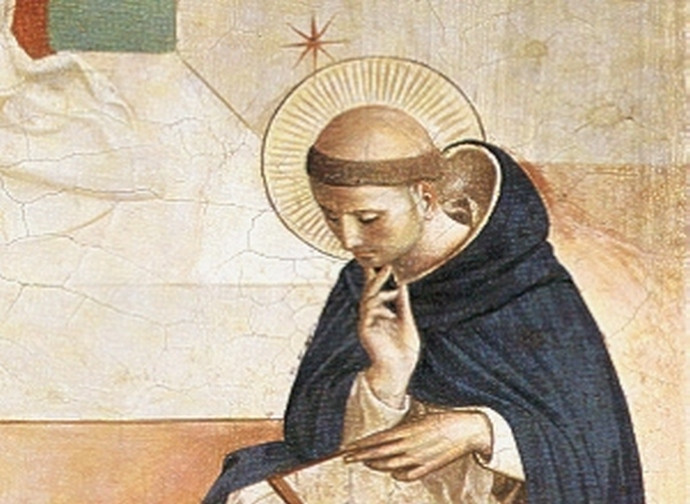 Saint Dominic of Guzmán (1170-1221) - founder of the Order of Friars Preachers, commonly known as Dominicans - was born into a wealthy family in a small village in Old Castile. His mother was Blessed Joan of Aza, who had chosen the name of her son in thanksgiving to St. Dominic of Silos (†1073), after going on pilgrimage to pray at his grave to understand a dream she had during her pregnancy. She had dreamt of a dog coming out of her womb with a burning torch and, thanks to the intercession of the saint, she understood that her son would set the world on fire with the fire of Jesus through preaching. As a teenager Dominic went to Palencia to study liberal arts and theology, already revealing an incredible talent. Distressed by the suffering caused by famine, he did not hesitate to sell his precious scrolls in favour of the poor: “How can I study dead skins while so many of my brothers are starving?” he said to those who did not understand that choice. Even then, he was burning with love for Jesus and Mary.

He was ordained a priest at the age of 24. In the early days of his ministry he continued to deepen his knowledge of the Bible and the writings of the Fathers, alternating study and meditation with God. It was as if he walked unnoticed on the paths of Providence, waiting for the fruits. Dominic was already 33 years old when, in 1203, he accompanied his bishop on a diplomatic trip to Denmark: passing through southern France he saw the spread of Cathar heresy and was then fascinated by the enthusiasm of northern European Christians, eager to go eastwards to proclaim the Gospel. Three years later, on his return from a second trip to Denmark, he visited Innocent III. The Pope directed Dominic's missionary zeal towards the French Languedoc, the greatest domain of the Cathars or Albigenses. These, among many dangerous errors, used poverty as a lever of rebellion against the Church and rejected the Incarnation, denying the sufferings of Jesus in his sacred humanity.

The saint, authentically humble, devoted himself to countless public disputes and personal conversations to convert those who had fallen into heresy. Many returned to the Church convinced by the charity and wisdom of Dominic, who with his example of a poor and simple life (embodied by another column of those years, St. Francis of Assisi) dismantled the main weapon of the Cathars. According to what Blessed Alain de la Roche would tell us, Dominic was facilitated by the diffusion of the Rosary, “the weapon” that Our Lady had given him in 1212 after he had begged her to give him a means to overcome the Albigenses without violence.

Since in the meantime other men of the Church had gathered around him, he had the idea of founding a new religious institute: thus was born the Order of Friars Preachers, which was first approved orally by Innocent III and then, on 22 December 1216, by his successor Honorius III. The Dominicans adopted the Rule of St. Augustine by merging it with their own Constitutions, based on mendicant poverty and the study of preaching.

St. Dominic taught his friars that “our study must primarily, with ardour, with every energy, aim to make us useful to our brothers”, with the aim of saving souls. An indispensable premise is the time dedicated to God, because “what the preaching friar draws from contemplation is what he then dispenses in preaching”, according to the teaching that an illustrious Dominican, St. Thomas Aquinas, enclosed in the maxim Contemplari et contemplata aliis tradere (“Contemplate and transmit to others the things contemplated”). Sent by their founder, the Dominicans began to spread throughout Europe, especially in the major university centres of the time, such as Paris and Bologna. It was precisely in Bologna that Dominic, dressed in an old habit covered in patches and now exhausted by apostolic labours, gave his soul to the heavenly Father at the age of 51. It was 6 August 1221. Next to him were his confreres, who saw his face shine.