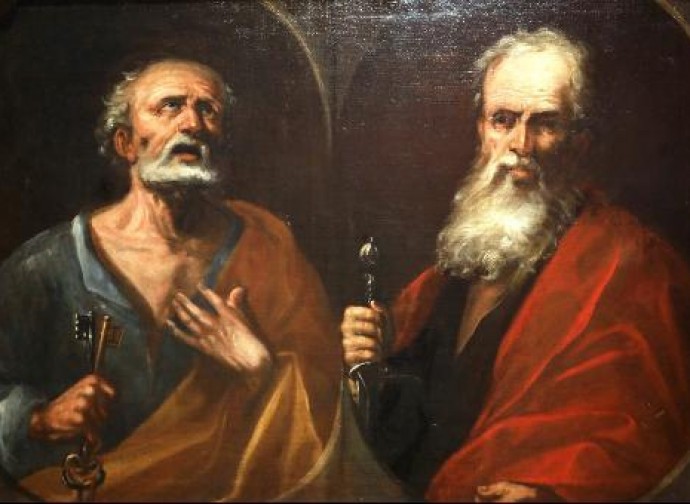 Their common feast, which has the liturgical degree of solemnity, has very ancient origins. The celebration on 29 June has been attested since the first half of the fourth century, when three Masses were celebrated in honour of the two saints: one at St. Peter’s Basilica in the Vatican, place of the martyrdom of the Prince of the Apostles, crucified upside down; the second at St. Paul Outside the Walls, along the Via Ostiense, where the Apostle of the Gentiles was buried after his beheading; the third at the catacombs of St. Sebastian, where the bodies of Peter and Paul were provisionally transferred on June 29, 258 (the date is taken from the Depositio Martyrum) to protect them from the persecutions of Valerian, who had issued his second edict against the Christians in that year. It was only during the pontificate of St. Sylvester (314-335), during the pax Constantiniana, that the relics of Peter and Paul were returned to their original sepulchres, on which the two famous basilicas named after them were built.

Their evangelizing mission and the blood shed for the faith in Rome, caput mundi, testify that Providence wanted to establish the primacy of the Roman Church, to safeguard the unity in the faith of all the Churches scattered throughout the world. The year of the martyrdom of Peter and Paul was 67, according to a consolidated tradition that is based above all on the testimony of St. Clement in his Letter to the Corinthians (about 95), where he wrote that the martyrdom of Paul took place “under the prefects”: in 67 Nero, leaving for Greece, had entrusted the government of Rome to the two prefects of the praetorium, Tigellinus and Sabinus. 67 is the year that also emerges from the De viris illustribus (393) of St. Jerome, which was based on ancient sources: in several passages, the saint reported that the martyrdom of Peter and Paul had taken place “on the same day”, “in the fourteenth year of Nero” and two years after the death of Seneca (†65).

Also testifying to the martyrdom on the same day are Dionysius of Corinth (2nd century), the Roman Martyrology, the Eastern Synaxaria, and the Decretum Gelasianum (end of the 5th century), which states: “Not on a different day, as heretics prattle, but at the same time and on the same day Paul was with Peter crowned with glorious death in the city of Rome under Nero”.

SAINT PETER. The humble fisherman of Bethsaida, who had become the Vicar of Christ on earth and the repository of the keys to the Kingdom of Heaven, had received his new name at the first unforgettable encounter with Jesus, who, gazing at him, said: “You are Simon, the son of John; you will be called Cephas” (which means Peter, i.e. rock, in Aramaic). He did not yet know that this name symbolized his mission. Simon Peter became the first to confess that Jesus is the Christ, the Son of the living God. And by Christ he was placed at the foundation of the Church as its visible head, invested with the authority to bind and dissolve (Mt 16:17-19), transmitted by divine will to his successors, all called – like Peter – to strengthen their brothers in the faith (Lk 22:32). In establishing Peter’s primacy over the Twelve, Jesus also made him a perennial promise about the Church: “The gates of hell will not prevail against it”. There is implied the eschatological battle between God and Satan which takes place first of all in the heart of each person, to whom the Church has been gifted as a means of saying “yes” to Christ, awaiting His glorious return.

Elected to be the first of the “fishermen of men”, Peter, with all his human frailties but also with his extraordinary outbursts of love for Jesus, matured his total renewal in Christ in parallel with the unravelling of the heavenly mysteries. He thus went from thinking according to men (as when he protested at Jesus’ announcement of his imminent Passion, receiving the reply vade retro Satana) to thinking according to God. If before the Crucifixion on Calvary, the Apostle out of fear denied his beloved Master three times, after the Resurrection he atoned with a triple offer of love in reply to Jesus’ questions, who solemnly entrusted His mission to him: “Feed my lambs” (John 21:15-19); and after Pentecost, having received the Holy Spirit, he was now ready to offer all of himself to the proclamation of the Gospel, enduring persecution. As would be noted, first of all, by the members of the council who arrested Him and told him not to speak of Christ anymore, to whom he replied: “We ought to obey God rather than men” (Acts 5:29).

SAINT PAUL. The Pharisee originally from Tarsus, in Asia Minor, belonged to the tribe of Benjamin and was trained in Jerusalem at the school of Gamaliel. The latter was the doctor of the law who, at the beginning of the Jewish persecutions against the early Church, made a wise intervention in the council, which proved to be prophetic and handed down through the centuries thanks to the account of St. Luke (Acts 5:34-42).

The conversion of St. Paul is such a great event in the history of the Church that it is celebrated with a specific feast on January 25. It was thanks to Saint Barnabas that the former persecutor, after having announced the risen Jesus in Damascus, was presented to the Twelve. By them, and especially by Peter (who then had the humility to accept Paul’s correction at Antioch), he was confirmed in the Gospel preached by him, of which he said: “for I neither received it from man, neither was I taught it, but by the revelation of Jesus Christ” (Gal 1:12). His acceptance of God’s grace transformed him into the greatest missionary of all time, capable of proclaiming and converting to Christ vast numbers of people. He did this by travelling from one city to another of the Roman Empire, amidst a thousand dangers and sufferings, imprisonments, beatings, shipwrecks, frequent vigils and fasting. He was happy to do so because, as he wrote to the Galatians, “I am crucified with Christ, nevertheless I live; yet not I, but Christ liveth in me…”  (Gal 2, 20).