On 1 December he was led to Tyburn gallows, near present-day Marble Arch, where he was hanged, drawn and quartered. Fr Alexander Briant and Fr Rudolph Sherwin suffered martyrdom with Campion 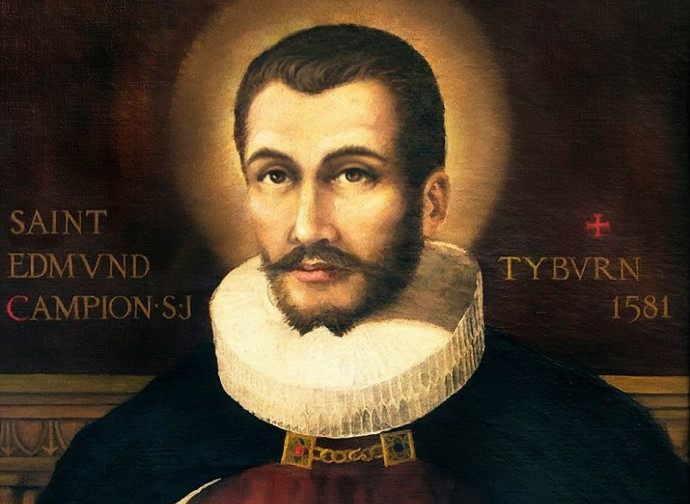 Saint Edmund Campion (1540-1581), known as the Pope’s Champion, was born in London during the vicious years of the Anglican Schism. He lived most of his adolescence during the reign of Mary I Tudor (1553-1558), who tried to restore Catholicism in England. On the death of the Queen, daughter of Henry VIII, who had caused the schism, her half-sister Elizabeth I, who re-established the anti-Catholic Oath of Supremacy, took the throne. Every person taking public or religious office was obliged to swear absolute fidelity to the sovereign in power and, in particular, to recognise them as head of the Church of England.

Even Campion, perhaps on the occasion of his baccalaureate, had taken the oath. A great orator, he was chosen to conduct a public debate before Elizabeth, earning her high regard. Persuaded by a schismatic bishop, he became an Anglican deacon. But in the meantime, he had begun to harbour strong doubts about the faith. Thanks above all to his study of the Fathers of the Church, he discovered the reasons for Catholicism and therefore the distortions of Anglicanism. When the rumours of his shift to Catholicism spread, he moved to Ireland for a couple of years, from where he escaped in secret (he had been hunted for months by the Protestants) in 1571. His new destination was France. Here he reconciled with the Catholic Church and received the Eucharist after a 12 year lapse.

Some time later he walked barefoot on pilgrimage to Rome, where he joined the Jesuit order. He experienced a vision of the Blessed Virgin who foretold his martyrdom. At the age of 38 he was ordained a priest by the Archbishop of Prague, where he taught philosophy and rhetoric. In 1580 the time came for his Jesuit mission in his homeland, England. Campion was sent there together with Father Robert Persons. But the two priests, who had left together, landed there at different times because during the journey they were informed that the English authorities had become aware of their arrival. The saint entered the country in the guise of a jewellery merchant.

Despite the dangers, Campion immediately devoted himself to preaching. He went from house to house to administer the Sacraments and urge Catholics to keep the faith. It was during this period that he wrote a famous booklet, Decem rationes (“Ten reasons”), in which he presented the errors of the Anglicans. Four hundred copies of the pamphlet, printed in a clandestine press, were found on the pews of the church of Saint Mary’s, Oxford at the end of June 1581. The sensation was great and the Anglican hunt to find Campion was intensified. In the end a spy, George Eliot, captured him, dragging him on horseback towards London with his arms tied and a sign saying: “Campion, the seditious Jesuit”.

He was imprisoned in the Tower of London. One day, in the presence of three high dignitaries, he was asked whether he recognised Elizabeth as Queen of England. He said yes, but when he was offered the idea of being free, rich and perhaps Archbishop of Canterbury - on condition that he abjured the Catholic faith - he declined the offer. During his more than four months of imprisonment he was tortured twice on the rack and was called to four public disputes with Anglican theologians, always brilliantly conducted. Nevertheless, he was accused of treason and on 20 November, together with other Catholics, he heard his sentence. He and his companions in the faith responded by intoning the Te Deum.

On 1 December he was led to Tyburn gallows, near present-day Marble Arch, where he was hanged, drawn and quartered. Fr Alexander Briant and Fr Rudolph Sherwin, also Jesuits, suffered martyrdom with Campion. All three saints celebrated today are part of the group of the Forty Martyrs of England and Wales (just a few of those who died from the persecution on English soil), canonised together by Paul VI on 25 October 1970.