The principal founder of the Cistercian Order, Saint Robert of Molesme (c. 1029-1111) promoted the return to a simple and austere monastic life, docilely abandoning himself to the action of grace. 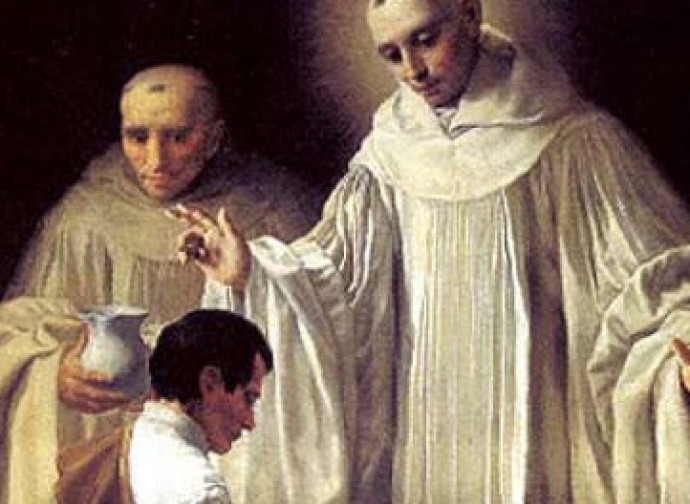 The principal founder of the Cistercian Order, Saint Robert of Molesme (c. 1029-1111) promoted the return to a simple and austere monastic life, docilely abandoning himself to the action of grace. The strong Marian devotion that immediately characterised the Cistercians was anticipated by an episode that tradition places just before the birth of Robert, son of a noble French family from the region of Champagne. His mother Ermengarde, while the child was still in her womb, in a dream saw herself offered a golden ring by the Our Lady, who told her: “I want the child you have conceived to be my fiancé. Here is the ring to seal the contract.”

After being brought up in the faith, Robert began his noviciate at the Benedictine abbey of Montier-la-Celle when he was about 15. Here he distinguished himself for his intense spiritual life, consisting of prayer, fasting, and meditation on the mysteries of the Passion of Jesus. He was soon chosen as prior of that monastery and a few years later moved to Tonnerre, where the monks of the Cluniac abbey of Saint-Michel wanted him as abbot. Probably disappointed by the resistance to his attempt to return to full observance of the Rule of Saint Benedict, he left office to return to Montier-la-Celle as a simple monk. He had a new experience as prior in another monastery, a prelude to a decisive stage in his life, when he retired to a forest with some anchorites who chose him as their guide: with them he founded the abbey of Molesme in 1075, initially consisting of Spartan cells covered with branches, next to a chapel dedicated to the Holy Trinity.

Robert's reputation for holiness attracted new religious to Molesme, but also in this case not everything went smoothly. Partly because of the growing donations received, partly for the entry of people more reluctant to live according to the austere model desired by the saint, discipline was relaxed. In those years Saint Bruno also stopped in Molesme, but then, in search of greater rigour, he decided to retire to a more solitary place, founding the Carthusian Order together with six companions.

Robert himself, noting the impossibility of faithfully observing the rule, left the abbey he had founded a first time, returning there after the entreaty of the religious who had remained in Molesme. However, the attempts to reform the abbey proved vain once again. Therefore, after a period of long prayers and collaboration with other monks who shared his spirituality, Robert turned to the Archbishop of Lyon and papal legate Hugh of Romans, from whom he obtained permission to found a new order.

On 21March 1098, the feast of the Transitus of St. Benedict, Robert and 21 other monks, including the very faithful Alberic and Stephen Harding, founded the Abbey of Citeaux: it was the first act in the creation of the Cistercian Order, so called by the place name Cistercium, which then designated the marshy area where the new monastery was built. Unanimously elected as the first abbot, the saint was able to begin the restoration of the Benedictine rule, pursuing a wise combination of asceticism, liturgical care and a new impetus for manual labour.

But just over a year later Robert was forced to leave Citeaux. To get their founder back, the monks of Molesme had in fact written to Pope Urban II, who delegated the solution of the matter to the Archbishop of Lyon. The latter, in turn, summoned a council of bishops to help him in his decision. Out of obedience, in the summer of 1099, Robert returned definitively to Molesme, where his confreres promised him full observance of the Benedictine rule. Under his leadership the abbey flourished again, while the Cistercian Order became consolidated with Saint Alberic and Saint Stephen Harding.