For the faithful she is the “Saint of impossible cases”... 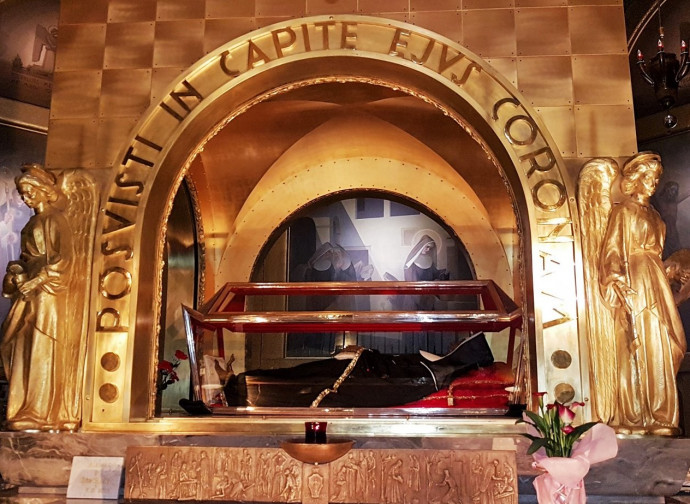 For the faithful she is the “Saint of impossible cases”, as well as an admirable example in all the vocations she embodied in her life: wife, mother, widow, bride of Christ. For this reason Saint Rita of Cascia is one of the figures dearest to Christian piety. Pilgrimages to venerate her body, which bears the signs of her participation in the Passion of Jesus, are often accompanied by graces and authentic spiritual healings, witnessed by the countless ex voto.

Margherita (‘Rita’) Lotti was born around 1381 in Roccaporena, a hamlet of Cascia, in Umbria, at an altitude of over 700 metres, from affluent and very religious parents. According to tradition it was an angel who announced her birth to her mother, after she and her husband for 12 years had asked for the grace of having children.

Rita grew up with a great love for Jesus and Mary. She matured the vocation to monastic life, but around the age of 13, in obedience to her parents, she agreed to marry Paolo di Ferdinando di Mancino. Rita managed to convert her husband - described in hagiographies as a wrathful man - with the sweetness of her character and constant prayer. From her marriage she had two sons, Giangiacomo and Paolo Maria, who as teenagers were orphaned of their father. He was murdered in the middle of the night on his way home, perhaps the victim of an ancient grudge harboured by a former comrade-in-arms. Rita invoked forgiveness for her husband's murderer, and hid his bloodied shirt to prevent her sons from seeking revenge. She prayed to God to take their lives rather than allow their souls to be lost: “I give them to you. Do with them according to your Will”. The two boys fell ill and died a year later.

Now alone and still a young woman, Rita asked to join the Augustinian nuns of St. Mary Magdalene Monastery, but three times her request was refused, perhaps because of the tensions still rife in the village after the murder. In any case Rita eventually managed to quell the avenging intentions of her husband's family and in 1407 she was finally welcomed into the convent. Her most complete and ancient hagiography was written in 1610 by Father Agostino Cavallucci, who based it on the oral tradition of the Saint Mary Magdalene Monastery and the whole of Cascia.

Father Cavallucci reports that Rita’s entrance among the Augustinian nuns took place thanks to a prodigy. While she was gathered in prayer on the so-called “Scoglio” [Rock] of Roccaporena, her three protectors - St. Augustine, St. John the Baptist and St. Nicholas of Tolentino (all venerated in the village in a church very dear to her) - flew her into the convent, whose entrance door was locked. When the stunned nuns saw her in prayer in the choir, they were convinced that the event was the work of Providence. And they welcomed Rita as a sister.

Rita lived in the monastery for forty years, going out only to assist the poor and infirm, especially those suffering from the plague, with which she was never infected. She developed an extraordinary piety towards the Passion of Jesus, on which she meditated continuously. On Good Friday 1432, after having asked for a long time to share some of Our Lord's sufferings, a thorn from Jesus' crown flew down and pierced her forehead, leaving a wound that never healed and gave off an offensive of our.

When the miracle happened for which she is called “The Rose of Roccaporena” she was very ill and fed almost exclusively on the Eucharist. One day she asked a family member to bring her a rose and two figs from her garden (interpreted as a sign of the eternal salvation of her husband and two sons). And her relative - against all her expectations, since it was the middle of winter - actually found them growing there and was able to pick them and take them to the saint.

Rita died on May 22, 1447. Her body was never buried, because of the great veneration that began immediately after her birth into Heaven. Her body was first placed in a coffin called the “humble coffin”. Then, in 1457, it was moved into another sarcophagus, the “solemn coffin”, decorated with images of the saint and bearing the following epitaph: “For fifteen years you suffered from the thorn”. In the same year the notary Domenico Angeli began to record in the Codex miraculorum all the miracles attributed to Rita's intercession (by 1457 there were already 11). Medical examinations carried out on the saint's body in 1972 and 1997 confirmed the presence of an open lesion in the bone on the left side of her forehead.