Among the most depicted saints due to the circumstances of his martyrdom, Peter of Verona (c. 1205-1252) was born from parents involved with Catharism, the heresy that he fought throughout his life, accomplishing numerous conversions. 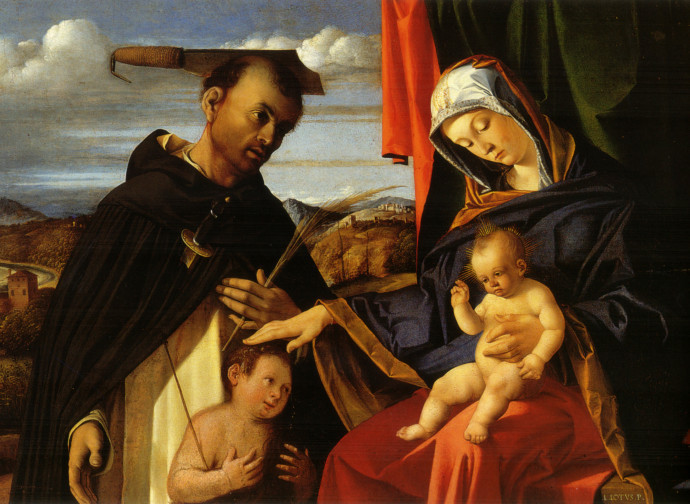 Among the most depicted saints due to the circumstances of his martyrdom, Peter of Verona (c. 1205-1252) was born from parents involved with Catharism, the heresy that he fought throughout his life, accomplishing numerous conversions. He converted to the Catholic faith as a child, learning to recite the Creed at the age of seven, and later studied at the University of Bologna. In this city, when he was fifteen years old, he met Saint Dominic de Guzmán, founder of the Order of the Friars Preachers, which Peter joined. According to the Martyrology, “Peter received the habit from Saint Dominic himself”, who returned to the Father’s House on 6 August 1221.

Peter distinguished himself preaching in various cities in central-northern Italy, from Rome to Milan, where he worked on behalf of the popes to eradicate the Cathar heresy that had spread there like wildfire. In 1244 he was sent to Florence and here too he succeeded in bringing back to the true faith many souls who had fallen into error. His brilliant sermons in the Tuscan city aroused the admiration of the seven founding saints of the Order of the Servants of Mary: he became their spiritual father and after ardent prayers obtained confirmation from the Blessed Virgin that the new order had been born of precise heavenly inspiration.

Peter's success in conversions and his zeal in defending orthodoxy brought him over the years many enemies among heretics and, at the same time, many admirers among Christians, who witnessed his austere life and his great familiarity with the Holy Scriptures. In 1251 Innocent IV appointed him inquisitor for Lombardy, but here the Cathar sects of several cities conspired against him. The idea of dying for his Faith did not frighten him at all. On the contrary, one day he confided to a confrere that every time he lifted the chalice with the Blood of Christ he asked for the grace of martyrdom. On 6 April 1252, while he was walking from Como to Milan, he was attacked by a Cathar assassin who smashed his skull with an axe and mortally wounded one of his confreres, named Domenico, who died after a few days of agony.

Before drawing his last earthly breath, Peter dipped a finger in his blood and wrote on the ground: Credo in unum Deum. The assassin then stabbed him in the chest with a dagger. The martyr's body was immediately transported to Milan (since 1340 it is kept in the splendid Ark of Saint Peter the Martyr, sculpted by Giovanni di Balduccio and placed in the Basilica of Saint Eustorgio). His cult expanded rapidly, also thanks to the miracles attributed to his intercession and his very rapid canonization, which took place just 11 months after his death. His murderer was Carino Pietro da Balsamo; he repented and shortly afterwards entered the Dominican convent of Forlì as a convert: here he spent the last forty years of his life in prayer and penance, under the spiritual guidance of Blessed Giacomo Salomoni. Carino's conversion was such that he died with a reputation for holiness and since 1822 he has been venerated as blessed. And this is certainly one of the greatest graces that flowed from the martyrdom of Saint Peter of Verona.