The apostolic nature of the Church is particularly evident on the feast of St. Matthias, who was called to replace Judas Iscariot in the time immediately following the Ascension. The initiative was taken by Peter, who thus began to exercise the supreme ministry to which Jesus had called him. 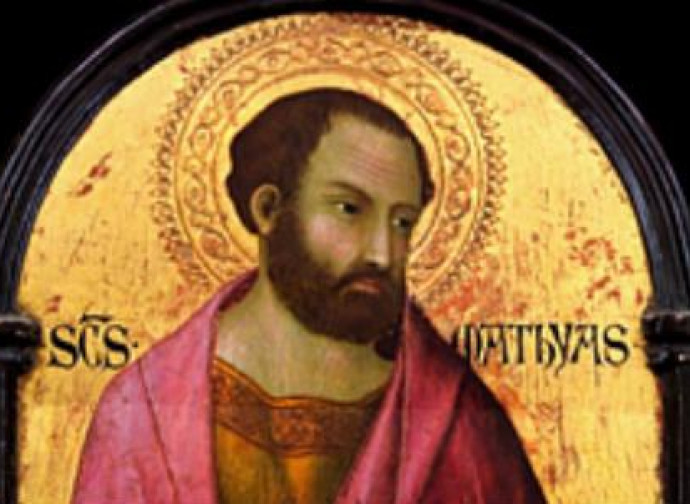 The apostolic nature of the Church is particularly evident on the feast of St. Matthias, who was called to replace Judas Iscariot in the time immediately following the Ascension. The initiative was taken by Peter, who thus began to exercise the supreme ministry to which Jesus had called him. The fact is recounted in the Acts of the Apostles (Acts 1:15-26), where it is reported that Peter took the floor in an assembly of about 120 brothers and showed them the passages of the Psalms (Ps 69:25; 109:8) which foretold the effects of Judas' betrayal: “His dwelling place shall become deserted and no one shall dwell there [it is the famous “Field of Blood”, purchased by the high priests with the thirty denarii returned by Judas and also mentioned in the Gospel of Matthew] and someone else shall take his job”.

Matthias was probably part of the group of the seventy-two (or seventy) disciples, sent in pairs by Jesus to announce the Kingdom of God (Lk 10:1-24). This possibility, referred to as a tradition in the Church History by Eusebius of Caesarea (c. 265-340), is confirmed by the words with which Peter addressed his brothers in faith: “It is necessary, therefore, that among those who were companions for all the time the Lord Jesus lived among us, beginning from the baptism of John until the day He was taken up from us into heaven, one should become, together with us, a witness of his resurrection”.

Matthias was proposed together with Joseph, called Barsabbas and nicknamed Just. After the prayer of the assembly (“You, Lord, who know the hearts of all, show us which of these two you have designated”) the lots were cast, as mentioned several times as a sign of the divine will in the Old Testament (Lv 16:8; Nm 26:52-55; Jos 7:14). And they cast lots for them, and the lot fell to Matthias, who thus reconstituted the number of the Twelve, the image of the new Israel. Matthias then participated with the other apostles and Mary Most Holy in the extraordinary event of Pentecost, with the descent of the Holy Spirit promised by Jesus.

There is no certain news about his subsequent activity. The sources disagree, but according to one tradition he was stoned to death in Jerusalem and was finally beheaded with a halberd, his iconographic attribute. What is certain is that Saint John the Evangelist must also have seen the name Matthias in the famous vision of the Heavenly Jerusalem, described in Revelation: “The angel carried me in spirit to a great and high mountain, and showed me the holy city, Jerusalem, coming down out of heaven, from God, shining with the glory of God, its radiance like a most rare jewel, like a stone of crystal-clear jasper. [...] The walls of the city rest on twelve foundation stones, and on them are the twelve names of the twelve apostles of the Lamb” (Rev 21:10-14). Some of the relics of St Matthias are entombed in a marble ark in the Basilica of Saint Justina in Padua.