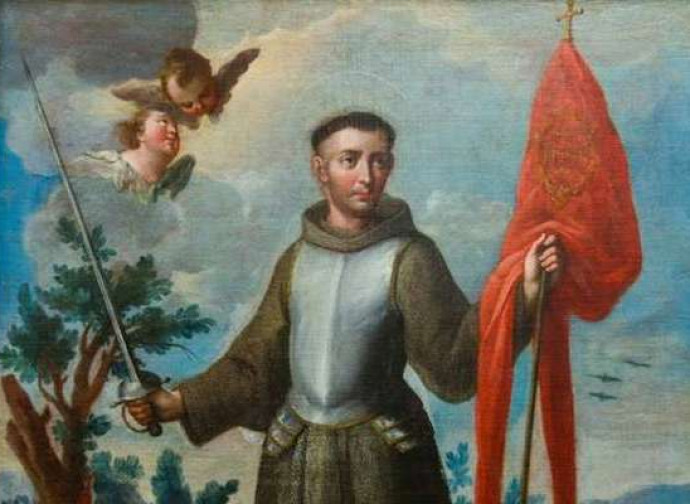 His mother was a noblewoman from Abruzzo, who married a German baron. John's youth was not easy. His father was killed by a rival group when he was a child. He graduated in Law and became a judge in Perugia on behalf of the King of Naples, but when the Umbrian city fell into the hands of the Malatesta family he was imprisoned. His time in prison marked him deeply and it was then that he had two visions: in one Saint Francis appeared to him urging him to work for God, in the other he saw a multitude of people in darkness, with a ray of light filtering through the gloom.

When he was released from prison, John joined the Franciscans. Because of his fame as a jurist and his diplomatic skills he received various assignments - including that of inquisitor - from the popes he met. He was committed to opposing the Fraticelli, a current that had detached itself from the Franciscan Order and had been declared heretical. He became a friend of St Bernardine of Siena and supported both his devotion to the Most Holy Name of Jesus and the reform of the Franciscan Observance (which aimed to observe the Rule in all its rigour but always in obedience to the Church). An excellent preacher, he succeeded in converting many to Christianity, including some Jews. He also went on mission to central Europe to try to convert the Hussites. He gave brilliant sermons against usury. To educate in Christian piety he often talked about the violent death of his father, supporting the beauty of forgiveness.

Already advanced in years, he was urged to preach the crusade against the Turks, who threatened Christian Europe. He travelled for months in Hungary, Germany and Austria, met secular and religious authorities and preached to the people about the need to defend themselves against Muslim expansionism. He managed to gather thousands of men, united them with the forces of the Hungarian John Hunyadi and in July 1456 - while Callistus III set up the midday ringing of bells to invite Christians to pray - defended Belgrade from the siege of the massive Turkish army, led by Muhammad II. “Both advancing and retreating, both striking and being struck, invoke the name of Jesus. In Him alone is salvation!”, he cried during the battle that stopped the advance of the Turks. In the light of the saint's tireless work, it is understandable why Pius XII, on the fifth centenary of his death, called him “Apostle of Europe”, “Athlete of God” and “Model of Catholicity”.