Light years away from the insipid and belittled figure that ecology and pacifism have fashioned him into, Saint Francis of Assisi (1181-1226) was a radical witness to the Gospel, to the love of God in the first place, which inspired him to always be the neighbour ready to help anyone with material and spiritual needs. 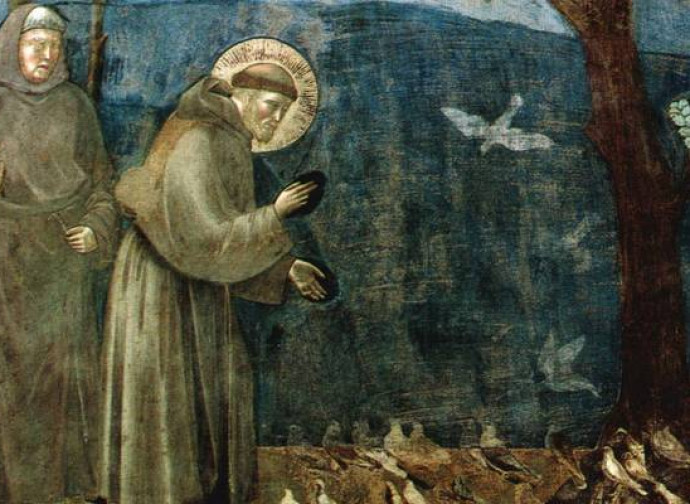 Light years away from the insipid and belittled figure that ecology and pacifism have fashioned him into, Saint Francis of Assisi (1181-1226) was a radical witness to the Gospel, to the love of God in the first place, which inspired him to always be the neighbour ready to help anyone with material and spiritual needs. After a privileged youth, the year he spent in prison marked the beginning of his journey of conversion. The prayer, the nocturnal revelations, the first charitable donations to beggars and lepers did the rest, culminating in the episode at the church of St Damian, where the Crucifix spoke to him: “Francis, go and repair my house which, as you see, is all in ruins”.

Francis worked to repair the little church but later, listening to a passage on the mission of the apostles (Mt 10:9-10), he understood that Christ was exhorting him to the renewal of the whole Church. The young man, who had already been protected by the bishop at the time of the renunciation of his father's goods, dedicated all his strength to the mission to which God was calling him. He did this always in obedience to the Church, in those years struggling with Cathar heresy and challenged by pauperistic movements that did not recognise its authority of divine origin. At the same time he recalled that everyone must conform to God's law: “No man should be obliged by obedience to obey someone where a crime or sin is committed” (Letter to the Faithful, Second Version).

In the poor man he saw the suffering Lord, but for him true poverty was the lack of knowledge of God, beginning with the lack of adoration of His Body and Blood: “The chalices, the corporals, the ornaments of the altar and all that is needed for the sacrifice, must be precious. And if they find the most holy Body of the Lord kept in some unworthy place, they must place It and keep It in a precious place”. He recommended the same for Sacred Scripture. He never gave up proclaiming the truth of Christ, even to the infidels. While on crusade, he was taken prisoner and led before the sultan, to whom he explained that the crusaders (unlike the modern anti-Christian brigade) were acting according to justice in fighting the Muslims to free the holy places of Palestine. The Sultan did not convert, but admired him.

Free from compromises with the world, today the Patron Saint of Italy would be detested by the dominant secularism, which insists on expelling God from the public realm. He admonished the rulers “to attribute to the Lord much honour among the people entrusted to you [...]. And if you do not do this, know that you will have to explain your reasons to God”. He exhorted the priests to remind the people to do penance, warned about the punishments of Purgatory, the eternity of Hell, and called the unrepentant “prisoners of the devil”. Two years before he died he received the stigmata. It was the seal on a life lived in love of Christ and the salvation of souls, as he reminded those present when he obtained the Portiuncula Indulgence: “Brethren, I want to send you all to Heaven!”.

Writings of Saint Francis of Assisi