“The name of Jesus is the glory of preachers, because the shining splendour of that name causes his word to be proclaimed and heard. And how do you think such an immense, sudden and dazzling light of faith came into the world, if not because Jesus was preached?” So said in one of his famous speeches Bernardine of Siena (8 September 1380 - 20 May 1444), the Franciscan saint and tireless preacher who propagated devotion to the Most Holy Name of Jesus. 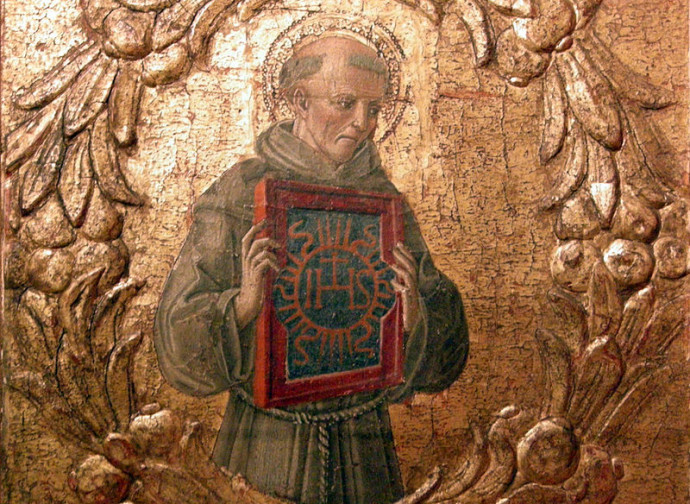 “The name of Jesus is the glory of preachers, because the shining splendour of that name causes his word to be proclaimed and heard. And how do you think such an immense, sudden and dazzling light of faith came into the world, if not because Jesus was preached?” So said in one of his famous speeches Bernardine of Siena (8 September 1380 - 20 May 1444), the Franciscan saint and tireless preacher who propagated devotion to the Most Holy Name of Jesus, giving it liturgical relevance. Bernardine, in the footsteps of the first Christians (“...so that in the name of Jesus every knee may bend in heaven, on earth and under the earth”, wrote for example Saint Paul to the Philippians), considered such devotion necessary to revive the faith: “This is my intention, to renew and clarify the name of Jesus, as it was in the early Church”.

Born in Massa Marittima, Tuscany, into a noble family, he was orphaned of his mother at the age of 3 and father at the age of 6. In 1400 he was already in Siena when, after offering to assist the plague victims of the city, he himself contracted the plague. He recovered from it. In this period the desire to consecrate himself to God matured in him. At the age of 22, he began his novitiate among the Franciscans, adhering to the reform called “of the Observance”, aimed at restoring the original spirit communicated by Saint Francis. He deepened his study of Sacred Scripture, the Fathers of the Church, and medieval theology, especially Franciscan theology, learning to preach and make himself understood by all, thanks to the use of his lively language, rich in images and biblical quotations. For some time a disease in his vocal cords put at great risk the continuation of his preaching, but one day his voice suddenly returned, stronger and clearer than before.

In 1417, he began to wander from town to town, crossing central and northern Italy. Huge crowds flocked to his sermons, in which he addressed issues of faith and morality, including the firm condemnation of usury and avarice. San Bernardine is also remembered in the history of economic thought because he wrote a book entitled On Contracts and Usury, in which he offered a justification for private property and dwelt on the figures of the entrepreneur and the merchant, the honesty of work, etc. He underwent an initial trial for heresy around 1427, brought against him by usurers and related circles. Not only was he completely acquitted of the charges, but Pope Martin V was so impressed by his person that he asked him to preach in Rome, which the saint did for 80 consecutive days.

Also very famous is the 45-day preaching cycle that he held in Siena, from 15 August 1427, in Piazza del Campo. Bernardine used to write his sermons in Latin, but deliver them in the vernacular. The Sienese speeches have come down to us with the title of Vernacular Sermons thanks to the invaluable work of a humble cloth-shearer who transcribed word for word - using waxed tablets - the teachings of the saint. One cannot count the conversions he inspired, witnessed above all by the ranks of people who went to confession and to receive the Eucharist after listening to his sermons.

Bernardine explained that in the name of Jesus, which means “God saves” or “God is salvation”, is enclosed every aspect of Our Lord's earthly life. “What do you think the Gospel is? It is the name of Jesus...”, said the saint. He himself, who for this would later be chosen as the patron saint of advertisers, drew the symbol depicting the Christogram IHS within a golden sun and on a blue background. The sun has 12 serpentine rays, the same number as the apostles and the tribes of Israel. The meaning of the rays was expressed in a litany: I.  Refuge for penitents; II. Banner of Combatants; III. Medicine of the sick; IV. Relief for the suffering; V. Honour of believers; VI. Splendour of evangelizers; VII. Mercy of the working people; VIII. Rescue of the weak; IX. Sigh of the meditators; X. Help of supplicants; XI. Weakness of the contemplators; XII. Glory of the triumphant.

For his use of solar symbolism he suffered new accusations of heresy. But these accusations were also quashed, thanks also to the support of Saint John of Capistrano and to the presence of those symbols in the Old Testament. “My justice will rise like the sun and its rays will bring healing”, says the prophet Malachi.

The other extraordinary fact was Bernardine's ability to open the hearts of the people to this devotion. At the end of his sermons, he had the faithful kiss the wooden tablets on which were written the three letters of Jesus' name (IHS or JHS). The symbol he designed (often enhanced by a cross surmounting the letter H, requested by Martin V) spread everywhere, from churches to the facades of buildings.