He has been called the “Saint Thomas of the East” and is considered the last of the Eastern Church Fathers. He wrote sublime pages about the Blessed Virgin and was able to refute the then widespread iconoclasm. 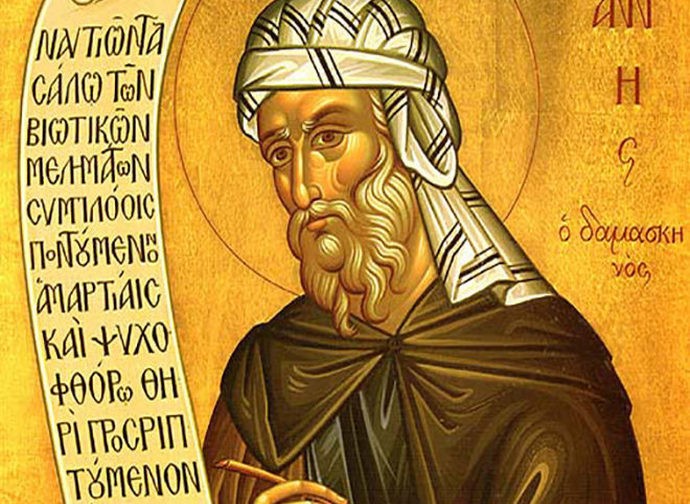 He has been called the “Saint Thomas of the East” and is considered the last of the Eastern Church Fathers. He wrote sublime pages about the Blessed Virgin and was able to refute the then widespread iconoclasm, defending the cult of sacred images with a profound theology based on the foundation of Christian faith: the Incarnation.

Saint John Damascene (c. 676-749) was born into a noble Arab family of Christian faith. In his youth he had been a high official of the Caliph, becoming “an eyewitness of the passage from the Greek and Syrian Christian cultures shared by the Eastern part of the Byzantine Empire, to the Islamic culture, which spread through its military conquests in the territory commonly known as the Middle or Near East”.  (Benedict XVI).

His friendship with the Sicilian monk Cosmo, who was held in Damascus as a slave, contributed to the birth of his vocation to the ascetic life. Thus he entered the monastery of San Saba, near Bethlehem, one of the most flourishing monasteries in ancient times. Here he dedicated himself to contemplation and literary activity. He theologically argued the difference between worship - which can only be addressed to God - and veneration, which can make use of an image to address the one whom the image represents. It was in the middle of the iconoclastic era, under the Byzantine emperor Leo III Isaurian who in 726, instigated by some bishops of Asia Minor, began to fight against sacred images. The Damascene responded to these errors by writing three Discourses against those who calumniate holy images. These writings were condemned after his death by the iconoclasts, but were fully accepted by the Second Council of Nicaea, which in 787 motivated and restored the cult of icons.

The saint's reflection focuses on the transforming reality of the Incarnation, which illuminates the right relationship between man and matter. “In other ages God had not been represented in images, being incorporate and faceless. But since God has now been seen in the flesh, and lived among men, I represent that part of God which is visible. […] I will not cease therefore to venerate that matter through which my salvation was achieved”.  And he continues with the examples, which help to distinguish between profane and holy things: “Is not the wood of the Cross, three times blessed, matter? The redeeming altar which dispenses the Bread of life, is it not matter? And, before all else, are not the flesh and blood of Our Lord matter? Either we must suppress the sacred nature of all these things, or we must concede to the tradition of the Church the veneration of the images of God and that of the friends of God who are sanctified by the name they bear”.

In the same sense John Damascene motivates the veneration of the relics of the saints, since they are partakers of Christ's resurrection and “as far as possible, they have made themselves similar to God by their will and by the indwelling and help of God, they are truly called gods (cf. Ps 82:6), not by nature but by contingency, just as red-hot iron is called fire, not by nature but by contingency and by the participation of fire. It says in fact: Be holy, for I am holy (Lv 19:2)”.

Saint John also transmitted to us a great number of sacred hymns, homilies, treatises against heresies and a compendium of theology known as The Fount of Knowledge. He was in love with God and His creation. He therefore exhorted us to be amazed by all the works of Divine Providence. Leo XIII proclaimed him Doctor of the Church.

Patron of: painters, monks and pharmacists