Saint James of the Marches

Saint James of the Marches (1393-1476) spent his life in the service of the Church, becoming one of the leading figures in the 15th century together with his friends Bernardine of Siena and John of Capistrano. 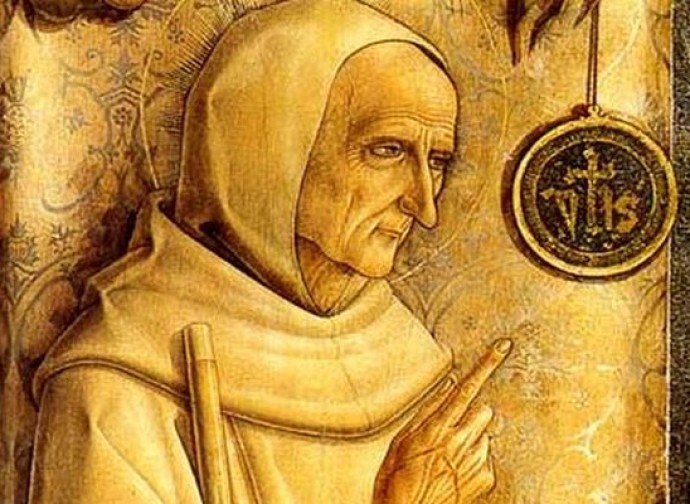 Saint James of the Marches (1393-1476) spent his life in the service of the Church, becoming one of the leading figures in the 15th century together with his friends Bernardine of Siena and John of Capistrano. Together with them, he contributed to the development of the Franciscan Observance (in contrast with the "Conventuals", who were in favour of a softer rule) and to keeping the faith alive through preaching.

Before joining the Observant friars, he graduated in law in Perugia. For some years he practised as judge and notary in Tuscany. Meditation on the Redemption and the beauty of creation gave rise to his religious vocation.

From the teaching and charism of St Bernardine he drew his devotion to the Most Holy Name of Jesus (which he helped to spread). The preaching of the teacher also influenced his vocal and gestural techniques, the structure of his sermons, the use of examples and some of the moral content. James preached mostly in the vernacular, dealing with topics such as superstition, luxury, gambling, blasphemy and usury. To help people in financial difficulties and free them from usury, he promoted the montes pietatis, which granted small loans in exchange for a pledge as a guarantee for their return. The saint offered God continuous penance and ate frugally. He wrote books, encouraged the construction of churches, convents and other public works such as wells and cisterns. He used his legal competence to draw up the statutes of various cities and propose the creation of the institutional figure of the peacemaker.

For his erudition and zeal in the care of souls he became a trusted man of various pontiffs. Among the many tasks he was entrusted with was also that of inquisitor. He opposed the heretical movements of the time such as the Fraticelli (who hired assassins to make an attempt on his life and that of St John of Capistrano), the Bogomils and the Hussites. He travelled a good part of central and northern Italy and preached in other European regions such as Bohemia, Bosnia and Hungary. On several occasions he was assigned the task of preaching the crusade to defend Europe. The Turks besieged Belgrade in 1456, but were forced to flee by the forces united under the leadership of the Hungarian leader John Hunyadi and John of Capistrano.

The last phase of his life was marked by illness, which he united with the sacrifice of Christ. Nevertheless, he found time to found a library in the convent of Santa Maria delle Grazie, in Monteprandone. Here he collected almost two hundred codices (some of them copied in person), including biblical, exegetical and patristic texts. In his suffering he received the sacrament of extreme unction six times. He died saying: "Jesus, Mary... blessed is the Passion of Jesus".