Precursor of the cult of the Sacred Heart of Jesus, Saint Gertrude or Geltrude (1256-1302), known as the Great, was a mystic who spent almost all her life in that exceptional centre of spirituality and culture that was the Monastery of Helfta. 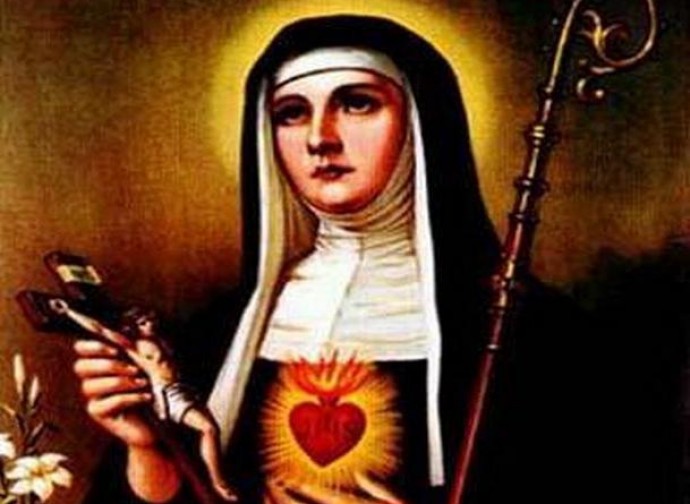 Precursor of the cult of the Sacred Heart of Jesus, Saint Gertrude or Geltrude (1256-1302), known as the Great, was a mystic who spent almost all her life in that exceptional centre of spirituality and culture that was the Monastery of Helfta, “where some of the masterpieces of Latin-German women's religious literature were born” (Benedict XVI).

Already at the age of four Gertrude entered the school of the monastery. Here she learned the disciplines of the trivium and the quadrivium, showing a very lively intelligence and a particular passion for literature and music. Her teacher was St Mathilde of Hackeborn and as a sister she also had St Mathilde of Magdeburg, both of whom were also German mystics. This confirms the extraordinary atmosphere of holiness that at the time pervaded the Monastery of Helfta, where the Benedictine Rule was followed with important Cistercian influences.

The Advent season of 1280 was a pivotal point in her spiritual journey, which until then had been hindered by her attraction to the world and by “such blindness of mind [...] that I would have been able to think, say, or do without remorse anything I liked and wherever I could, if You had not prevented me”, she wrote later, thanking the Lord. She felt disgust at the vanity of her youth. And on 27 January 1281 she had her first vision of Jesus Christ, who appeared to her “brighter than all the light, deeper than all the secrets. He began gently to soothe those disquiets that He had kindled in my heart”. She abandoned profane studies and dedicated herself totally to the sacred, deepening her knowledge of the Bible and the Fathers of the Church. She intensified her prayer, fasting, and night vigils.

Her radical change was followed by a series of mystical experiences, accompanied by illnesses that forged her spirit. One day, during the feast of St John the Evangelist, she saw herself resting her head on the side of Jesus and heard his Sacred Heart beating. She then asked the Apostle if he had heard those heartbeats during the Last Supper and why he had not spoken of them in the Gospel: John replied that this revelation was reserved for future generations so that the world, which would become cold, could rediscover the fire of Jesus' love. Among the other gifts with which God enriched her were the stigmata and a special protection of Our Lady, gifts of which Gertrude felt unworthy: “I have taken so little advantage of Your graces that I cannot bring myself to believe that they were given to me alone, since Your Divine Wisdom cannot be frustrated by anyone”.

She shared these graces through writings such as The Herald of Divine Love (or Revelations), the Spiritual Exercises and various prayers, which in later centuries became familiar to saints such as Philip Neri, Francis of Sales and Teresa of Avila. The value of suffering offered to God, preparation for death, and piety for the souls in Purgatory are some of the recurring themes in the saint's work. Shortly before her death, she was comforted by Jesus after a temptation from the devil, who had upset her by telling her that with her sacrifices for other souls she had neglected her own. “My child, why do you upset yourself? You must know,” the Lord said to her, “that your charity towards others was very dear to me, and for this reason I now free you from all the sufferings to which you were destined. Since I have promised a great reward to those who offer themselves for the salvation of their brothers and sisters, I will increase your joy a hundredfold in Heaven”.