The life of Saint Gabriel of Our Lady of Sorrows, the saint with a smile that shed light on Mary's co-redemptive mission, was similar to the lives of many young people before understanding the transience of earthly things and being dedicated to eternal ones. 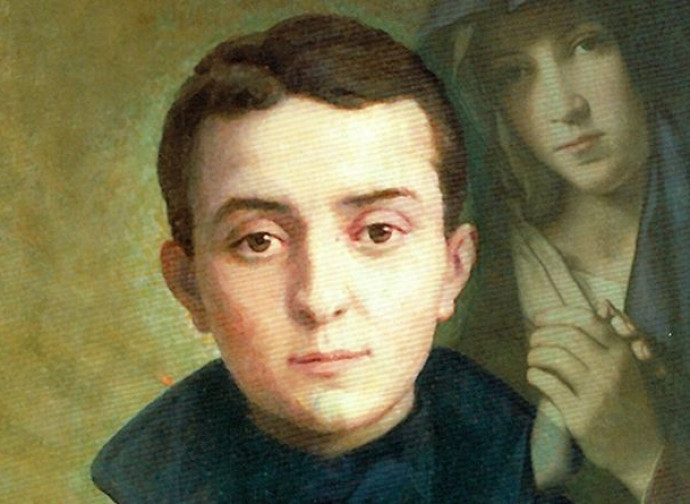 The life of Saint Gabriel of Our Lady of Sorrows, the saint with a smile that shed light on Mary's co-redemptive mission, was similar to the lives of many young people before understanding the transience of earthly things and being dedicated to eternal ones. "What God wants, that’s what I want", he would say enthusiastically. The eleventh of thirteen children, he was born in Assisi as Francesco Possenti (1838-1862), in a wealthy family that relocated to Spoleto in 1841. Losing his mother when he was just 4 years old was a sorrow that marked his spiritual journey. Whenever the little boy looked for his mother, the sky was pointed to: "Your mum is up there." In his room he had a statue of Our Lady of Sorrows with her Son deposed from the cross in her arms, and when he asked where the Madonna was, the answer was the same: "Up there". Thus a tender devotion to the Virgin grew in him, nourished by the Rosary which he recited kneeling beside his father.

Francesco brilliantly completed his studies first at the Lasallians' college and then at the Jesuits', showing a particular inclination towards literary subjects. He excelled at school, dressed elegantly and loved hunting, dancing and going to the theatre. Even as a teenager, he did not neglect Christian practices, constantly being dedicated to the sufferings of the poor and to prayer. Meanwhile, he had witnessed two of his brothers die, and had fallen ill himself, vowing to embrace the religious life if he recovered. When he did recover, his interest in a young woman prompted him to question his vocation, a doubt that became more profound in 1855, with the sudden death of his beloved sister Maria Luisa. The turning point came the following year, on August 22nd, during the procession to celebrate the octave of the Assumption. Kneeling as the statue of Our Lady was carried past him, he perceived a clear inner voice: “Francesco, what are you doing in the world? You are not made for the world. Follow your vocation".

On September 21st, the 18-year-old Francesco received the Passionist habit in Morrovalle (not far from Loreto) with the name of Gabriel of Our Lady of Sorrows. He lived the noviciate in full observance of the rule of the Order founded by Saint Paul of the Cross, between penances and prayers for the eternal and neighbour's goods. A year later he pronounced the vow of the Passionists: to spread the devotion to Christ Crucified. Meditating intensely on the Passion of Jesus and on the mystical link between the sufferings of the Son and those of the Mother (who "gave birth to us on Calvary" by joining her pain to that of our Redeemer and regenerating us as her children), he made a vow to spread the devotion to the Virgin of Sorrows, whom he often called in his letters "our Co-redemptrix" – a title that could be the subject of a future fifth Marian dogma, recognising Mary's special mission in cooperating, as affirmed in the conciliar constitution Lumen Gentium, "in the work of her Son, in order to serve the mystery of Redemption with Him and dependent on Him".

Saint Gabriel, would recite the Rosary of the Seven Sorrows of Mary every day and offered continuous sacrifices, however small (e.g., renouncing some comfort, a useless word, an act of vainglory, etc.). So he wrote to his father, who initially was not convinced of his vocation: "My life is truly full of joy. Father, believe a son who speaks to you with his heart on his lips: I would not barter quarter of an hour standing before our comforter and hope, Mary Most Holy, with a year or however long, among the pleasures and entertainment of this world". When his father fell ill, he urged him to offer his illness to God and meditate, not according to the world but with the help of some good books on the love of Jesus and Mary. "Only dialogue with Jesus and Mary will console you, give you strength, assist you".

In the six years of his religious life, his spiritual father was the Venerable Norberto Cassinelli (1829-1911), who always remained very close to Saint Gabriel and witnessed his beatification. Together with other clerics, Gabriel moved in 1859 to Isola del Gran Sasso, in Abruzzo, where two years later he showed the first symptoms of tuberculosis. In the final phase of the illness, fearing that the devil might tempt him by arousing his pride, he asked his confessor to destroy the diary where he had recorded the graces communicated by the heavenly Mother, who visited him one last time at the moment of his death, at dawn on February 27th, 1862. Towards the end of the century, a great mystic would explore her own Passionist spirituality after reading the life of Saint Gabriel, who appeared to her several times and prayed with her. That mystic was Saint Gemma Galgani.