Saint Cyril of Alexandria (c. 370-444) in the East was called “Seal of all the Fathers” because of the way he expounded the doctrine of the Incarnation and defended orthodoxy, playing a central role in the Christological dispute that led to the Council of Ephesus in 431. 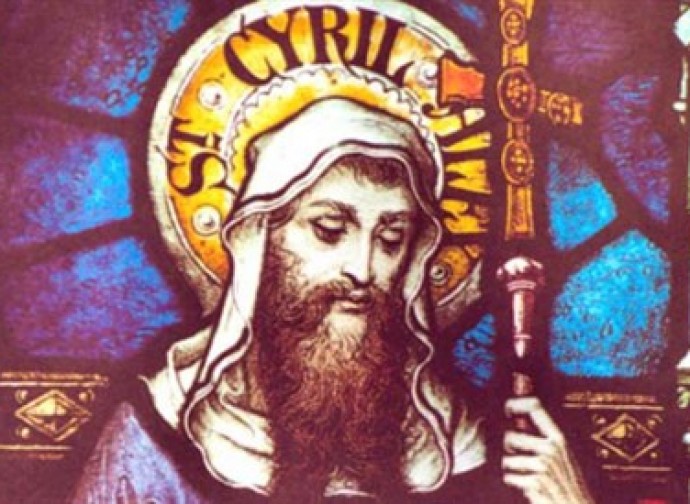 Saint Cyril of Alexandria (c. 370-444) in the East was called “Seal of all the Fathers” because of the way he expounded the doctrine of the Incarnation and defended orthodoxy, playing a central role in the Christological dispute that led to the Council of Ephesus in 431. He assumed the leadership of the Patriarchal See of Alexandria in 412, on the death of his uncle Theophilus, who nine years earlier, during the so-called Synod of the Oak, had succeeded in deposing the bishop of Constantinople, Saint John Chrysostom (†407). For this fact Theophilus was then excommunicated.

Cyril undertook to heal the rift with the Constantinopolitan See, but in 428 the election of Nestorius as patriarch of Constantinople caused a new division between the two patriarchates. Nestorius in fact denied the hypostatic union of human and divine nature in the one person of Christ: he ended up believing in the existence of two distinct persons and therefore refused to call Mary with the title of Theotókos (Mother of God), already widespread among the faithful. Nestorius recognized only the title of Christotókos (Mother of Christ), but he understood it wrongly, believing that Our Lady was the mother of the mere man, separated from the divine Word. Cyril reacted by writing a pastoral letter to the faithful, in which he refuted the errors of Nestorius, with whom he also maintained a personal correspondence to help him recognize the true faith in Jesus Christ.

The saint wrote three letters (the second and the third were then approved by the Council Fathers gathered at Ephesus) to the heretical bishop, in which he expressed his Christological doctrine, in continuity with Scripture and Tradition:  ”Thus, we affirm that the natures are different that are united in one true unity, but from both has come only one Christ and Son; not because, due to their unity, the difference in their natures has been eliminated, but rather, because divinity and humanity, reunited in an ineffable and indescribable union, have produced for us one Lord and Christ and Son”. (Second Letter of Cyril to Nestorius). From this he explained the correctness of the title of Theotókos for Mary, “not as if the nature of the Word or His divinity had its beginning from the Holy Virgin, but because of her was born that Holy Body with a rational soul, to which the Word being personally united is said to be born according to the flesh” (ibid).

In the meantime Cyril had informed the Pope, Saint Celestine, who convened a synod in Rome (August 430) in which the heresy of Nestorius was condemned. But even before this news reached Constantinople, the emperor Theodosius II had decided to call an ecumenical council, where the Holy Father sent his legates, including Cyril, instructing them to preside over the council assembly held in Ephesus in 431. After a tumultuous beginning, the Ephesian Council ended with the condemnation of Nestorianism, the acceptance of Cyril's doctrine and the solemn proclamation of the Divine Maternity of Mary.

Cyril was arbitrarily implicated in the case of Hypatia (the Neoplatonic philosopher killed by the sect of the Parabolani in 415), which was utterly preposterous. Doctor Incarnationis has bequeathed us a great number of writings, from commentaries on various books of the Old and New Testament to treatises in defence of the Trinitarian doctrine, with constant references to the Fathers, including Saint Athanasius (c. 295-373), who had preceded him in the Alexandrian See. Leo XIII proclaimed him Doctor of the Church in 1882.

Catechesis of Benedict XVI on Saint Cyril of Alexandria (October 3, 2007)

Lux Veritatis, encyclical of Pius XI on the 15th centenary of the Council of Ephesus (25 December 1931)