Mary Most Holy Mother of God

With the solemnity of Mary Most Holy Mother of God the Church celebrates and confesses that the Blessed Virgin truly is the Theotókos (in Greek: 'She who gives birth to God') or Deipara (according to the corresponding Latin word). They defined the first Marian dogma in history, intimately linked to the divinity of the Son and the mystery of His Incarnation in the virginal womb of Mary. 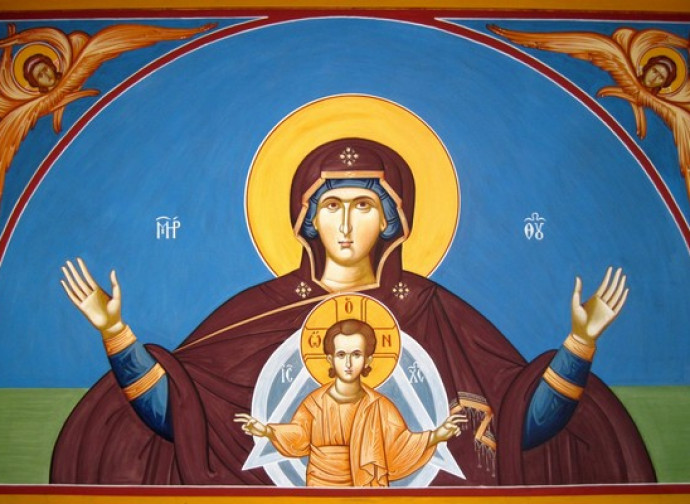 Meditating on Mary's Divine Maternity, don Divo Barsotti (1914-2006) affirmed that the extraordinary characteristic of Christianity is "not only that a creature should call God 'Son', but that the Creator should call one of his creatures 'Mother'. With the solemnity of Mary Most Holy Mother of God (a holiday of obligation in Italy) the Church celebrates and confesses that the Blessed Virgin truly is the Theotókos (in Greek: 'She who gives birth to God') or Deipara (according to the corresponding Latin word). These terms were introduced by the Church Fathers gathered at the Council of Ephesus in 431, as they defined the first Marian dogma in history, intimately linked to the divinity of the Son and the mystery of His Incarnation in the virginal womb of Mary. One cannot be understood except in light of the other, which in turn is glorified by all honour and truth concerning the Mother, a true bulwark against Christological heresies, as shown by the history of this dogma.

The 5th century saw the rise of the heresy of Nestorius, a Syrian archbishop who denied the hypostatic union of human and divine nature in the one person of Christ, by affirming, instead, the total separation between the two natures: this separation, in his view, coincided with the difference between Man and God, conceived of as two different entities; as a corollary to this error, Nestorius claimed that Mary was only the mother of the human person of Jesus, and therefore refused to call her Mother of God.

Saint Cyril of Alexandria (370-444) immediately replied to the heresy in some letters addressed to Nestorius, where he called him to reflect on the truths of the Creed and explained that "the Word, hypostatically uniting to himself the flesh animated by a rational soul became man […]. The natures that are joined together are different, but only one is the Christ and Son". Cyril's conclusion, in conformity with the teaching of the Church Fathers, was this: we call Mary Mother of God not as though the nature of the Word or his divinity received the beginning of their existence from the holy Virgin, but because from her was born the holy body rationally endowed with a soul, with which [body] the Word was united according to the hypostasis, and is said to have been begotten according to the flesh".

The Council of Ephesus affirmed the orthodoxy of Cyril's doctrine, condemned Nestorianism and came to the solemn definition known as Formula of Union: "We therefore confess that our Lord Jesus, the only-begotten Son of God, is perfect God and perfect man , (composed) of rational soul and body; begotten of the Father before the ages according to divinity, born, for us and for our salvation, at the end of time by the virgin Mary according to humanity; which is consubstantial to the Father according to divinity, and consubstantial to us according to humanity, since the union of the two natures has occurred. Therefore we confess one Christ, one Son, one Lord".

With the proclamation of the Divine Maternity of the Virgin Mary, the Council Fathers did therefore honour Our Lady by dogmatically defining the grace received from God, owing to which her cousin Elizabeth, full of the Holy Spirit, had greeted her ("loudly", says the evangelist Luke) as "blessed among women" and "mother of my Lord". At the same time, they honoured the Holy Trinity for the masterpiece made in Mary through the Incarnation (Summum Opus Dei, as Blessed John Duns Scotus would later call it), as well as protecting Christ from Nestorianism as well as other heresies already condemned by previous councils, but still alive at the time, such as Arianism and Adoptionism, which both denied the divinity of the Son.

The profound link between the mystery of the Mother and the Son also transpires from the decision to celebrate this solemnity on January 1st, within the Octave of Christmas, with a liturgy that remembers the circumcision of Jesus – which took place eight days after His birth , according to Jewish prescriptions – and therefore the first blood shed by the Divine Child for the salvation of humanity: just then the name Jesus was imposed on him (Lk 2: 21): "God saves", as he had been called by the angel. By virtue of her obedience to the divine will, Mary participates in a unique way in the plan of salvation and in the work of the Son, through "serving the mystery of the redemption under him and with him" (Lumen Gentium).

Lux Veritatis, encyclical of Pius XI in the 15th centenary of the Council of Ephesus (25 December 1931)

Documents of the Council of Ephesus