Founder of churches and monasteries, St Cedda (†664) carried out fundamental work in the complex historical and religious framework of 7th century Britain. At the time, the revival of paganism - following the Anglo-Saxon invasion that had begun two centuries earlier - made a new evangelisation necessary. 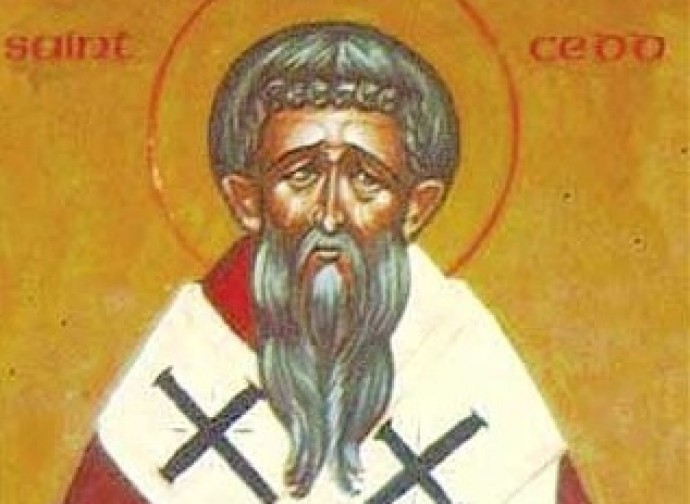 Founder of churches and monasteries, St Cedda (†664) carried out fundamental work in the complex historical and religious framework of 7th century Britain. At the time, the revival of paganism - following the Anglo-Saxon invasion that had begun two centuries earlier - made a new evangelisation necessary. Much of the information about him comes from Saint Bede the Venerable (673-735), Doctor of the Church and author of the Ecclesiastical History of the English People.

Cedda was born into an unusual family for the number of vocations: three of his brothers were priests and one of them, Saint Chad of Mercia, became bishop. He was brought up with Chad at Lindisfarne (the ‘Holy Island’) by Saint Aidan, from whom he learnt austerity and detachment from worldly pleasures, together with an interest in eschatology and missionary drive. Oswiu, King of Northumbria, sent him first to evangelise the Central Angles and then, at the request of King Sigeberht II, who asked for help to convert his people, to Essex. After the various conversions he managed to inspire, Cedda was consecrated bishop of the Eastern Saxons by Saint Finan.

Fearless of the powerful, he excommunicated a nobleman because of an illicit marriage and forbade Christians to accept his hospitality. When Sigeberht II happened to disobey the ban, Cedda predicted his earthly end: “Since you did not refrain from entering the house of a lost and damned man, this same house marked your death”. Sigeberht, who had prostrated himself to ask forgiveness for his disobedience, was indeed killed by two of his blood relatives (perhaps one of them was Swithelm, his successor to the throne of Essex, who later converted), who reproached him for being too inclined to forgive. We also owe this story to St Bede, who interpreted the fact as follows: “The death of this pious king was such that he not only did penance for his outrage but even increased his merit; for it was a consequence of his piety and his observance of Christ's commandment”.

Saint Cedda played a decisive role in the Synod of Whitby, desired by the King of Northumbria. The Synod had been convened mainly to establish whether the calculation of Easter Day had to follow the system in force in the Roman Rite or the one supported above all by the Scottish Abbey of Iona and at the time widespread in some Anglo-Saxon kingdoms. This was one of the few existing differences with Rome (the Synod also decided on the monastic tonsure), so certainly one could not speak of a “Celtic Church” according to the dichotomy invented centuries later by Protestantism. The work was hampered by linguistic misunderstandings, but Cedda’s knowledge of languages and the general trust he enjoyed helped to achieve the outcome: Oswiu, after asking the participants whether they recognised that Christ had founded the Church on Peter, decided that the Roman dating of Easter would be adopted in Northumbria.