A distinguished moral theologian, composer of famous melodies in Neapolitan and Italian (including the Christmas carol “Tu scendi dalle stelle”), able to speak of the truths of faith to both learned and simple people, author of over a hundred works, some of which have been translated into more than 70 languages. 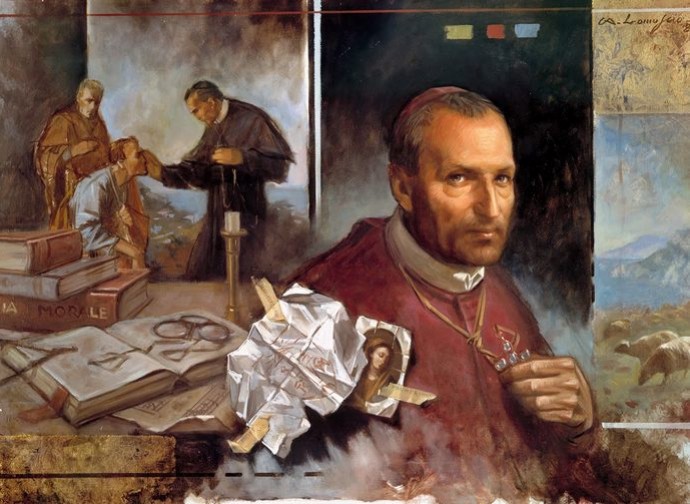 A distinguished moral theologian, composer of famous melodies in Neapolitan and Italian (including the Christmas carol “Tu scendi dalle stelle”), able to speak of the truths of faith to both learned and simple people, author of over a hundred works, some of which have been translated into more than 70 languages. Saint Alphonsus Maria de' Liguori (1696-1787), founder of the Redemptorists and honoured by the Church with the title of Doctor Zelantissimus, lived almost 91 years. His earthly life can well be considered a shower of heavenly graces, at a time when the Enlightenment was spreading its errors in Europe. In the “century of Enlightenment” that excluded God from its horizon, the saint put reason into perspective and wrote basic works of apologetics. One of these is The Truth of the Faith, which begins with a prayer to Mary and develops into three parts aimed at disproving materialists who deny the existence of God, deists who reject revealed religion, sectarians who deny the truth and uniqueness of the Catholic Church.

Alphonsus was born in a suburb of Naples, the first of eight children of a noble and rich family. From his youth he showed his charity in visiting the sick and helping the needy. When he was only 16 years old he graduated in civil and canon law and for eight years he practised brilliantly the profession of lawyer. He abandoned it after losing a case, perhaps because he was disappointed by the legal environment. He decided to consecrate himself to God and at the age of thirty he was ordained a priest.

He began to preach among the most humble classes of Naples, in houses and shops, urging the people to abandon their vices and strengthen their virtues with the help of prayer. The results were extraordinary. There was an authentic moral and social recovery, which culminated in what went down in history as the “Serotine Chapels”, because the archbishop encouraged the saint to hold his meetings in the chapels to involve even more of the faithful.

In 1732 he left his Naples and on 9 November he founded what is today the congregation of the Most Holy Redeemer in Scala, with the aim of preaching to the poor in the countryside. Despite the obstacles encountered in the Kingdom of Naples, where secularism was beginning to emerge, the Redemptorists gradually established themselves thanks to their simple style of preaching. In the meantime Alphonsus devoted himself to his writings, among which stand out - in addition to the monumental Moral Theology – some texts of more immediate nature. These are classics of Christian spirituality, such as Practice of the Love of Jesus Christ (“the most devotional and useful of my works” he defined it in 1768) and The Glories of Mary, which reflects his Christocentric and therefore genuinely Marian piety. To honour the Incarnation he always knelt when the bells rang at noon, wherever he was.

He loved the Eucharistic adoration: “Of all devotions, this of adoring the sacramental Jesus is the first after the sacraments, the dearest to God and the most useful to us. And he taught us to entrust ourselves to Our Lady as a privileged and sure way towards her Son. “Most devoted to Mary, he illustrates her role in the history of salvation: partner of the Redemption and Mediatrix of grace, Mother, Advocate and Queen”, Benedict XVI explained in a catechesis on the saint. Against the Jansenist heresy, which distanced the people from the sacraments, he urged the faithful to approach Confession frequently. And he reminded priests to be visible signs of the Mercy of God, so as to encourage the conversion of the sinner. Central, for eternity, is constancy in prayer: “God does not deny anyone the grace of prayer, by which one obtains help to overcome all lust and temptation. And I say and I will always say and I will always reiterate, as long as I live, that all our salvation lies in prayer”.

In 1762 Clement XIII wanted him bishop of Sant'Agata de' Goti, a ministry he renounced 13 years later for an increasingly serious arthrosis that bent his spine. Some time earlier Alphonsus had already written another precious ascetic work, Preparation for Death, in which he emphasized the importance of instructing the faithful on the Four Last Things (death, judgment, Hell, Paradise), to help the soul to live and die in the grace of God. Blessed Pius IX appreciated this book so much that one day he strongly recommended it in a seminar, even though the rector had told him that his students already knew it: “They should reread it, they should reread it again, because knowing it by heart as well is always fruitful”. Needless to say that Saint Alphonsus was very well prepared for his death. On 29 July 1787, at the beginning of his agony, he asked for an image saying: “Give me Our Lady”. On 1 August he returned to the house of the Father, while the bells rang out the Angelus.