Latin Mass, the Pope's clampdown: protests on the way

While a schism is underway in Germany, there are protests against the Latin Mass inside the Vatican. Rumours of a restrictive revision of Summorum Pontificum have filtered through the latest Italian Bishops' Conference assembly after the Pope's speech. Confirmations of this are coming from France. It would be a slap in the face of Benedict XVI who signed the motu proprio Summorum Pontificum, but behind the scenes tug-of-war is happening between the Congregation for the Doctrine of the Faith and the Vatican Secretariat of State. Faithful from well-formed groups supporting the Latin Mass stand ready to descend on Rome and for what would be a clamorous protest. 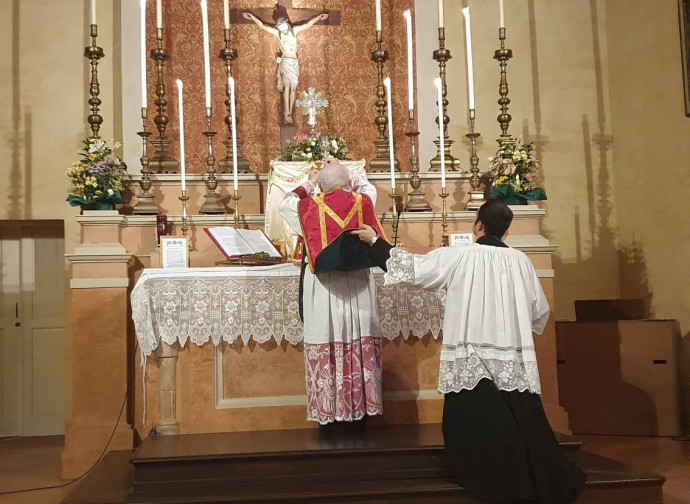 While half the German Catholic Church is "going right along with" pro-Protestant schismatic winds during Rome's ongoing silence, Vatican daggers are pointing directly at the Latin Mass. According to Pope Francis, when speaking at the Italian Bishops' Conference assembly held last 24 May, the Church must be on guard against so-called the "rigid Catholics" who are now being accepted in seminaries.

A rumour is mounting these days about a restrictive revision of Benedict XVI's motu proprio Summorum Pontificum which in 2007 liberalized the so-called Tridentine Mass and codified the extraordinary form of the only Roman Latin-language rite. The news, as published exclusively by the specialised Italian website Messa In Latino ("Mass in Latin), is also being confirmed France where the French website Paix Liturgique reported on further details about the meeting between Pope Francis and a few Italian bishops in backroom discussions during the Italian Bishops' Conference meeting last Monday.

According to Messa In Latino, which quoted sources from within the Italian Bishops' Conference, the pope has announced to bishops the imminent restrictive reform of the 2007 motu proprio signed by Benedict XVI. What, in particular, will be changed? The ongoing patchy information does not allow for official confirmation, but it appears that the intention is to return to circumstances prior to the reform, that is, to times when an 1984 papal indult permitted the Mass to be celebrated in Latin but only with consent obtained from the local diocesan bishop.

The greatness of Benedict's motu proprio was precisely that of liberating the ancient Latin Mass from the ghetto into which it had been forced following Vatican Council II and freeing it from virtual exclusive practise by so-called Lefebvrites. There is a widespread misconception that the motu proprio was drafted to accommodate the community founded in Econe by the French bishop Marcel François Marie Joseph Lefebvre. In reality, the Summorum Pontificum motu proprio has never been given any consideration by the Lefebvrites, because it codifies the existence of a single rite, in two forms, ordinary and extraordinary. The Latin rite it has benefited hundreds of thousands of faithful who formed sable communities who regularly celebrate  the old Mass in a  modern world and with many spiritual fruits, including a growing number of priestly vocations.

Today, almost 14 years after Summorum Pontificum was issued, there are numerous faithful who attend Latin Mass even though they do not reject its ordinary form in native langauges. There are also many priests who, by celebrating it, admit they have gained spiritual and pastoral benefits even when saying Mass in the novus ordo, thanks to having gained new insights from the old rite. This must a thorn in the side of the latest Vatican development, hence  references to the rigidity of certain seminarians. It is, however, a form of rigidity which, coincidentally, is always liturgical and never theological nor psychological.

Likewise, it must bother you when people say  the followers of the old Mass are really nostalgic. It should, since the argument has no legs to stand on. In fact, faithful who are attracted to the extraordinary form in Latin are young people, born longer after the Second Vatican Council. They are not at all attracted to "vintage" liturgical forms. They've simply discovered a treasure and desire to continue cultivating it as the Mass for all ages.

According to Messa in Latino the Vatican is already working on the third draft of a reform, which the pope would be ready to sign but which would be “sensational” because it would spell defeat, correct and  effectively limit the moto proprio reform of a still-living pontiff. This is why many believe that a revision of Summorum Pontificum would first of all be a slap in the face to Benedict XVI, who, in promulgating it, hoped for a positive reciprocal influence between the two old and new forms.

Paix Liturgique imagined the circumstances in which the pope would speak about it. "Then, once the journalists had left the debate room," reads the site in Messa in Latino's translation, "the Pope addressed a topic that many Italian bishops want: the elimination of Summorum Pontificum. Francis confirmed the forthcoming publication of a document that he was urged to draft and which is intended to 'reinterpret' Benedict XVI's motu proprio. Its publication has actually been delayed, as the document seems to have provoked objections and has experienced some setbacks, especially from Cardinal Ladaria at the Congregation for the Doctrine of the Faith, who claimed it would cause uncontrollable unrest and opposition around the world. Despite this, the Secretariat of State is reportedly pushing for its release, the essential provisions of which would be as follows:

- communities celebrating according to the ancient form can continue to do so;

- on the other hand, diocesan priests would have to obtain specific permission.

It is obvious that this document, inapplicable in many countries including France, will above all have largely a symbolic meaning: making the celebration of the traditional Mass no longer a right, but a tolerated exception."

A clash is therefore looming between the Congregation for the Doctrine of the Faith, which is aware that a revision of Benedict's motu proprio would represent  a wound to thousands of faithful and the Secretariat of State.

It is no small coincidence that France is one of the countries most opposed to this big change, given that the extraordinary form has become so popular beyond the Alps, as well as in the United States where there has been a real spiritual and liturgical rebirth.

And it is precisely from France - according to what the Daily Compass has been able to ascertain - that the most organised reactions are gaining momentum and aiming to descend on Rome with a clamorous demonstration in the form of a filial appeal to save Benedict's motu proprio. Thousands of faithful have been urged to unite to save the ancient Mass and oppose its limitation. It would be disruptive, but also dangerous for the Vatican. This all the more true considering a schism is underway in Germany right before the eyes of everyone and as  action  would be taken against thousands of faithful who merit no reproach,  but nevertheless will have their liturgical sensitivities restricted and be deprived this right.

It would be an incomprehensible misunderstanding for a very large section of the Church to be contemptuously labelled as “rigid” or “traditionalist” but who is expanding to include faithful who until a few years ago would never have spent a penny to support the old Mass but today are positively attracted to it.