Yes, Christ is truly risen and we are witnesses of this.

We too are there with the three women going to the tomb before dawn to anoint the lifeless body of Jesus. Their loving concern is our concern too. With them we discover that the large tombstone has been rolled away and that the body is no longer there. “He is not here”, the angel proclaims, pointing to the empty tomb and the winding cloth on the ground. Death no longer has power over him. We publish the homily of Saint pope John Paul II at the Easter Vigil, 22 April 2000, as a help to live the meaning of Easter. 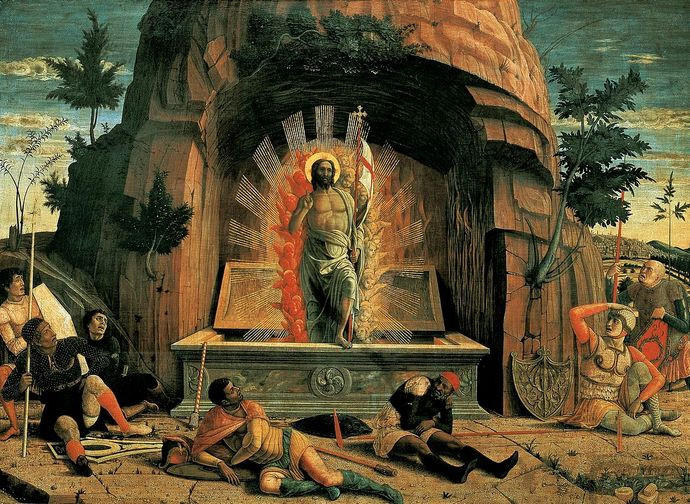 The tomb of Jesus had been closed and sealed. At the request of the Chief Priests and the Pharisees, soldiers were placed on guard, lest anyone steal the body (Mt 27:62-64). This is the event from which the liturgy of the Easter Vigil begins.

Those who had sought the death of Christ, those who considered him an “imposter” (Mt 27:62), were keeping watch beside the tomb. They wanted him and his message to be buried for ever.

Not far away, Mary was keeping watch, and with her the Apostles and a few women. In their hearts they pondered the distressing events which had just taken place.

2. The Church keeps watch this night, in every corner of the world, and she re- lives the principal stages of salvation history. The solemn liturgy which we are celebrating is the expression of this “keeping watch” which, in a way, evokes the watch kept by God himself. The Book of Exodus tells us: “It was a night of watching by the Lord, to bring them out of the land of Egypt. This night is a night of watching kept to the Lord in every generation” (Ex 12:42).

In his provident and faithful love, which transcends time and space, God keeps watch over the world. As the Psalmist sings: “He sleeps not nor slumbers, Israel’s guard... The Lord is your guard ... The Lord will guard you... both now and for ever” (Ps 121:4-5,8).

The passage from the second to the third millennium, which we are experiencing, is also guarded in the mystery of the Father. He “is working still” (Jn 5:17) for the salvation of the world, and through his Incarnate Son he leads his people from slavery to freedom, from death to life. All the “work” of the Great Jubilee of the Year 2000 is in some way linked to this night of Vigil, which brings to fulfilment the night of the Lord’s Nativity. Bethlehem and Calvary evoke the same mystery of the love of God, who “so loved the world that he gave his only Son, that whoever believes in him should not perish but have eternal life” (Jn 3:16).

3. As she keeps watch on this Holy Night, the Church closely scrutinizes the texts of Sacred Scripture. They portray God’s plan from Genesis to the Gospel and, together with the liturgical rites of fire and water, give this remarkable celebration a cosmic dimension. The whole created universe is summoned to keep watch this night at the tomb of Christ. The history of salvation passes before our eyes, from Creation to the Redemption, from the Exodus to the Covenant on Mount Sinai, from the Old to the New and Eternal Covenant. On this Holy Night, God’s eternal plan reaches fulfilment, the plan which embraces the history of humanity and of the cosmos.

4. At the Easter Vigil, “the mother of all vigils”, everyone can likewise acknowledge their own personal history of salvation, which has its basic moment in our rebirth in Christ through Baptism.

In a very special way, this is your experience too, dear brothers and sisters who are about to receive the Sacraments of Christian Initiation: Baptism, Confirmation and the Eucharist.

You come from various countries throughout the world: Japan, China, Cameroon, Albania and Italy.

The variety of your native countries points to the universality of the salvation brought by Christ. Soon, dear friends, you will become intimate sharers in the mystery of the love of God, Father and Son and Holy Spirit. May your lives become a song of praise to the Most Holy Trinity and a witness of love which knows no limits.

The tomb! Behold the place where they buried him (cf. Mk 16:6). There the community of the Church throughout the world is spiritually present. We too are there with the three women going to the tomb before dawn to anoint the lifeless body of Jesus (cf. Mk 16:1). Their loving concern is our concern too. With them we discover that the large tombstone has been rolled away and that the body is no longer there. “He is not here”, the angel proclaims, pointing to the empty tomb and the winding cloth on the ground. Death no longer has power over him (cf. Rom 6:9).

Christ is risen! So the Church proclaims, at the end of this Easter night, even as yesterday she proclaimed Christ’s death on the Cross. It is a proclamation of truth and life.

Yes, Christ is truly risen and we are witnesses of this.

We proclaim this witness to the world, so that the joy which is ours will reach countless other hearts, kindling in them the light of the hope which does not disappoint.