We want to read the China-Holy See Agreement

The letter Cardinal Re sent to his brother cardinals of the Sacred College, aimed at censoring Cardinal Zen on the question of the Church in China, contains astounding affirmations concerning doctrinal changes that are implied by the Agreement between the Holy See and China – and not only for China but for the entire Church. This is the main reason that the cardinals must now forcefully demand that the contents of the Agreement be revealed. 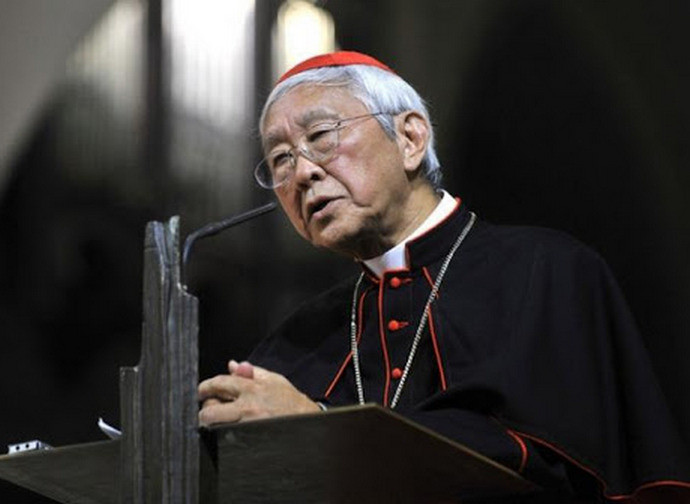 It is almost impossible to overemphasise the importance and gravity of the letter of the Dean of the College of Cardinals, Giovanni Battista Re, sent to all of his brother cardinals in order to censure Cardinal Joseph Zen. We have already examined the principal passages of the letter (here), which sought to demonstrate the necessity and value of the 2018 provisory Agreement with the Chinese government on the appointment of bishops. And we have also examined in depth its alarming reference to the potential legitimacy of independent churches (here).

We could continue by highlighting that this is the first time that a Church authority has essentially invited all the cardinals to isolate one of their brothers. This is the “Chinese method” which has now become practice in the Vatican: whoever does not adapt to the party line, whoever obstructs the path towards the bright future ahead must either be corrupt or a bourgeois counter-revolutionary. Cardinal Zen is hindering  “the magnificent and progressive fate” of Chinese Catholicism. The definitions may change but the substance doesn’t.

We could further emphasise the serious falsification of attributing moral paternity of the September 22, 2018, agreement between the Holy See and China to Saint John Paul II and Benedict XVI (as well as declaring that Benedict himself specifically approved this agreement). This too has become a method of government: every time this pontificate makes a controversial or contested decision, its line of defence is inevitably to say that it is acting in continuity with its predecessors, even when it decides to tear down what John Paul II himself built (as in the case of the John Paul II Institute for Marriage and Family and the Pontifical Academy for Life).

In his letter of solidarity with Cardinal Zen issued on Saturday (here), Archbishop Carlo Maria Viganò, speaks of “deception in the Vatican […] set into the system.” This is a strong expression, but no doubt if we wait a day or two we will see an erudite article from Andrea Tornielli, the great head of Vatican communications, who will explain to us how and why Pope Francis is doing nothing other in China, than applying the principles established by his predecessors. He will say this despite all the evidence, so much so that even Cardinal Re himself could not refrain from talking about an “epochal change” that is being undertaken.

But there is another question that is the most urgent matter to address today: the contents of the secret Agreement between the Holy See and China. Cardinal Re speaks about it as if it were something known and obvious, but this is not so. The contents are secret. The only detail that has been revealed by the Dean of the Sacred College is that it “provides for the intervention of the authority of the Pope in the process of the appointment of Bishops in China.” But this statement is highly ambiguous, contains only the bare minimum necessary: as if to say the Pope might not intervene in the appointment of bishops.

But the question is: at what point does the Pope intervene? There is quite a difference between a process where the (communist-party-aligned) Patriotic Association chooses bishops, with the Pope acting merely as a notary to the decision or at most opposing the most unacceptable nominations, and a process where the Pope names the bishops himself while seeking to avoid the names that are most disagreeable to Beijing. Until now we have only seen the Vatican accepting illegitimate and highly questionable bishops and removing legitimate bishops. The case of the pending appointment of the next archbishop of Hong Kong which will be filled with a pro-Beijing candidate (see article here), makes us fear the worst. This question is fundamental not only for Chinese Catholics but also for the universal Church.

This is only one reason why there is an urgent need to make the contents of the agreement public. For the past year and a half we have seen the increase of pressure on bishops by the communist party, the intensification of the persecution of Catholics, and the Holy See consistently closing an eye (actually both eyes) to the violence of the regime, and yet it continues to keep the contents of the agreement hidden. This is intolerable.

Even more so now that Cardinal Re has drawn Benedict XVI into the dispute by attributing the paternity of this text to him. Moreover, how can he complain about “delays” in China in the implementation of the Agreement if Chinese Catholics don’t even know what it says? Asking for obedience to rules that are unknown is simply folly. The cardinals who have received Cardinal Re’s letter have the duty to demand the disclosure of the contents of the agreement.

Concern for the destiny of Catholics in China and respect for their dignity should have already been motive enough for the cardinals to make an explicit and decisive request. But the letter of Cardinal Re introduces a further point that regards the entire Church, not only the Chinese Church. The cardinals above all, along with all of the faithful, cannot pretend it doesn’t matter: Cardinal Re says, referring to the legitimisation of the “independent churches,” that we are at a moment of “epochal change” that has doctrinal and practical consequences, and not only for China. In short, the Agreement with the Chinese government initiates doctrinal changes that concern the entire Church.

And so should the cardinals be silent? And the bishops? And all of the faithful? A change is being announced in the very conception of the Church and they are supposed to pretend it’s no big deal? It is clear that we are now far beyond a personal dispute with Cardinal Zen: the elimination of Zen from the scene is just a preliminary to changes being made to the entire Church. It is not possible to be silent: everyone has a duty to ask in a loud voice that the contents of the agreement with China be divulged.

But what could these doctrinal changes be? Cardinal Re does not explain it clearly, but certainly it concerns, at least, the question of National Churches. And here we see even more clearly the radical difference between this pontificate and that of Benedict XVI. One may think that the potential legitimisation of the “independent Churches” is merely an evolution of the powers given to the national bishops’ conferences, which Pope Francis wants to increase. He has said so explicitly in Evangelii Gaudium (2013) where he expresses his hope for “a juridical status of episcopal conferences which would see them as subjects of specific attributions, including genuine doctrinal authority (32).”

Such a conception is completely opposed to that of Saint John Paul II and Benedict XVI. John Paul II’s 1998 Motu Proprio Apostolos Suos concerning “the theological and juridical nature of the bishops’ conferences” sought to prevent bishops’ conferences from issuing doctrinal declarations in contrast to the universal magisterium of the Church, or creating separations between the national Churches and Rome.

For his part, Benedict XVI, when he was still cardinal, clarified in his famous 1985 interview with Vittorio Messori,The Ratzinger Report, that “we must not forget that the episcopal conferences have no theological basis, they do not belong to the structure of the Church, as willed by Christ, that cannot be eliminated; they have only a practical, concrete function.”

Whatever the meaning of the legitimacy of the independent Churches, we are looking at two diametrically-opposed conceptions. An immediate clarification is required, beginning with the disclosure of the contents of the Agreement between the Holy See and China