The Daily Compass has received an explosive letter signed by the Dean of the College of Cardinals, Cardinal Giovanni Battista Re, that fiercely attacks Cardinal Joseph Zen, the Bishop Emeritus of Hong Kong, who has been critical of the secret agreement between China and the Holy See that has resulted in the increased persecution of Catholics. The letter contains misleading statements, affirming that there is a continuity between the approach of this pontificate with that of previous pontificates, when in fact no such continuity exists. Furthermore, it makes very grave misrepresentations, attributing the authorship of the present secret agreement to Benedict XVI and declaring a change in doctrine regarding the possibility of independent Churches.
- THE LETTER 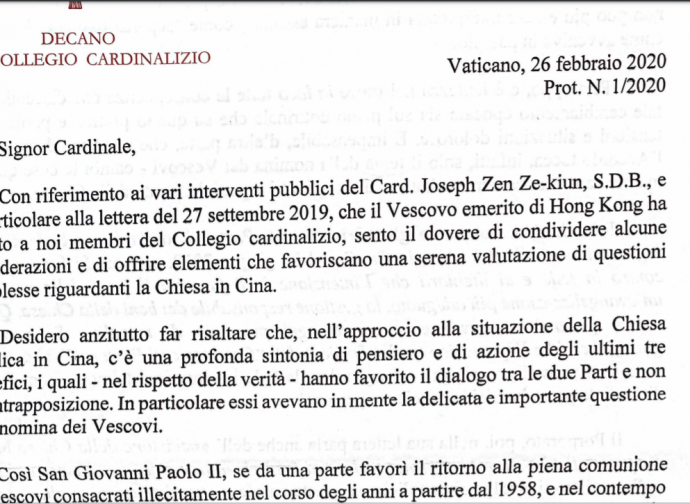 Cardinal Joseph Zen is an obstacle for the Church in China, and from now on the Catholic Church can be formed by independent churches. This is the essence of an explosive and incredible letter sent on February 26 to all the cardinals by the Dean of the Sacred College, Cardinal Giovanni Battista Re, that The Daily Compass has received. It marks a fierce and unheard of frontal attack on the 88-year-old Bishop emeritus of Hong Kong, the intrepid opponent of the secret agreement between China and the Holy See signed in Beijing on September 22, 2018.

It is an unprecedented gesture, made even more significant by the fact that is the first official act (protocol number 1/2020) of the new Dean of the Sacred College. Re was appointed as Dean on January 18 as a result of the Motu Proprio by which Pope Francis surprisingly made the deanship a position that now has a 5-year term limit, thereby retiring Cardinal Angelo Sodano.

The letter is intended to be a response to the letter that Cardinal Zen addressed to his brother cardinals last September 27, but Cardinal Re also makes explicit reference to various other interventions by Zen. The cardinal is well-known for speaking out boldly on behalf of so-called “clandestine” Chinese Catholics who are being humiliated and condemned by the 2018 agreement that still remains secret.

The first point of the letter declares the alleged continuity between Pope Francis and his predecessors regarding possible agreements with China: “In their approach to the situation of the Catholic Church in China, there is a profound symphony of the thought and action of the last three pontificates, which out of respect for the truth have favored dialogue between the two parties, not opposition.” Thus it attributes to Saint John Paul II “the idea of reaching a formal agreement with the governmental authorities on the appointment of bishops,” recalling that he “favored the return to full communion of bishops consecrated illicitly over the years, beginning in 1958.”

Cardinal Re then launches into a direct attack on Cardinal Zen, whose crime is that he has said many times that “it would be better to have no agreement rather than a ‘bad agreement.’” According to Re, “the last three popes did not share this position and supported and accompanied the drafting of the agreement that, at the present time, seemed to be the only one possible.”

These affirmations made by Cardinal Re constitute a grave distortion of reality, because it is obvious that Saint John Paul II and Benedict XVI took an approach that is markedly different from that of the present pontificate. If it is true that they had a great desire for dialogue with China and dedicated many efforts to it, it is equally true that this dialogue was exclusively a function of their goal of helping the Chinese Church – divided between the “patriotic” church and the “clandestine” church – to be reconciled.

At the same time, they consistently reaffirmed the non-negotiable points for an agreement, which had to respect religious freedom and the identity of the Church, including the freedom to appoint bishops. The harsh responses of Saint John Paul II to Chinese provocations over the appointment of bishops bears witness to this, as does his decision to proceed with the canonizations of the Chinese martyrs on October 1, 2000, despite the harsh objections of Beijing, and also Benedict XVI’s May 27, 2007 Letter to Chinese Catholics, to cite only a few of the most egregious examples.

Cardinal Re then goes on to deny a statement by Cardinal Zen that the agreement signed in September 2018 could be “the same one that Pope Benedict had at the time refused to sign.” The Dean assures his fellow cardinals that he has verified this in the Archive of the Secretariat of State and makes an astounding declaration: “Pope Benedict XVI had approved the draft of the Agreement on the appointment of Bishops in China, which it was only possible to sign in 2018.”

And so, according to Cardinal Re, the secret Agreement also bears the signature of Benedict XVI, a sensational revelation that at this point requires proof: the documents of the Secretariat of State cited by Cardinal Re and the secret agreement of 2018 need to be made public so as to verify such affirmations. If this were shown to be true, one could only deduce that Pope Benedict XVI had reneged on everything he had publicly written, such as for example in his famous already-mentioned May 2007 Letter to Chinese Catholics, whose radical difference to the approach laid out by Re we show in another article. Moreover, Re does not explain why, if Benedict XVI had given his placet to the Agreement, it was not already signed ten years ago.

Immediately after this, there is the passage that is most pregnant with consequences for the universal Church: “The Agreement provides for the intervention of the authority of the Pope in the process of the appointment of Bishops in China. Even starting from this certain fact, the expression independent Church can no longer be interpreted in an absolute manner as “separation” from the Pope, as was the case in the past.” These affirmations leave one speechless: “independent Churches” can be simultaneously in communion with the Pope, a declaration that has implications far beyond the Chinese Church and proposes a new ecclesiology. But this is exactly what Pope Benedict XVI denied in the Letter to Chinese Catholics, declaring the statutes of the Patriotic Association to be “irreconcilable with Catholic doctrine.” And yet, as far as we can tell, the secret Agreement has legitimized them.

Cardinal Re is clearly aware of the implications of these statements, so much so that immediately afterwards he explains that we are at a moment of “epochal change” which gives rise to consequences “both on the doctrinal and practical level.” Thus he explicitly says that doctrinal changes have been enacted in order to arrive at the Agreement with the Chinese government. This is a very serious affirmation, as one can easily guess: it is the exact opposite approach to the one expressed publicly by Saint John Paul II and Benedict XVI.

The rest of the letter goes on to cite the harshest criticisms of the Agreement made by Cardinal Zen, declaring them to be “objections” to the “pastoral guidance of the Holy Father toward “clandestine” Catholics,” making a reference to the fact that the Pope has repeatedly listened to Cardinal Zen’s reasoning and read “his many missives.” Cardinal Zen thus becomes the easy scapegoat for the prolongation of “tensions and painful situations” that divide the Chinese Church despite the efforts of the pope and his collaborators.

In other words, the letter of Cardinal Re – who obviously did not write on his own initiative – is truly a call to his brother cardinals to isolate Cardinal Zen, even to the point of making one think that the elimination of the Bishop emeritus of Hong Kong is part of the secret agreement. But Cardinal Re should explain to us why it is that persecution against Catholics in China has intensified since the agreement was signed while the Holy See has remained completely silent. And he should also explain why the Patriotic Association, now recognized by the Holy See, has never expressed so much as a desire for communion with Rome.