The Vatican “gifts” Hong Kong to the Chinese Regime

The next Archbishop of Hong Kong will be completely pro-China. We are talking about Msgr. Peter Choy, who has already been appointed even though the official announcement has been postponed: first, because of the awareness by the Vatican that this announcement will further fracture the church in Hong Kong, and now also because of the coronavirus crisis. The agreement between the Holy See and China – which remains secret even to this day – thus claims a new victim, the church in Hong Kong. 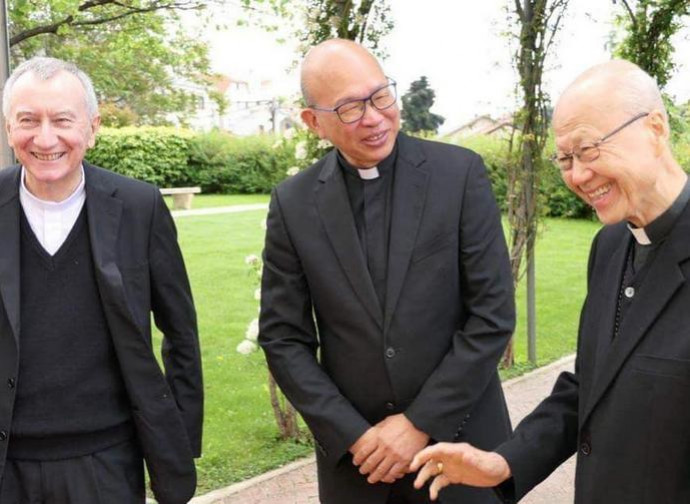 After more than a year of waiting, the new archbishop of Hong Kong is about to be officially appointed, but the Holy See has not announced it yet because the name of the new archbishop will cause arguments and division among the clergy of Hong Kong. We are speaking of Monsignor Peter Choy Wai-man, who is presently the vicar general of the diocese and considered to be very close to the Beijing regime and the positions of the Patriotic Association. The leak, which was already published by Catholic News Agency on January 17, has been confirmed by separate sources in Hong Kong to The Daily Compass.

At first, the official announcement was planned for the next few days, probably right after the publication of the Apostolic Exhortation by Pope Francis on the Amazon, perhaps out of a desire to “hide” the news underneath the numerous discussions that will no doubt accompany the publication of the Exhortation. But now it seems that there will be still further delay because of the coronavirus crisis that has now arrived in the territory of the former British colony.

In any case, the meaning of the appointment is clear, coming as it does in the wake of the still-secret agreement signed between China and the Holy See in September 2018: it indicates the surrender of the Vatican to the Chinese Communist regime and the handing over of the Archdiocese of Hong Kong to the Patriotic Association, which is controlled by the communist party.

The appointment does not come as a surprise. In fact, this is a path that was begun some time ago and that became clear with the sudden death of Archbishop Michael Yeung Ming-cheung in January 2019. His successor should have naturally been the only auxiliary bishop of Hong Kong, Monsignor Joseph Ha Chi-shing, but Rome blocked the appointment.

Bishop Ha, who is a Franciscan, was named the auxiliary bishop of Hong Kong in 2014, along with the already mentioned Monsignor Yeung and Stephen Lee Bun-sang, the present bishop of Macao. But Ha has the huge disadvantage of being considered close to Cardinal Joseph Zen Ke-kiun, who is well known for his very critical attitude towards the Chinese regime and the Sino-Vatican agreement.

Thus it is clear that in the present climate of the submission of the Holy See to the Chinese regime, the figure of Bishop Ha was an embarrassment, so much so that it is certain that Archbishop Yeung had already decided to name Peter Choy as his second auxiliary bishop, but this never happened due to the archbishop’s sudden death. But thanks to the offices of the Croatian priest Msgr. Ante Jozic, the director of the Holy See’s Study Mission to China in Hong Kong (which is in fact a “masked” nunciature), the appointment of a new archbishop as Ordinary was put on stand-by. Instead there came the surprising announcement of the appointment of an apostolic administrator: Cardinal John Tong Hon, who was archbishop of Hong Kong until 2017.

This period of administration by Tong has served to prepare for the succession of a bishop favored by the regime, preventing the appointment of Bishop Ha as Ordinary and ensuring the smooth passage of Chinese Catholics into the hands of Beijing. As a further gesture of kneeling at the feet of Beijing, the Holy See promoted Msgr. Jozic to other assignments, appointing him as nuncio to Ivory Coast last March, thereby clearing out the diplomatic representation of the Holy See in Hong Kong in the hope of soon opening a nunciature in Beijing.

Throughout the time of his oversight as apostolic administrator, Cardinal Tong, who has a direct line to the Vatican Secretary of State Cardinal Pietro Parolin, has been discreetly giving more and more assignments to Msgr. Peter Choy, who is very close to the circles that are pushing to bring all Chinese Catholics into the Patriotic Association and to “dilute” the clergy of Hong Kong with patriotic priests from China.

In the past few months, the protests that erupted in Hong Kong after the local government attempted to pass a law of extradition to China have revealed the rift within the church of Hong Kong more than ever. Many Catholics participated in the demonstrations, and Bishop Ha was very closely involved with the demonstrators. But Msgr. Peter Choy remained totally distanced from what was happening: close to the regime in Beijing and far from the hearts of the people of Hong Kong, the majority of whom prefer Bishop Ha, who has much personal experience and many assignments in the diocese.

But obviously Beijing does not think so, and these days that is the most important thing in the Vatican. So much so that it is overlooking the insistent voices coming from Hong Kong about the alleged moral weaknesses of Msgr. Choy.

The transformation of the Archdiocese of Hong Kong into another outpost of the Chinese National Church has now arrived at its end game. The only thing left is the official announcement of the appointment of Msgr. Peter Choy, coronavirus permitting.