Visitation of the Blessed Virgin Mary

St Francis de Sales extolled Mary’s solicitude towards Elizabeth: “Charity and humility are not perfect unless they pass from God to neighbour. It is not possible to love God whom we do not see, if we do not love the people we see. This part is fulfilled in the Visitation”. 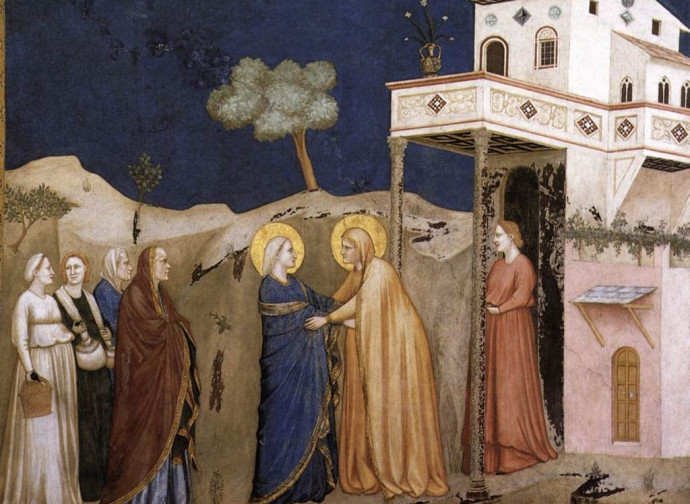 When Mary received the announcement by the angel of Jesus’ virginal conception, she also received the news of Elizabeth’s maternity, an explicit sign of God’s omnipotence. The Blessed Virgin left Nazareth to visit and help her elderly cousin. The evangelist Luke relates that Mary after a journey through the mountains, went “in haste” to a town in Judea, identified since antiquity as Ain Karem, about seven kilometres from Jerusalem (of which today it is a district). In the area of Ain Karem there is a church dedicated to St John the Baptist and another to the Visitation, the latter built on the site where, according to tradition, Zechariah’s family lived. We know that on hearing the Virgin’s greeting, Elizabeth felt the child she was carrying (John the Baptist, who would prepare the way for Jesus) rejoice and, filled with the Holy Spirit, she called Mary “mother of my Lord” (Lk 1:43).

Elizabeth thus proclaimed the truth at the heart of the Incarnation, and therefore of the history of salvation, recognising both the role of the Son carried in Mary’s womb and that of the one whom divine grace had chosen as Mother. Hence her praise of her cousin who had come to visit her, a divinely inspired praise that Christians have been repeating for centuries every time they recite the Hail Mary: “Blessed are you among women, and blessed is the fruit of your womb!”. In the Visitation, the second joyful mystery of the Rosary, Elizabeth thus already recognises Mary as the Mother of the redeemed and a model of faith (“blessed is she who believed in the fulfilment of the Lord’s words”). Both are mothers by grace, the first despite her sterility, the second despite her virginity. The first was called to give birth to the Precursor, the second to the Redeemer.

Luke’s passage also reminds us that all honour to the Virgin reflects the glory of God. After her cousin’s praise, Mary immediately raises her hymn of praise, the Magnificat (rich in references to the Old Testament), in which she exalts the Almighty, declaring herself once again after the Annunciation, His servant. She points out to the faithful God’s mercy and justice and announces a prophecy that concerns her directly and that has been fulfilled for over two thousand years: “From now on all generations will call me blessed”.

The Feast of the Visitation - celebrated in the West as early as the 12th century under the title of Our Lady of Graces - spread particularly thanks to the Franciscans after 1263, when St Bonaventure recommended it at the General Chapter of Pisa. In 1389, Urban VI set the date of the feast on 2 July, asking the Virgin to intercede for the end of the Western Schism. The following year Boniface IX extended it to the whole Church, and his decision was confirmed in 1441 by the Council of Basel, Florence and Ferrara. The choice of 2 of July is based first of all on the account of St Luke, who relates that Mary, having set out after the Annunciation (which took place in the sixth month of her cousin’s pregnancy), stayed with Elizabeth for about three months. The date of 2 July has been chosen on the assumption that Mary stayed for another eight days after the birth of John the Baptist, which was already celebrated by the early Church on 24 June (see also the date of the Nativity), because on the eighth day the circumcision and the naming took place.

That choice favoured the celebration of the end of Mary’s visit, while the 1969 calendar reform set the date at 31 May, the last day of the Marian month par excellence. The celebration on 2 July is however maintained in the extraordinary form of the Roman Rite. We cannot exclude the influence of the Byzantine Church, which, since the 5th century, has celebrated on 2 July the Feast of the Placing of the Maphorion (a mantle used by the Virgin to cover her shoulders and head) in the sanctuary of Blacherne in Constantinople. Several religious orders are dedicated to the mystery of the Visitation, the best known of which is the one founded in 1610 by St Francis de Sales, who extolled Mary’s solicitude towards Elizabeth: “Charity and humility are not perfect unless they pass from God to neighbour. It is not possible to love God whom we do not see, if we do not love the people we see. This part is fulfilled in the Visitation”.