Transfiguration of the Lord

Introducing the Mysteries of Light in the recitation of the Rosary, Saint John Paul II wrote that the Gospel scene of the Transfiguration of Our Lord can be taken as an “icon of Christian contemplation”. 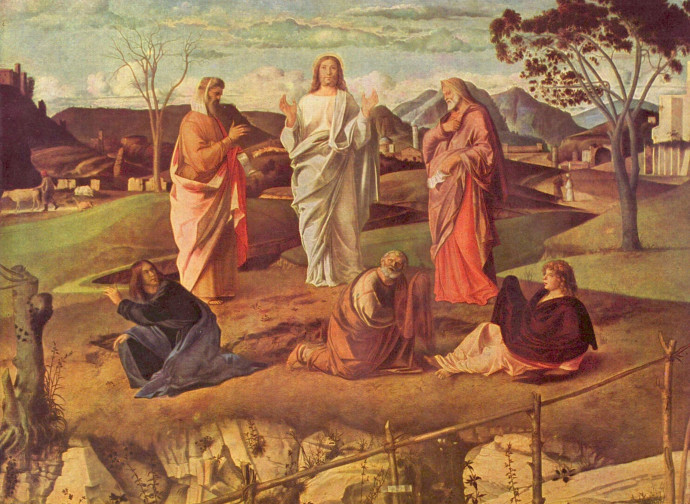 Introducing the Mysteries of Light in the recitation of the Rosary, Saint John Paul II wrote that the Gospel scene of the Transfiguration of Our Lord can be taken as an “icon of Christian contemplation”. And our goal, as it was for the apostles, annihilated and ecstatic before the divine majesty, is “to fix our eyes on the face of Christ”. As witnesses to the ineffable mystery of His glorious Body, Jesus wanted with Him Peter, James and John: His vicar on earth, the first martyr of the Twelve, and the beloved disciple, who is also the one who wrote the book that closes the Holy Bible. Precisely in the epilogue of Revelations, Jesus gives a final definition of Himself by calling Himself “the Bright and Morning star” (Rev 22:16), which waits to shine on those who thirst for Him, in union with His mystical Body, the Church.

On the holy mount (2 Pet 1:18), identified with Tabor, the three apostles had a foretaste of the prize which the redeemed will enjoy eternally: “(...) He was transfigured before them; and His face shone as the sun, and His raiment was white as the light” (Mt 17:2). In conversation with Jesus there are Moses and Elijah, who represent the Law and the Prophets, thus the continuity of God's one saving plan that is revealed between the Old and the New Covenant. As already in the Baptism in the Jordan, another Mystery of Light, also in this epiphany the Father bears witness to the Son who came among men: “This is my Son, the beloved. Listen to him!”. The voice comes from the luminous cloud, symbol of the Holy Spirit, to complete Trinitarian unity. In the face of so much glory the apostles fall face-down on the ground and are gripped by a sacred fear. But they will carry within them that joy that Peter, though still humanly incapable of penetrating that mystery of salvation, had expressed shortly before like this: “It is beautiful for us to remain here”.

The episode of the Transfiguration comes after the solemn Petrine confession (“You are the Christ, the living Son of God”) and the first announcement of the Passion, in which Peter had always protested with Jesus at the idea that He should suffer and be killed. It can be said to be the counterbalance to the Sorrowful Mystery in the Garden of Olives, where the chosen witnesses would again be Peter, James and John. In Gethsemane - instead of the divine light of the Son - the darkness of sin that Jesus, in order to redeem us, would take on His sacred humanity, sweating tears of blood. The most painful prelude to Calvary.

In the days between the first announcement of the Passion and the Transfiguration, Jesus had said: “If anyone wants to come after Me, deny himself, take up his cross and follow me”. In the preface, the liturgy of the Transfiguration reads that Our Lord “made an incomparable light shine to prepare His disciples for the scandal of the cross”. A foreshadowing of future glory, in the end, which passes through the cross, according to the way taught by Jesus, embraced by Mary and then imitated by the apostles. Sure examples to gain Paradise.