The Church raises a wall against non-vaccinated persons

Access to Masses celebrated by the Pope in Slovakia is prohibited to those who are not vaccinated. And in Italy, the bishop’s daily newspaper launches a crusade against those who oppose mandatory vaccination. Fully espousing the pro-vaccination cause and the adoption of the Green pass, the Church of mercy that advocates tearing down all walls,  is building one around the Mass. 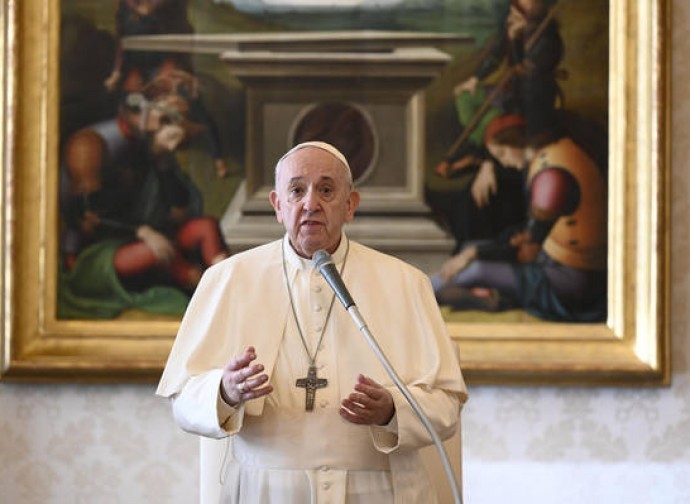 The Green pass party has also found a high profile sponsor: the Catholic Church. In fact, it is easy to imagine the impact the news regarding the pope’s upcoming visit to Hungary and Slovakia in September will have: without the Green pass, no access to the Masses celebrated by the pope. And a sign of great importance is the crusade launched by the newspaper of the Italian Episcopal Conference (CEI), Avvenire, against the alleged "no vax" adherents, which is unprecedented in terms of intensity and ferocity.

In Hungary, the Pope will celebrate the final Mass of the International Eucharistic Congress, and then will be in Slovakia for another three days. The motivation for the compulsory vaccination certificate - said the Archbishop of Bratislava Stanislav Zvolensky - lies in the fact that "it is the only real way not to radically limit the number of participants".

Even though this is having a considerable media impact, the news as such is not surprising: the Vatican was the first state to make vaccination mandatory for residents and employees, the Pope has repeatedly pushed for vaccinations, and recently even accused those who do not accept being vaccinated of endangering the lives of others. Supporting the need for a ‘green pass’  is just one more inevitable piece of the puzzle.

It is Important to note what is happening in Italy as well, also in light of the proximity between the Italian Episcopal Conference and the Holy See. In line with the pope, the newspaper of the CEI  has always had an more than favorable approach to vaccines and vaccinations  but for a few days now we have been reading very harsh attacks against those who do not get vaccinated, and who are treated as a threat to the human race, sorcerers' apprentices or even worse. Knowing the mechanism that moves this clerical-progressive daily newspaper, it is quite easy to surmise that "suggestions" have come from above, from  both the political and ecclesial point of view.

Since it is a common feeling that an important pocket of resistance to compulsory vaccinations lurks among Catholics, it is understandable why the government - given the attitude of the Vatican - wanted to involve the bishops in this work of exercising moral-suasion.

The Catholic hierarchy, therefore, is playing a leading role in promoting compulsory vaccination and segregation through use of the Green Pass. Disregarding the same documents it has produced: just call to mind the note issued by the Congregation for the Doctrine of the Faith last September 19, concerning the morality of the use of anti-Covid vaccines which, referring to “practical reason”,  clearly stated that "vaccination is not - as a rule - a moral obligation" and "therefore must be voluntary”. And also ignoring the Report approved by the Parliamentary Assembly of the Council of Europe, which specifically states that the Green pass cannot be used to discriminate against citizens who rule out being vaccinated.

The step will be very short from here to needing a Green pass to enter church for Sunday Mass.  Some priests in Italy are already doing this, others will certainly follow, and we can expect that the trend will be emulated by bishops. The justification is always that of charity and the common good, taking for granted that mass vaccination will eliminate all contagion. There is no point in proving that this is not the case, that vaccinated persons can easily become infected, and that, precisely for this reason, the gatherings of vaccinated persons become more dangerous for the circulation of the virus. And moreover, if the vaccine is highly effective - as they say - why are vaccinated persons afraid of their unvaccinated peers?

But apart from the substance of the individual aspects of the issue, this position of the ecclesiastical hierarchy is the daughter of a Magisterium that sees only horizontally, focused as it is on the solution of the problems of humanity rather than on the salvation of souls. And so, in the final analysis, it becomes natural for the Church to assume the thinking of the world to the point of transforming itself - as on this occasion - into the handmaiden of the State or the operational arm of the UN.

This is a sad spectacle in itself, but it will obviously have consequences for Catholics who do not bow to the "vaccination for all" and "as quickly as possible" mind frame. In this growing climate of real socialism, the times are also approaching when it will become necessary to hold clandestine liturgies. Of course, a smile is the natural reaction to the ‘parable’ of a Church that begins by wanting to demolish all walls, and preaching acceptance, and ends up building new walls right around the Mass, throwing out those who follow the extraordinary form, non-vaccinated persons, and, pretty soon, those taking a stand against anthropogenic global warming.