Since the revision of the General Roman Calendar of 1969, the Church commemorates on the same day the holy Bishops Timothy and Titus, favourite disciples of Saint Paul and recipients of three 'pastoral' letters, so called because they instruct to the two pastors regarding the duties of those who lead a Christian community. 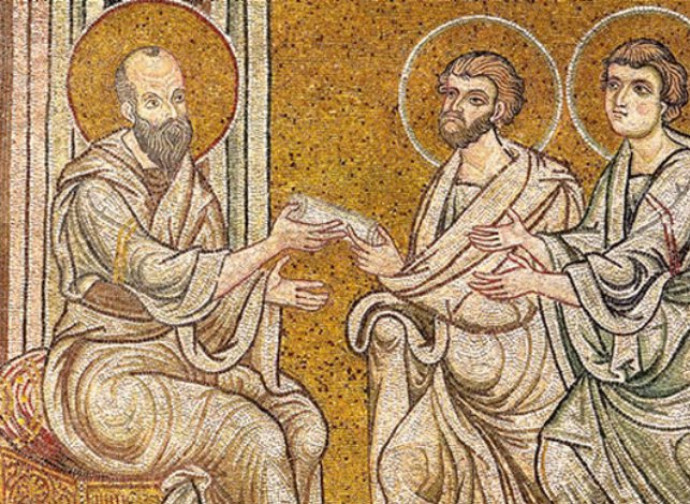 Since the revision of the General Roman Calendar of 1969, the Church commemorates on the same day the holy Bishops Timothy and Titus, favourite disciples of Saint Paul and recipients of three 'pastoral' letters, so called because they instruct to the two pastors regarding the duties of those who lead a Christian community. The two letters to Timothy, as well as in the one to Titus, contain exhortations to defend sound doctrine from false teachers, and express the need to persevere in faith and in good works, until the glorious return of Jesus Christ, who will reward those who have lived by observing his Word.

SAINT TIMOTHY (ca. 17-97). In addition to Paul's letters, Timothy is mentioned six times in the Acts of the Apostles, where his figure is introduced at the beginning of chapter 16, the prologue of Paul's second missionary journey to Derbe and Lystra, "where there was a disciple called Timothy, whose mother was Jewish and had become a believer; but his father was a Greek." It is probable that Timothy was converted during Paul‘s first trip, who had already been to Lystra; on his return, Paul wanted the disciple, highly learned in the Holy Scriptures and whom "the brothers at Lystra and Iconium spoke well of", to leave with him. He circumcised him "out of respect for the Jews who were in those regions", that is, to facilitate the success of their mission, which was also aimed at communicating to the various Christian Jews the decisions taken by the Council of Jerusalem on circumcision, since then explicitly not required of converted pagans (cf. Acts 15: 1-29).

Timothy followed Paul on his travels to Asia Minor and Greece, receiving numerous assignments from his master. He helped Paul evangelise Corinth, was sent to Thessalonica to confirm the nascent local Church in faith, went to Macedonia, again on the mandate of Paul, who later asked him to stay in Ephesus, Anatolia. According to Eusebius' Ecclesiastical History, Timothy was the first bishop of that city. Tradition reports that he was martyred there, subjected to stoning for having publicly condemned the cult of Dionysus. Timothy had therefore fought the good fight to the end and witnessed to Christ by his preaching and works, following Paul's famous exhortation addressed to him: "proclaim the message and, welcome or unwelcome, insist on it. Refute falsehood, correct error, give encouragement – but do all with patience and with care to instruct. The time is sure to come when people will not accept sound teaching [...] But you must keep steady all the time; put up with suffering; do the work of preaching the gospel; fulfil the service asked of you."

SAINT TITUS. Like Timothy, Titus is also called by Paul "true child of mine in the faith that we share." (Tt 1: 4). The commonality of purpose and fraternal friendship between the two is also found in the Second Letter to the Corinthians, in which Paul reports that, on his arrival in Troad, "I had no peace in my spirit because I did not find Titus." He later met him in Macedonia at a time of great distress; there, Titus comforted him with the news about the Christian community of Corinth: "he told us of your desire to see us, how sorry you were and how concerned for us; so that I was all the more joyful."(cf. 2 Cor 7: 5-7). In the same epistle, there is talk of the Corinthians entrusting to Titus a collection destined for the poor.

Titus, a Greek of pagan origin, had previously accompanied Paul to the Council of Jerusalem, where he was not obliged to be circumcised (Gal 2: 1-10), thanks to Paul's defence against the opinion of the Christian Pharisees, and thanks to the speeches of Peter (who in the meantime had witnessed the descent of the Holy Spirit into the house of Cornelius, the converted centurion) and James, a sign that the Church had been enriched by the truth about Baptism as "Christ's circumcision" within the New Covenant. From Paul's letters we know that Titus preached in Dalmatia, where he is still highly revered today. He had already been appointed as Head of the Church of Crete when he received Paul's pastoral letter, warning him of any false teachers and advising him to teach believers the necessity of a life not unrelated to, but entirely consistent with, faith.