"If I could only put into the hearts of all, the fire that is burning in my own breast, and that makes me love the Hearts of Jesus and Mary so very much!" So said Jacinta Marto, the little warrior who went up to Heaven on February 20th, 1920 at almost ten years old, thus joining her brother Francisco, who had died on April 4th, 1919, when he was not yet eleven. 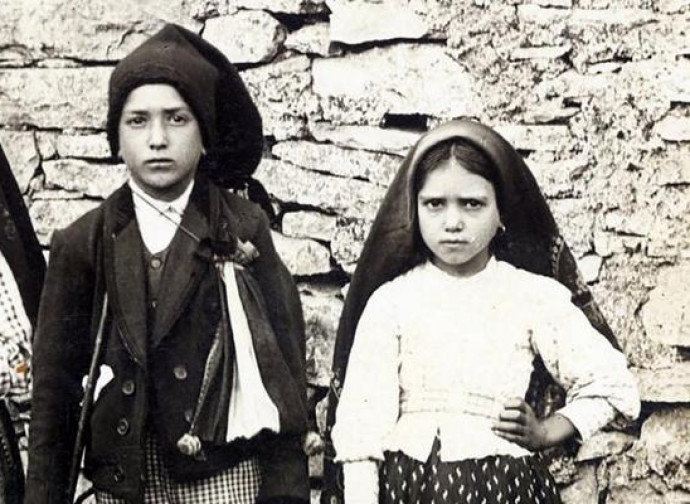 "If I could only put into the hearts of all, the fire that is burning in my own breast, and that makes me love the Hearts of Jesus and Mary so very much!" So said Jacinta Marto, the little warrior who went up to Heaven on February 20th, 1920 at almost ten years old, thus joining her brother Francisco, who had died on April 4th, 1919, when he was not yet eleven. The Church celebrates the memorial of the two little shepherds on February 20th: these are the first non-martyred children to be proclaimed saints. Beside the family bond, they were united, above all, by the heroic virtues by which they accepted the graces that followed the apparitions of Fatima, which they witnessed together with their cousin Lucia (1907-2005). Altogether, on May 13th, 1917, they first saw Our Lady, who asked them: "Do you want to offer yourselves to God in order to bear all the sufferings that He wants to send you, as an act of reparation for the sins by which He is offended and of supplication for the conversion of sinners?" Their answer was: “Yes, we do”.

That first encounter with the Blessed Virgin had been preceded and prepared by the three apparitions in 1916 of the Guardian Angel of Portugal. In the first, the Angel lay prostrated with his forehead to the ground and taught them this prayer: "O my God! I believe, I adore, I hope and I love you. I ask you to forgive those who do not believe, do not adore, do not hope and do not love you". In the second apparition, the Angel exhorted them to offer prayers and sacrifices, because "the most holy Hearts of Jesus and Mary have designs of mercy on you". In the third, he taught them a wondrous prayer to the Holy Trinity – in reparation for the insults, sacrileges and indifference to Jesus the Eucharist and for the conversion of sinners – and he gave Communion to all three of them kneeling: to Lucia he gave the sacred Host, while Francisco and Jacinta drank from the chalice in which some drops of the most precious Blood of Jesus had fallen from the same Host.

The children, therefore, were immediately made aware of the gravity of sin, and at the same time received extraordinary graces. During the apparitions of the Blessed Mother these graces even included seeing themselves reflected in the Holy Trinity, with a light which penetrated "through to our innermost soul, making us see ourselves in God, who was that light, more clearly than we can see ourselves in the best of mirrors".

Therefore the three little shepherds asked the Virgin to take them to Heaven and, as early as June 13th, 1917, she told them when their request would be granted: "I will take Jacinta and Francisco there soon, but you [Lucia] will remain here for some time. Jesus wants to use you to make me known and loved. He wants to establish devotion to my Immaculate Heart in the world. To those who practice it, I promise salvation. These souls will be preferred by God, and like flowers they will be placed by me before His throne". Our Lady referred to the Communion of reparation on the first Saturday of every month, which she would introduce through the revelations to Lucia, who lived as a cloistered nun until she was almost 98 years old, witnessing to both the errors widespread by communism and those of the Second World War; tragedies which, according to the heavenly promises, would have been avoided if only Russia had been consecrated to the Immaculate Heart of Mary and hearts had converted.

Of the three shepherd children, Francisco was the only one who did not hear the Virgin speak; however, he was endowed with a profound spirit of contemplation ("we were blazing in that light which is God but we did not burn! What God is like, we cannot tell!" he said) and an exceptional piety towards the Lord. He had seen the sadness on Our Lady's face when she had asked for sinners to no-longer offend God. On his way to school he often stopped in church to contemplate the tabernacle. "I'll stay here in the church, next to the hidden Jesus. For me it isn't worth learning to read, as I will soon go to Heaven!", he explained to his cousin. He went down with the Spanish flu in December 1918 and happily offered his sufferings for the months before his death by joining them to those of Christ, with his gaze always turned to heavenly benefits. To Lucia, who asked him for prayers from heaven, he answered: "Ask Jacinta. I fear I may forget, when I see Our Lord, first of all I want to console Him ... ". Before his last breath, with an angelic smile on his face, he said to his mother: "Look, mother, what a beautiful light there is, by the door!".

Jacinta, for her part, was the one to be most affected by the vision of Hell and the eternal fate of souls who reject Divine Mercy right to the end. "She often sat – writes Lucia – and thoughtfully began to say: Hell, Hell! How much compassion I have for the souls who go there". The youngest of the little shepherds, "the one to whom the Most Holy Virgin communicated the greatest abundance of graces and the greatest knowledge of God and of virtue", continually invented sacrifices and penances to save some soul. She also had a special love for the Pope (whom the three visionaries had seen persecuted together with the whole Church), and prayed much for him. She would kiss the Crucifix and say: "Jesus, I love you and I want to suffer much for your sake. Now you can convert many sinners, because this sacrifice is very great".

Her ordeal lasted longer than her brother’s, because the attack of  Spanish flu was followed by a purulent pleurisy with the formation of a large gash on her chest, like a wound of Christ. Jacinta died in hospital in Lisbon, away from home and from her loved ones, as the Blessed Mother had predicted would happen. Jacinta always had a chair ready by her bed for Our Lady: "Because it is there that Our Lady sits when she comes to visit me!" Together with Our Lady and with Lucia, who in the meantime has been proclaimed Servant of God, Jacinta and Francisco shine in eternal glory and can repeat the words of their beloved Jesus: "I bless you, Father, Lord of Heaven and of earth, for hiding these things from the learned and the clever and revealing them to little children" (Mt 11, 25).