Among the first holy Roman martyrs, Basilissa and Anastasia were disciples of Peter and Paul at the time of Emperor Nero. After the martyrdom of the two holy apostles they piously took care of the burial of their bodies. 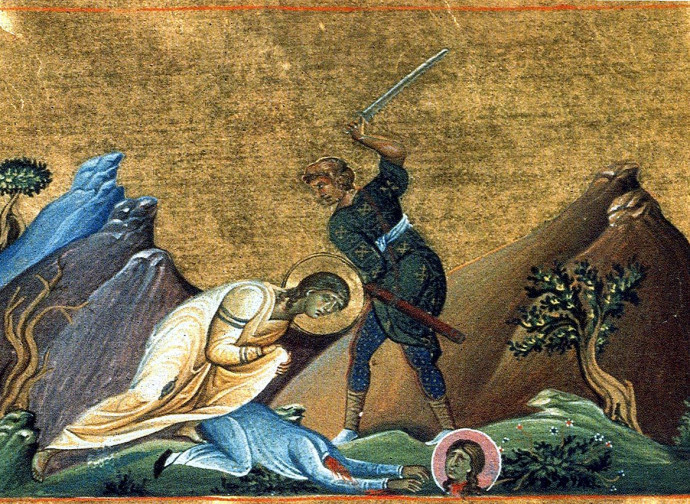 Among the first holy Roman martyrs, Basilissa and Anastasia were disciples of Peter and Paul at the time of Emperor Nero. After the martyrdom of the two holy apostles they piously took care of the burial of their bodies.

According to tradition it was the apostles themselves who baptized the two women. Basilissa and Anastasia certainly matured a great faith and charity, and were blessed with the virtue of fortitude, thanks to which they remained firm in Christ even when put to the test. In 64 the Great Fire of Rome took place and on that occasion Nero unjustly blamed the Christians, initiating the first massive wave of persecutions in the capital of the empire. It was at that historical juncture that the upside down crucifixion of Peter and the beheading of Paul took place, martyred a few kilometres from each other and on the same day (29 June 67, as a consolidated tradition reports).

The Prince of the Apostles was buried in a Christian property not far from Nero's Circus, where St Peter's Basilica stands today. The body of the Apostle of the Gentiles was buried along the Via Ostiense, where the Basilica of St Paul Outside the Walls was built. The location of the two tombs, which soon became pilgrimage sites, was well known to the Christian community of Rome, as attested by the testimony of Gaius, a priest who lived at the time of Saint Zephyrinus (Pope from 199 to 217), who wrote: “If you go to the Vatican or along the Via Ostiense, you will find the trophies of the founders of the Church”. Only in the second half of the 3rd century, due to the worsening of the persecutions, were the two corpses temporarily transferred ad Catacumbas, that is, to the present Catacombs of St. Sebastian.

Basilissa and Anastasia, for having given their precious contribution to the burial of the two apostles, were probably even more exposed to persecution. It is a fact that they were captured. Their tormentors tried to make them recant their faith, subjecting them to various tortures, from scourging to cutting off their tongues. But the two saints continued to profess their faith in Christ until, in 68, they were beheaded by order of Nero. The traditional date of their remembrance is April 15, but the last editions of the Roman Martyrology have aggregated the two saints to the group of “Roman Protomartyrs”, with general remembrance on June 30. According to the Roman Diary of 1926, their relics are kept in the church of Santa Maria della Pace.