When these two Salesians in love with Christ first met in 1921, Monsignor Aloysius Versiglia (1873-1930) was passing through Turin. He already had a 15-years' mission in China behind him, while Callistus Caravario (1903-1930) was an 18-year old burning with the desire to become a priest and devote himself to the missionary life. 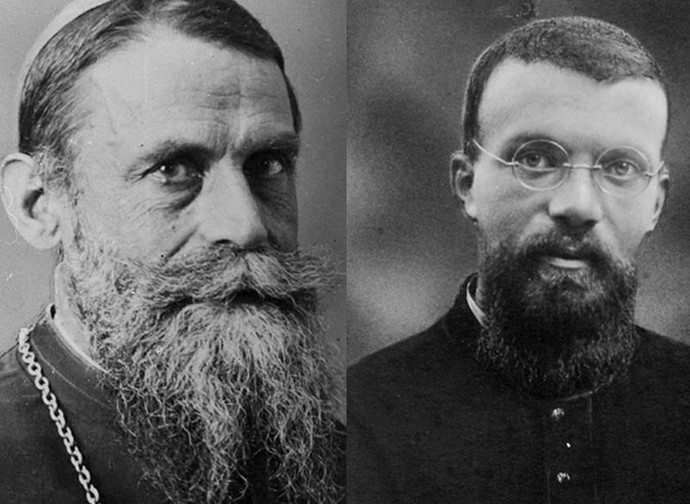 When these two Salesians in love with Christ first met in 1921, Monsignor Aloysius Versiglia (1873-1930) was passing through Turin. He already had a 15-years' mission in China behind him, while Callistus Caravario (1903-1930) was an 18-year old burning with the desire to become a priest and devote himself to the missionary life: "I will soon join you in China. Together we shall announce the light of Christ", said Callistus on that occasion. Both were closely linked to the charism of Saint John Bosco.

Monsignor Versiglia, who at 12 years of age had been sent to study at the Salesians' in Turin, actually had the grace to meet Don Bosco, who once said to him: "Come and visit me, I have something to tell you". There was no opportunity to do that, because that champion of charity would die shortly afterwards, but the adolescent Aloysius was struck by those words; soon his vocation to priesthood came to fruition, and he was ordained in 1895. He left for China in 1906 and settled in Macau, where he founded the Salesian mother house, the basis for evangelisation and assistance to the poor. In the city they called him the "father of orphans". He then extended his apostolate to the neighbouring region of Guangdong, particularly Shaoguan, of which he became the first bishop in 1920. In the new diocese, the Saint founded a seminary, an orphanage, a home for the elderly and several schools, and multiplied his efforts for the teaching of Catechism. 3,000 people received Baptism, and a number of vocations arose.

Saint Aloysius Versiglia managed to do all this at a very difficult time for China, where on January 1st, 1912 the Republic had been proclaimed, thus ending the imperial era. The instability of the newly-formed republic worsened with the infiltrations of Soviet communists, who in 1927 were outlawed by General Chiang Kai-shek, an act that marked the beginning of a long civil war. In that climate, life for foreigners, especially for Christian missionaries, was not easy at all, as they were exposed to both the violence of brigands and the hatred of the communist ideology. Thus, when a priest friend from Italy delivered the chalice used by Fr Paolo Albera (1845-1921) to celebrate his 50 years of priesthood, Versiglia remembered a vision revealed by Don Bosco to the Salesians in 1885: "Don Bosco saw that when a chalice was filled with blood in China, the Salesian Mission by grace would spread throughout this immense people. You bring me the chalice seen by the father: it is up to me to fill it with blood in order to fulfil his vision".

A similar awareness inspired Saint Callistus Caravario, who kept his promise by embarking for China around the age of 20. There he was ordained a priest by Versiglia himself in 1929. In one of his moving letters to his mother, the young man wrote: "By now your Callistus is no longer yours, he must be completely of the Lord's, completely dedicated to his service! [...] Will my priesthood be short or long? I don't know, the important thing is that I do well and that by presenting myself to the Lord I can say that I have, with His help, fulfilled the graces he has given me".

The moment to witness Christ through extreme sacrifice came in February 1930, when Versiglia decided to visit the small Christian community of Lin Chow, in an area devastated by the civil war: "If we wait for the roads to be safe, we won't ever start". The bishop left together with Don Callisto, two teachers with their young sisters and a 22-year-old catechist. After the first stretch by train, an elderly catechist and a child joined the group; the journey continued by boat, which was stopped on February 25th by a dozen armed men. Since the missionaries did not have the $ 500 demanded by the pirates, the latter decided to kidnap the three young women, whom the two Saints tried to protect: "Take us, but we beg you to spare these girls." After being beaten, they were taken to a wood, where one of the bandits said: "The Catholic Church must be destroyed."

Monsignor Aloysius and Fr Callistus, now tied up, began to pray aloud, interrupted only by the rifle shots that ended their earthly life. The three girls were forced to go with the criminals, but they were released by the army five days later and witnessed to the fortitude of the two Salesians before martyrdom. A fortitude that struck their executioners, so much so that one said: "It is inexplicable, we have seen so many... all fear death. Instead, these two died happily". They did, as if risen.