He should not be confused with the homonymous father of John the Baptist. Saint Zechariah is the penultimate of the Old Testament prophets and, after Isaiah, the most quoted in the New Testament. 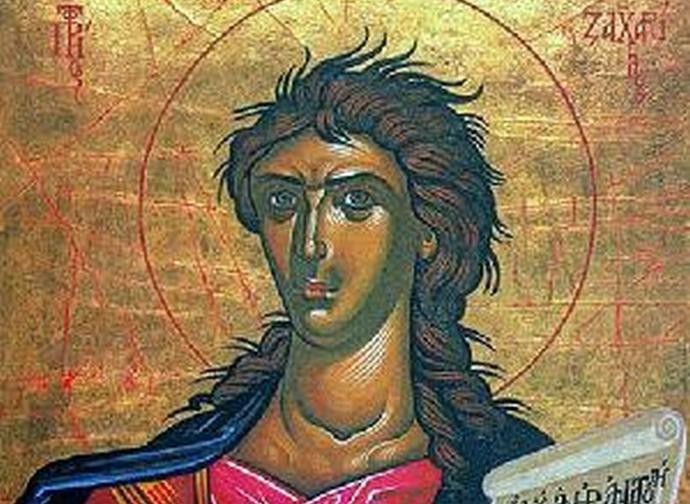 He should not be confused with the homonymous father of John the Baptist. Saint Zechariah is the penultimate of the Old Testament prophets and, after Isaiah, the most quoted in the New Testament. His prophetic mission, as well as that of his contemporary Haggai, next to whom he was probably buried, began in 520 B.C., that is “in the second year of Darius” (Zc 1, 1), the famous king of Persia.

His ministry therefore took place after the end of the Babylonian exile (597-538 B.C.), during the years of the reconstruction of the temple, which occupied a prominent place in his exhortations to the people and even more so in those of Haggai. The temple is the centre of irradiation of salvation, which will extend beyond the borders of Israel to “numerous peoples and powerful nations” that will seek and plead with the Lord, while severe warnings are addressed to those who fight Him.

Among the visions and oracles of Zechariah there are several Messianic passages, such as the proclamation of the Rod “And there shall come forth a Rod out of the stem of Jesse, and a Branch shall grow out of his roots” (Is 11,1-2) (a prefiguration of Jesus Christ, of Davidic lineage according to the flesh) who “will rebuild the temple of the Lord” (specifically his resurrected Body, as the beloved disciple explains in Jn 2:18-22) and “receive glory”. The salvation that will be accomplished thanks to the Messiah is then exalted in the famous passage recalled in the Gospels and concerning Jesus' triumphal entry into Jerusalem, prelude to his holy Passion: “Rejoice greatly, O daughter of Zion! Shout, O daughter of Jerusalem! Behold, thy King cometh unto thee! He is just and having salvation, lowly, and riding upon an ass and upon a colt, the foal of an ass” (Zc 9, 9). Here the promises for the faithful who love him reach their peak (“like gems of a diadem they will shine on his earth”), and the grace that will be given to those who feed on the Eucharist is foretold: “The wheat will give strength to the young and the new wine to the maidens”.

Divine outrage follows towards the false shepherds and also towards those sheep who “hated me”, even though He had guided them with mercy. There is also the reference to the thirty pieces of silver with which “the sheep merchants” valued the word of God (Zc 11, 12-13), the same price as Judas' betrayal. The last chapters are full of prophecies about Israel, culminating in an announcement of conversion to Christ (“they will look to me, he whom they have pierced. They will mourn him as they mourn an only child, they will mourn him as they mourn the firstborn”) and apocalyptic images, with the theme of the Day of Judgment (when “the Mount of Olives will split in two”) and the establishment of the kingdom of Heaven: “Then will come the Lord, my God, and with him all his saints”.