When John Paul II proclaimed Saint Thomas More (1478-1535) patron saint of statesmen and politicians, he praised “his passion for the truth”. Pope Wojtyla recalled that the message of the English statesman, martyred under Henry VIII for having defended the freedom of the Church from the self-proclaimed religious supremacy of the king, “speaks to men of all times of the inalienable dignity of conscience”. 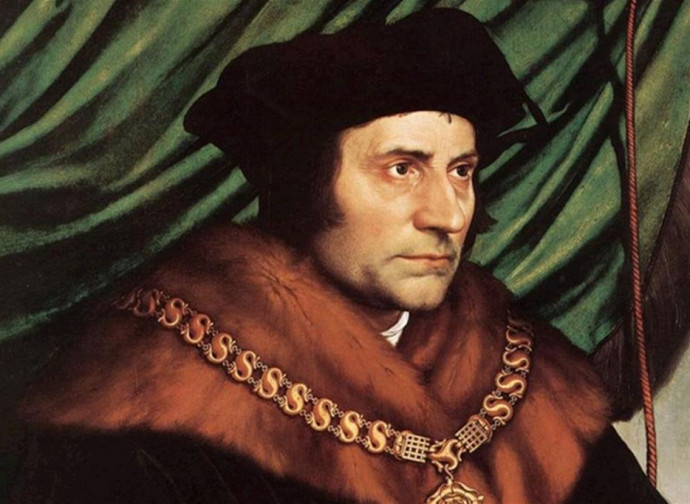 When John Paul II proclaimed Saint Thomas More (1478-1535) patron saint of statesmen and politicians, he praised “his passion for the truth”. Pope Wojtyla recalled that the message of the English statesman, martyred under Henry VIII for having defended the freedom of the Church from the self-proclaimed religious supremacy of the king, “speaks to men of all times of the inalienable dignity of conscience”. That is, More had understood, as the Polish Pope wrote in his apostolic letter dedicated to the saint, that “man cannot be separated from God, nor politics from morality”.

The famous author of Utopia was born in London and grew up cultivating a wide range of cultural interests, from Greek to law, from classical literature to theology. He made friends with one of the greatest humanists of the time, Erasmus of Rotterdam, who dedicated his In Praise of Folly to him. But then relations between the two cooled, because of their differences regarding faith. Erasmus was often critical of what he considered to be errors of Catholicism (for example the monastic life, which he abandoned), while More was firmly committed to defending the doctrine and teachings of the Church on how to achieve Christian perfection. After staying for some time in the Charterhouse of London, the saint understood that his vocation was marriage. He married Joan Colt, with whom he had four children (he became a widower and decided to remarry, adopting two young girls), but he continued to live like a monk. He read the Holy Scriptures before meals, prayed with his family, fasted, wore a cilice, and went to Mass every day.

His intense spirituality and love for Christ were accompanied by works of charity, such as the foundation of a House of Providence, where sick children and the elderly were welcomed. Elected for the first time in Parliament in 1504, More began a brilliant political career, distinguishing himself for his work skills and moral integrity. In the following years he became an advisor to Henry VIII. In this role, in response to Luther's heresies, he contributed to the writing of a treatise in defence of the seven Sacraments, which was published in 1521 and earned the sovereign the epithet “Defender of the Faith” (later annulled by Paul III as a result of the Anglican Schism). Eight years later Henry VIII appointed him Lord Chancellor. Knowing that the spread of Lutheranism posed a threat to the unity of Christians and society as a whole, he ordered the surveillance of those suspected of being Protestants, especially the publishers.  He ordered the arrest of those who owned and traded books with Luther's ideas, which More had undertaken to refute, including defending the truth of Purgatory, the cult of saints and of Our Lady, pilgrimages and other religious practices despised by the heresiarch.

At a certain point Henry VIII, who demanded the annulment of his marriage to Catherine of Aragon in order to marry Anne Boleyn, also came into conflict with the Church. Then More did not hesitate to resign from his position as Lord Chancellor, which he voluntarily renounced in 1532. He had already understood that for his Christian conscience he could not continue to serve a king whose moral conduct was scandalous. Two years later the new Act of Succession (and then the Act of Supremacy) was approved, which following his 'marriage' to Anne Boleyn (never endorsed by the Pope) recognized as 'bastard' the daughter Henry had had from his wife Catherine (Princess Mary): More was called to take an oath to the new law, but he refused. On 13 April 1534 he was therefore imprisoned in the Tower of London, charged with high treason. The Bishop of Rochester, John Fisher, was arrested with him.

After almost 15 months in prison, during which he meditated at length on the Passion of Jesus and wrote A Dialogue of Comfort against Tribulation, More was led to the scaffold on 6 July 1535. Here he spoke words of forgiveness for those who had condemned him, promising prayers for their eternal salvation. He showed his good humour to the last, joking with the executioner who beheaded him. The day before, in his last letter to his daughter, he had written, “I would like to go to Heaven tomorrow, on a day so auspicious for me!” His head was displayed on London Bridge for a month. It replaced that of John Fisher, who had been beheaded two weeks before More, on 22 June, the date on which the Church commemorates both martyrs, beatified in 1886 and canonized in 1935. The head of Thomas More was recovered, against payment to the man who was supposed to throw it into the river, by his daughter Margaret Roper (“Meg”, in many letters), who together with Margaret Giggs Clement, the saint's adopted daughter, was among the people closest to him throughout his imprisonment.