Saint Thomas Aquinas (1225-1274), the Doctor Angelicus, as his contemporaries called him, is the highest example of the trust that medieval Scholasticism placed in human reason; like faith, reason is a gift of God, so one cannot contradict the other. 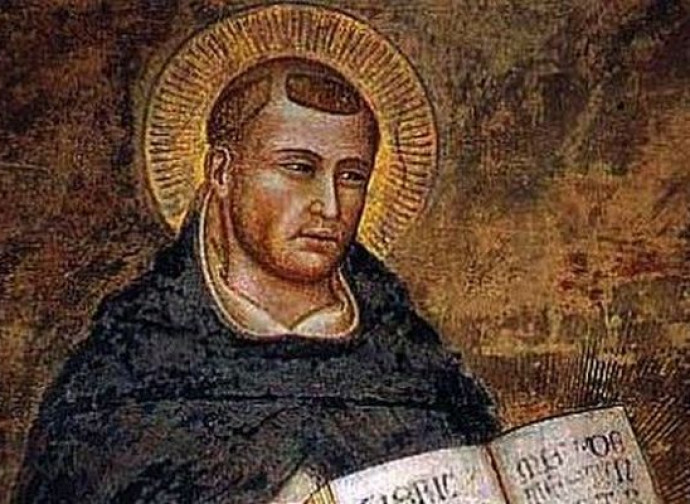 "Although the truth of the Christian faith exceeds the capacity of reason, nevertheless the natural principles of reason cannot be in contrast with this truth", taught Saint Thomas Aquinas (1225-1274), the Doctor Angelicus, as his contemporaries called him, the highest example of the trust that medieval Scholasticism placed in human reason; like faith, reason is a gift of God, so one cannot contradict the other. Aquinas' vast philosophical and theological work contains much of the foundations of the Catholic faith; after Saint Augustine, in fact, he is the most quoted ecclesiastical writer in the Catechism. In 1567 Thomas Aquinas was proclaimed Doctor of the Church by Saint Pius V, who instituted the teaching of his Summa Theologiae in universities; Vatican II also recommended the study of his thought in two documents, one of which is about the formation of priests, called to investigate the mysteries of salvation "having Saint Thomas as their teacher".

Thomas was born in today's territory of Roccasecca (Lazio) to the counts of Aquino. At five years old he was sent to the abbey of Montecassino, where he was educated for some time before being transferred to Naples because of some problems that monastery was having [as a result of the conflict between the Empire and the Papacy]. In Naples university Thomas came to know the Dominicans, who greatly impressed him. Thus he entered the new mendicant order and in 1244 took the habit, causing the disapproval of some of his relatives, who segregated him in the family castle. But Thomas, firm in his will, managed to get free (there are different versions as to how) to follow his chosen path.

A turning point in his formation was his time in Cologne, where in 1248 the Dominicans had created a theological faculty under the guidance of Albertus Magnus. The young Thomas assimilated the teachings of his master (who prophesised his future achievements), focused on the harmony between science and faith. He began an in-depth study of Aristotle's thought, opposed by some because of its Averroist interpretation. Over the years, thanks to a  confrère who helped him translate the texts from Greek, Thomas became Aristotle's greatest commentator, distinguishing between what was contrary to reason and what the ancient philosopher had taught correctly. From the harmony between true philosophy and faith, Thomas perceived that "philosophy worked out without the knowledge of Christ was awaiting, as it were, the light of Jesus to be complete", as Benedict XVI explained in a catechesis on the Saint.

At just 27 years old, on Albertus' advice, Thomas was chosen as a regent master at the University of Paris, where he started teaching and met Raymond of Penyafort, former Master General of the Dominicans, who invited him to write a theological work to help missionaries, known today as Summa contra Gentiles. Thomas completed it in 1264, that is, five years after his first return to Italy, when he received another important assignment: Urban IV asked him to compose the liturgy for the solemnity of Corpus Domini, established throughout the Church following the Eucharistic miracle of Bolsena. Thus were born some splendid Eucharistic hymns still sung today, including the famous Pange lingua and Adoro Te devote. Even today the wooden crucifix is ​​preserved before which Thomas used to prostrate himself and that, according to tradition, once spoke to him: "Thomas, you wrote well about me. What reward do you want? ” And he replied, "Nothing but you, Lord."

In 1265 he began writing the Summa Theologiae, a monumental treatise on theology, metaphysics and morality, in which Thomas – starting from the Holy Scripture, the Church Fathers and the works of other ancient authors – dwells on God, the mystery of the Trinity, the angelic hierarchy, creation, sin and evil, the need to observe the natural law as an emanation of the eternal Law, the relationship between human nature and Grace, and many other issues dealt with deductively. Eight years later he stopped working on it, leaving the third part unfinished. The sudden decision came after the Mass he celebrated on December 6, 1273. Some days later he confided to Reginald of Piperno, his friend and confessor, why he had abandoned writing: “I can no longer do it. Everything I have written looks to me like straw compared to what I have seen".

Three months after that Mass, Thomas returned to the house of the One who had revealed Himself to him. The depth of his theology cannot be explained without the love he felt for God, nourished before the tabernacle and in prayer. He wrote: " Grant me a mind to know you, wisdom to find you, conduct pleasing to you, faithful perseverance in waiting for you, and a hope of finally embracing you. Amen".