Generous with the poor and aware of the immense value of the Mass, the Englishman Saint Richard of Chichester (1197-1253) defended the Church from the king's interference and promoted a robust reform of the clergy in his diocese. 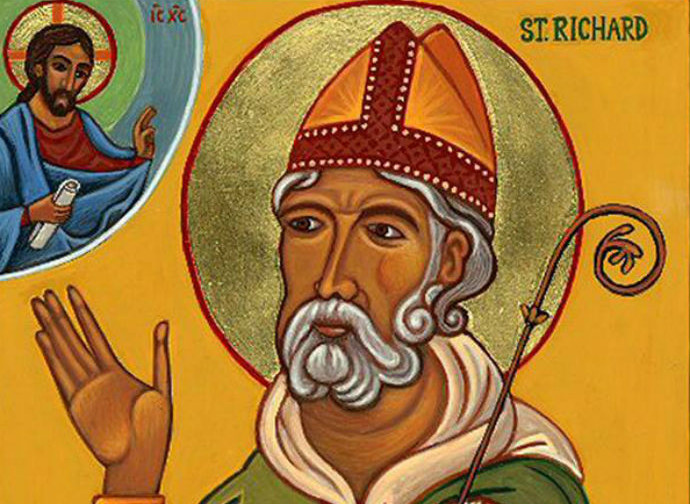 Generous with the poor and aware of the immense value of the Mass, the Englishman Saint Richard of Chichester (1197-1253) defended the Church from the king's interference and promoted a robust reform of the clergy in his diocese. From his early youth he learned to toil. He was soon orphaned of both his parents and had to work hard on his farm with his brother. His friends tried to arrange his marriage to a noblewoman, but he declined the proposal. He studied and taught at Oxford, where he had St. Edmund of Abingdon as his tutor. He then lived in Paris and Bologna, where he distinguished himself for his expertise in canon law; in Italy he also refused a second marriage proposal.

He returned to England in 1235. Two years later Edmund, who in the meantime had become Archbishop of Canterbury, summoned him to his side as Chancellor. Richard then followed him into French exile; and from him, who died in 1240, he inherited a chalice destined to become his symbol and to give a new direction to his life. He decided to become a priest, studied theology with the Dominicans in Orleans and was ordained at the age of 45. He returned home again, acting for some time as parish priest. Blessed Boniface of Savoy appointed him bishop of Chichester, against the favourite candidate of King Henry III, considered ignorant in theology.

Irritated, the sovereign confiscated all the goods of Richard’s episcopal see for about two years. Richard was not discouraged; he received hospitality from a friendly priest and visited the entire diocese on foot. Henry III returned the properties to the Church only after the threat of excommunication by Innocent IV. Once the difficult situation was resolved, Richard was able to devote himself to the reform of the clergy: he produced rules to ensure respect for celibacy, urged priests to wear the cassock and to take the utmost care of liturgical objects necessary for the celebration of the Eucharist, recommending the use of silver or gold chalices. One day he happened to drop the already consecrated chalice, but miraculously not a drop of the Blood of Christ was spilled.

He preached the need for a new crusade to free the Holy Land and allow safe pilgrimages. He lived in strict asceticism, eating frugally and wearing a hair shirt. His compassion for the needy was well-known and he worked tirelessly during the famine of 1247. Considered a living saint, he was canonised just nine years after his death. The pilgrimages to his tomb in Chichester, considered a source of miracles, became as popular as those to the tomb of St. Thomas Becket, until King Henry VIII, responsible for the Anglican Schism, ordered the destruction of Richard's reliquary in 1538. This prayer is attributed to the saint: “Thank You, my Lord Jesus Christ, for all the benefits you have given me, for all the suffering and insults you have endured for me. O most merciful Redeemer, friend and brother, may I know You more clearly, love You with all my heart, follow You more closely”.