The Spanish mystic Saint Paschal Baylón (1540-1592) was called the “Seraph of the Eucharist” because of the angelic devotion with which he approached and spoke of the real presence of Christ in the consecrated Host. 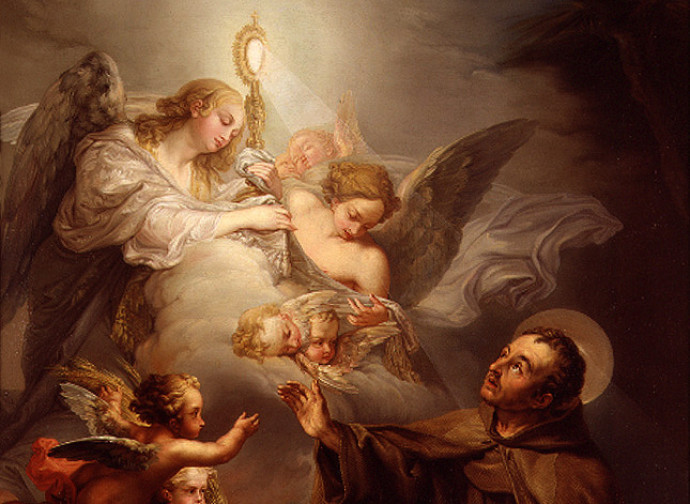 The Spanish mystic Saint Paschal Baylón (1540-1592) was called the “Seraph of the Eucharist” because of the angelic devotion with which he approached and spoke of the real presence of Christ in the consecrated Host. For this reason, in 1897, Leo XIII proclaimed him patron of Eucharistic works and congresses.

The ‘clues’ of his holiness and charism can be found in the crucial moments of his earthly life, right from the day of his birth to the day of his death. Paschal was born in Torrehermosa on 16 May 1540, the day of Pentecost, in Spanish Pascua de Pentecostés, hence his name. From the age of seven to twenty, he worked as a shepherd in a nearby village for a wealthy gentleman named Martín García, who became so fond of the humble boy that he proposed to adopt him to make him his heir: Paschal declined the proposal because he wanted to become a monk.

Paschal continued to work as a shepherd in Monforte del Cid. Here, a few years earlier, a small alabaster statue of Our Lady had been found and a convent of Alcantarine Franciscans had been built, dedicated to Our Lady of Loreto (a title that later evolved into Orito). It was there that Paschal, while he was grazing sheep, saw Jesus appear in the Blessed Sacrament, and a few years after his death a small chapel was built (the Ermita de la Aparición, still a pilgrimage destination today) to commemorate the Eucharistic miracle. On 2 February 1564 the young man began his novitiate among the Alcantarines, born of the reform by the Franciscan St. Peter of Alcantara. He professed his vows as a lay brother and never wanted to ascend to the priesthood, because he did not consider himself worthy of it. In the various convents in which he lived he devoted himself to lowly tasks, including working for years as a cook and porter.

God adorned him with the gift of infused knowledge. Paschal had learned to read and write as a child, but he was not particularly well educated. Yet his advice was requested by important people of the time and he was unsurpassed when he spoke or wrote about the Eucharist. The Blessed Sacrament was the heart of his whole life, at a time when the true doctrine on the transubstantiation of bread and wine into the Body and Blood of Christ was threatened by the spread of Protestantism. In 1576 he was commissioned to deliver an urgent letter to the Father General of the Alcantarines, who was in Paris. The trip was full of pitfalls because several French provinces were controlled by the Calvinists, from whom Paschal received insults and beatings. In Orleans he even risked his life because the heretics, failing to respond to the saint’s inspired arguments about the Eucharist, pelted him with stones.

On his return from the mission he wrote out his Eucharistic knowledge in a pamphlet, recalling also the divine will on the primacy of the pope as successor of Peter, also denied by the Protestants. After a life of prayer and penance, enlightened by love for God, he died on 17 May 1592, the day after his 52nd birthday. This time too, as on his birth, it was the day of Pentecost.

Tradition reports that during his Requiem Mass, at the act of consecration, his eyes opened to adore the Blessed Sacrament. As a result of Spanish domination, the cult of the saint spread widely in the Kingdom of Naples. And the name Pasquale, already present in the first Christian millennium (also in the variant Pascasio), gradually became very popular.