Saint Pantaenus († c. 200), an important apologist and missionary of the 2nd  century, originally from Sicily, was trained in the school of the Stoic philosophers and as an adult had experienced a radical conversion to Christianity. 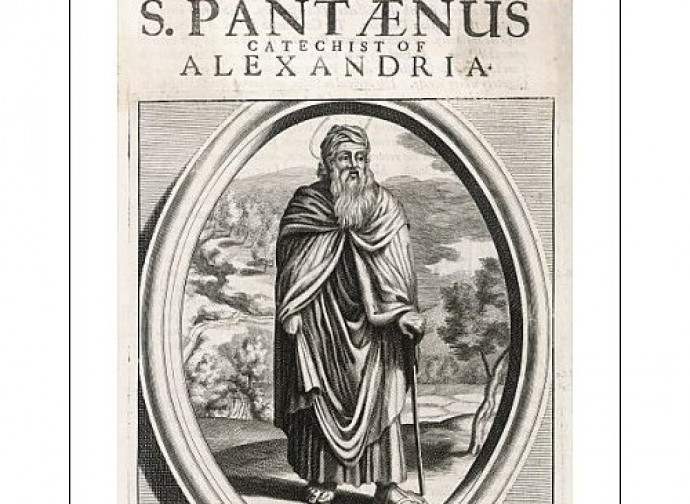 Saint Pantaenus († c. 200), an important apologist and missionary of the 2nd  century, originally from Sicily, was trained in the school of the Stoic philosophers and as an adult had experienced a radical conversion to Christianity. Eusebius of Caesarea (c. 265-340), in his Church History, called him “a man most renowned for his culture” and a few decades later Saint Jerome (347-420) included his name, with his mini biography, in De Viris Illustribus.

He carried out a significant part of his apostolate in Alexandria. Here, thanks to his biblical erudition and zeal for God, he became the leader of the famous Alexandrian catechetical school, known as Didaskaleion, whose foundation may date back to the time of St. Mark the Evangelist. Pantaenus was the teacher of St. Alexander of Jerusalem and Clement Alexandrian, who called him “Sicilian bee” and wrote that he found peace in his teachings. Directly or indirectly he was also teacher of Origen (185-254), who in one work praised his great philosophical and theological erudition.

Saint Demetrius, bishop of Alexandria for a long period (189-231), admiring his ardour for the divine word, sent him to India. Here Pantaenus, according to Eusebius and Jerome, noted the existence of a Christian community already evangelized by St. Bartholomew. The apostle had taken with him a manuscript with the Gospel of Matthew in Hebrew, still intact at the time of the mission of the Sicilian saint, who took it with him on his return to Alexandria.

Only Matthew’s version in Greek has reached us, but this fact confirms that there was an original Aramaic version of the first Gospel, already attested by the Fathers of the Church such as Saint Papias of Hierapolis (c. 70-130) and Saint Irenaeus of Lyons (c. 130-202). The latter wrote around 180: “Matthew published among the Jews a written draft of the Gospel in their own language, while Peter and Paul in Rome evangelized and founded the Church”.