Saint Margaret Ward (c. 1550 - 1588), called “the pearl of Tyburn”, held the Catholic faith as her most precious treasure. She suffered martyrdom during the persecutions of Elizabeth I Tudor, daughter of the schismatic Henry VIII 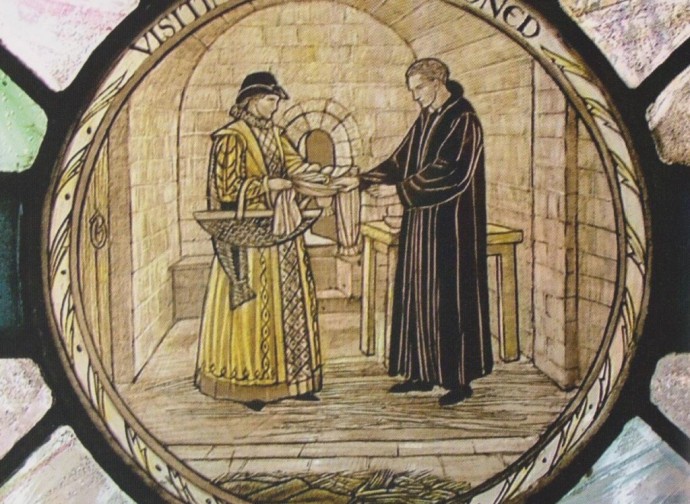 Saint Margaret Ward (c. 1550 - 1588), called “the pearl of Tyburn”, held the Catholic faith as her most precious treasure. She suffered martyrdom during the persecutions of Elizabeth I Tudor, daughter of the schismatic Henry VIII. She is part of the group of the “Forty Holy Martyrs of England and Wales”, religious and lay people, men and women of different social backgrounds who loved Christ more than their lives and went to Heaven at different dates and times (between 1535 and 1679, starting with the protomartyrs under Henry VIII): Paul VI canonised them all together on 25 October 1970. It should be added that this group of martyrs is only a small number of the saints and blessed killed in odium fidei following the Anglican Schism.

Margaret was born in Congleton into a distinguished English family. As a married woman she lived in London in the service of a lady of the high nobility, as her companion. She learned of the harsh mistreatment of Father Richard Watson, imprisoned in Bridewell prison, near the Thames. Exhausted by torture, the priest had at a certain point yielded and accepted to participate in a Protestant function to obtain his release. But then he regretted it, once again professing the Catholic faith and was sent back to prison. Margaret went several times to visit Father Watson to bring him comfort. One day she hid a rope inside a basket and gave it to the prisoner. During his hasty escape, Father Watson was injured and left the rope hanging out of the window. Meanwhile, the boatman with whom Margaret had made an arrangement refused to transport the fugitive.

In anguish the woman managed to find another boatman, the Irishman blessed John Roche, who swapped clothes with the priest and ended up being captured in his place. Margaret was arrested while trying to move out of her accommodation. She was interrogated under torture. She was chained, suspended in the air with her wrists tied, and scourged, but she never revealed Father Watson's refuge. Eight days later the trial was held, during which she said she could not repent for “having freed that innocent lamb from the hands of those bloodthirsty wolves”. She was offered the chance to save herself on the condition that she agreed to take part in an Anglican function and ask the Queen for mercy: she replied that her conscience did not allow her to act against her faith and added that if it were possible she would give not one, but many lives, rather than deny God and the holy Catholic creed.

On 30th August 1588, Margaret was led to the Tyburn gallows, near what is now Marble Arch, and hanged. On the same day the English Richard Leigh (a priest), Edward Shelley and Richard Martin, the Welshman Richard Lloyd, and the already mentioned John Roche, the first condemned because of his priestly ministry and all the others for helping priests, suffered martyrdom.

Margaret and her five companions of martyrdom belong to different groups of martyrs, but the words pronounced by Paul VI in his homily for the already mentioned canonization of 25 October 1970 can be applied to all of them: “Faced with the choice to remain firm in their faith and therefore to die for it, that is to say to have saved their lives by denying the former, they, without a moment's hesitation and with a truly supernatural force, sided with God and joyfully faced martyrdom. But so great was their spirit, so noble were their feelings, so Christian was the inspiration of their existence, that many of them died praying for their beloved homeland, for the King or the Queen, and even for those who had been directly responsible for their capture, for their torments [...]. The Church and the world today have great need of such men and women, of every condition and state of life, priests, religious and lay people, because only people of such stature and holiness will be able to change our tormented world and to give it, together with peace, that spiritual and truly Christian orientation which every man intimately yearns for”.