Saint Ludger (c. 742-809) was still a child when, in 753, he encountered the great evangelizer of Germany, St. Boniface, who was martyred on 5 June of the following year in Dokkum, Friesland, together with 52 companions. 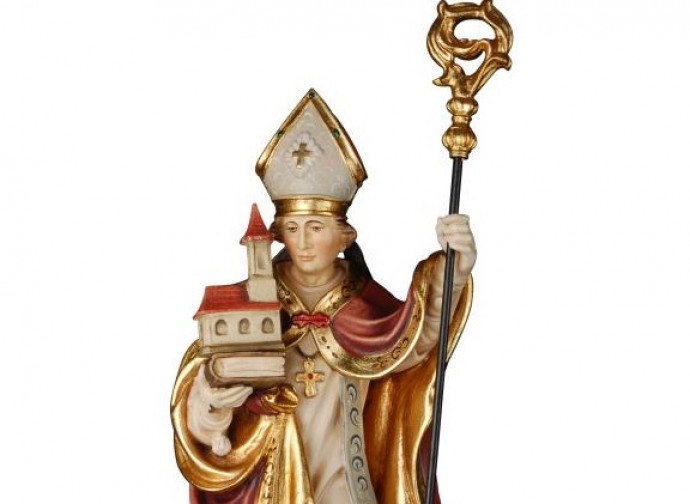 Saint Ludger (c. 742-809) was still a child when, in 753, he encountered the great evangelizer of Germany, St. Boniface, who was martyred on 5 June of the following year in Dokkum, Friesland, together with 52 companions. That meeting with Boniface and the news of his martyrdom made a great impression on Ludger, born near Utrecht to Christian parents belonging to the Frisian nobility. From an early age he was inclined to the spiritual life and went to study at the school founded by Saint Gregory of Utrecht (c. 700-775), which taught him the liberal arts and the foundations of theology. He continued his studies in England under the guidance of Blessed Alcuin of York, one of the greatest and most erudite architects of the Carolingian Renaissance. In 777 he was ordained a priest in Cologne.

Meanwhile, sent by Saint Alberic of Utrecht, he had undertaken a mission in East Friesland to rebuild the church of Deventer, destroyed by the pagans, and continue the apostolic work of Saint Boniface. He remained in the region for some years, but the revolt led by the Saxon leader Widukind, an old adversary of Charlemagne, forced him to flee. In 784 he left on pilgrimage for Rome and then went to Montecassino, where he lived for a couple of years following the Benedictine Rule though without taking vows. First the surrender of Widukind, who received Baptism, and then the arrival of Charlemagne in Montecassino marked another turning point in his life: the sovereign entrusted him with a mission in Friesland, from where Ludger returned in 787, full of enthusiasm and trust in God. Thanks to his knowledge of the language and customs of the Frisians, he was able to make numerous conversions, including that of the blind bard Berulef, whom the saint miraculously cured of his blindness.

In 793 Charlemagne offered him the position of bishop of Trier; however Ludger declined the honour but said he was willing to spread the Gospel to the Saxons. One of the very first acts of his new mission was the founding of a monastery in the place that has since then been called Munster, which was therefore born as a monastic centre. The diocese of Munster was also founded on his initiative and he became its first bishop. Among the many churches and monasteries he founded, the most famous is the Benedictine Abbey of Werden (deprived of its religious use in the 19th century). He celebrated his last Mass on Passion Sunday in 809, dying peacefully a few hours later in the mark of sanctity, with his tomb soon becoming a place of pilgrimage.