A most pure model of fidelity to Christ to the point of glorious martyrdom, Saint Lucy (†December 13, 304) is centuries later among the most dear to Christian piety, an example for the faithful on their journey to God and a source of inspiration for artists and writers. 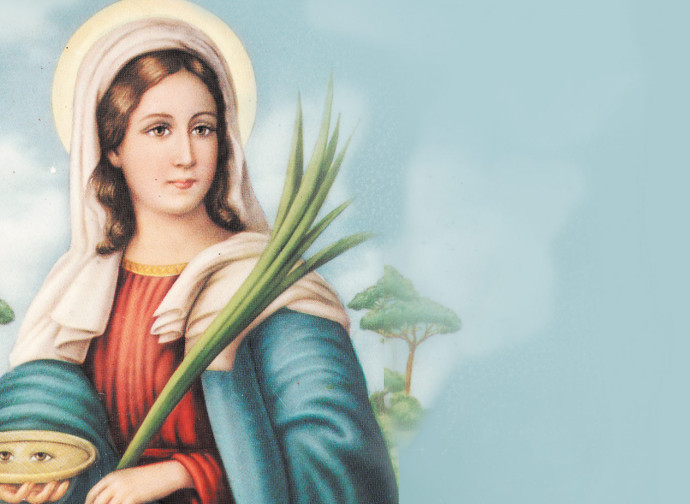 A most pure model of fidelity to Christ to the point of glorious martyrdom, Saint Lucy (†December 13, 304) is centuries later among the most dear to Christian piety, an example for the faithful on their journey to God and a source of inspiration for artists and writers. Above all Dante, who recovered after asking for her intercession and celebrated her in the Divine Comedy as “the enemy of everyone cruel” and a sure guide.

Aware of the virtues of the young Sicilian martyr, St. Gregory I (540-604) inserted her name into the Roman Canon of the Mass, in confirmation of a devotion that was already very widespread. An inscription in Greek discovered in the catacombs of Syracuse and dating back to the end of the IV century, which presents the epitaph of a Syracusan man for his deceased wife Euschia, bears witness to the antiquity of her feast: “Euschia, blameless, lived good and pure for about 25 years, she died on the feast of my saint Lucy […].”

The saint's life is narrated in various hagiographies, including a Latin Passio from the beginning of the V century, judged authentic by the most recent hagiographic research due to the precision of the legal terms used and the descriptive accuracy of the historical context. Born to a noble Christian family towards the end of the III century and educated in the faith, already as a young girl Lucy consecrated herself in secret to God, offering him her perpetual virginity, but then was promised in marriage to a rich young man attracted by her beauty.
Her anguish ended after she proposed to her mother Eutychia, seriously ill, to go together on a pilgrimage to Catania to pray at the tomb of Saint Agatha. During the prayer, on February 5 301, the Catanian virgin and martyr appeared to her: “Lucy, virgin consecrated to God, why do you ask of me what you yourself can obtain for your mother? Through your faith, she is already healed,” Agatha told her, and prophesied that she would become the patron saint of Syracuse.

On the way back, Lucia confided to the mother her vow of consecration and her firm resolution to respect it. She also obtained the possibility of giving her goods to orphans, the poor, widows and holy shepherds, devoting herself for three years to material and spiritual works of  mercy, until - during the Great Persecution of Diocletian (303-305) - the suitor who had asked her to marry him denounced her to the Roman authorities because she was “very Christian.” After the arrest, the judge Pascasius offered her the opportunity to renounce by sacrificing to pagan idols, but Lucia refused to deny Christ. “A pure sacrifice with God is to help the poor, the orphans and widows,” she replied, recalling a biblical passage (James 1:27). “I execute the orders of Caesar,” Pascasius then told her, receiving another answer revealing of Lucy’s unconventional beatitude: “And I the law of my Lord.”

After the interrogation, the magistrate had other proofs of the strength of the young virgin, who filled with the Holy Spirit answered with quotations from the Holy Scriptures. Pascasius became impatient, threatened to display her among the prostitutes (“the body is contaminated only if the soul consents,” the consecrated woman explained), and then ordered her to be taken by force to the brothel: all attempts, however, proved vain because Lucy, miraculously very heavy, was not moved an inch. In the end she was killed with a stroke of the sword to the throat, but before her last earthly breath she professed once again her love for Christ, foretold the imminent end of the persecutions of Diocletian (who abdicated on account of illness in 305) and freedom for the Church (which would come a few years later, with the edicts of 311 and 313).

A recent version of the Martyrology commemorates her with a beautiful image from the Gospel, a summary of her life: Commemoration of Saint Lucy, virgin and martyr, who kept, as long as she lived, the lamp lit to go to meet the Bridegroom, and in Syracuse in Sicily led to death for Christ, merited to enter with Him into the wedding of heaven and to possess the light that knows no sunset.