On May 1, 1955, Pius XII instituted the feast of “St. Joseph the Worker” to help workers not to lose sight of the Christian sense of labour, so fully incarnated in the humble carpenter of Nazareth and glorious putative father of Jesus. 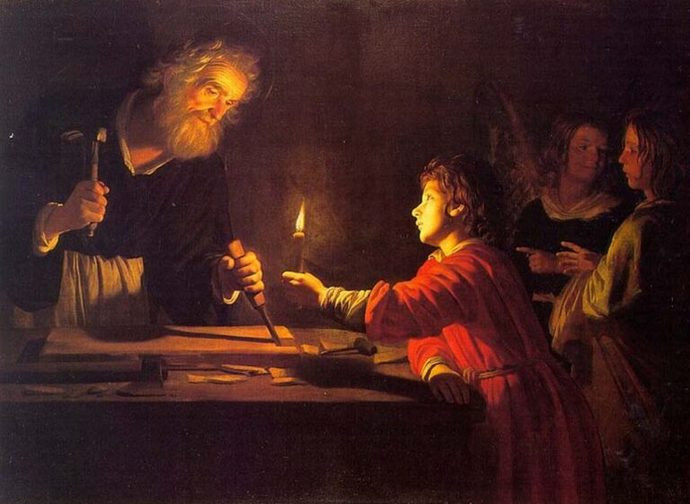 On May 1, 1955, Pius XII instituted the feast of “St. Joseph the Worker” to help workers not to lose sight of the Christian sense of labour, so fully incarnated in the humble carpenter of Nazareth and glorious putative father of Jesus. In the speech with which he instituted the liturgical feast of “St. Joseph the Worker”, Pope Pacelli warned against a distorted idea about Labour Day, an idea then very much linked to the Marxist vision of class struggle and devoid of any reference to God the Creator. The Pontiff recalled that “the enemy of Christ sows discord among the Italian people [...]. Especially in the working class it has done and does everything to spread false ideas about man and the world, about history, about the structure of society and the economy”.

Pius XII clarified the principle that work must be a means to eternal salvation, not a stumbling block “countering the order of God”. For this reason he explained that the Church cannot limit herself to the demand for “a more just social order”, but must first of all assure the worker a good Christian formation, solicit legislators and employers, indicate the fundamental principles, which are nothing other than the recognition of Christ (true and just) and His kingship over history. This is what John Paul II would call the “Gospel of work”, a very high and masterfully defined concept in his Laborem Exercens: “The truth that by means of work man participates in the activity of God himself, his Creator, was given particular prominence by Jesus Christ – the Jesus at whom many of his first listeners in Nazareth were astonished, saying, Where did this man get all this? What is the wisdom given to him? Is not he the carpenter?”.

The Old Testament is full of references to human work (“You shall eat of the work of your hands”, says Psalm 127, for example) and the New Testament – where God is variously symbolized as winegrower, sower, shepherd – completes the divine pedagogy on the meaning of work. And it shows us as a supreme example the silent but providential work of Joseph, who by the work of his hands ensured the sustenance of the Child Jesus and the Virgin Mary, (also) thus participating extraordinarily in the plan of salvation. John Paul II also writes, this time in Redemptoris Custos: “Human work, and especially manual labour, receives special prominence in the Gospel. Along with the humanity of the Son of God, work too has been taken up in the mystery of the Incarnation, and has also been redeemed in a special way. At the workbench where he plied his trade together with Jesus, Joseph brought human work closer to the mystery of the Redemption”.

It pleased God that the eternal Son was called “the carpenter's son” (Mt 13:55). Jesus himself learned the trade from Joseph and practised it privately, while he grew in wisdom and grace, until the beginning of his public activity. He therefore greatly ennobled manual work, which in the Roman world was considered unworthy (see Cicero), placing it alongside intellectual work in dignity and elevating both: Jesus always exalts the humble scribe who becomes “disciple of the Kingdom of Heaven” (Mt 13:52) and the Acts of the Apostles recall that He “made and taught”.

It is only by acting according to God's will that the worker fulfils his full vocation, aimed above all at earning the heavenly goods (Mt 6:25-34), the only and true ultimate goal. Saint Joseph understood this. And Paul VI's words about him help us to follow his holy example: “Saint Joseph is the model of the humble person that Christianity raises to great fates. Saint Joseph is the proof that to be good and authentic followers of Christ we do not need 'great things', but only common virtues, human, simple, but true and authentic”.