If the ancient theological adage rightly states that Mary is never talked about enough, the same can be said of her chaste spouse because in no other saint, except the Mother of God herself, the mystery is as great as in Saint Joseph. 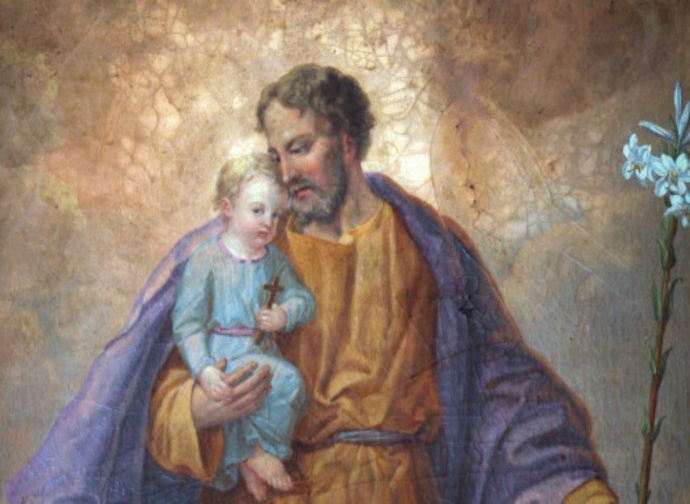 If the ancient theological adage rightly states that Mary is never talked about enough, the same can be said of her chaste spouse because in no other saint, except the Mother of God herself, the mystery is as great as in Saint Joseph. And in no other saint as in the putative father of Jesus does divine logic appear completely extraordinary and reversed compared to human logic. The Church teaches that latria (adoration) means worship given to God alone; a very special veneration called hyperdulia (“beyond the dulia”, i.e. the worship of angels and saints) is reserved for Mary; immediately followed by the protodulia due to Joseph, i.e. he is to be venerated as first among all the saints.

The reason this is explained so well by Leo XIII in the Quamquam Pluries: “Since Joseph has been united to the Blessed Virgin by the ties of marriage, it may not be doubted that he approached nearer than any to the eminent dignity by which the Mother of God surpasses so nobly all created natures. For marriage is the most intimate of all unions which from its essence imparts a community of gifts between those that by it are joined together. Thus in giving Joseph the Blessed Virgin as spouse, God appointed him to be not only her life's companion, the witness of her maidenhood, the protector of her honour, but also, by virtue of the conjugal tie, a participator in her sublime dignity”.

It is no coincidence, therefore, that Saint Joseph occupies a unique place in the hearts of believers, from the simplest devotees to the greatest theologians, up to the popes, who for centuries have exhorted Christians to increase their devotion to the Custodian of the Holy Family, supremely filled with faith, hope and charity.

The Gospel does not directly attribute any words to him, but his silence and every circumstance in which he is spoken of have an enormous impact. Joseph connects Jesus to the descendants of David, he is the man called by God to cooperate in the fulfilment of prophecies and the realisation of ancient promises. That is why the first chapter of Matthew, the evangelist who most addresses the Jews, opens with the genealogy of Jesus and - at its climax - presents Joseph as “the spouse of Mary, from whom Jesus called Christ was born”. As Luke explores the inner perspective of the Virgin, Matthew offers us an insight into the thoughts of Joseph, whom he praised as “just”. A just man who at every moment, however tormented, sought to protect Mary, saving her from stoning and protecting her honour, until the comfort of the heavenly messenger: “Joseph, son of David, do not fear to take Mary as your wife, for that which is conceived in her is from the Holy Spirit. She will bear a son, and you shall call his name Jesus, for he will save his people from their sins”.

Joseph thus embraced his vocation as spouse and “did as the angel of the Lord had commanded him”, taking Mary as his bride. That “did” says a lot about this glorious discreet saint, who loves the law of God and therefore observes it, totally accepting the divine Will, with the full assent of his intellect. As Mary freely said yes to God, so did Joseph: both surprised by Him, both ready to serve His plan of salvation. “The surprise of the chaste Joseph was comparable to that of the Virgin Mary when at the moment of the Annunciation she asked: How shall this be done, because I know not man? Mary wanted to know how she could be both virgin and mother at the same time, and Saint Joseph did not know how he could be both virgin and father”, said the Venerable Fulton Sheen (1895-1979) in a wonderful catechesis: “The Angel of the Lord explained to both that only God had the power to do such a thing”.

Through marriage to Mary, the light for all spouses, Joseph became the father of Jesus and served his mission with his virginal paternity. He saved the Child from Herod by fleeing to Egypt, raised him, fed him, clothed him, and taught him a trade, day by day fulfilling his fatherly duties to Jesus, who for his part obeyed his parents meekly and “grew in wisdom, age and grace”, the prelude to his public activity. It pleased God that Jesus, the Incarnate Word, was called the son of Joseph and wished the custody of the holy patriarch to be entrusted with “the beginning of the Redemption” (Roman Missal). As Saint John Paul II recalls in the Redemptoris Custos, Joseph was at the same time the Custodian of the Redeemer, the first devotee of Mary and the first man who was told of the mystery of the Incarnation that had been accomplished in his bride. To whom he is indissolubly bound. Therefore, the saints teach, true devotion to the one increases devotion to the other; and together they are a sure path to Christ.

That is why Saint John Chrysostom emphasised his exceptional role as “minister of salvation” and Blessed Pius IX declared him patron of the universal Church, aware of Joseph's powerful intercession, which extends to every grace. As Saint Teresa of Avila said, “To others it seems that God has granted help to us in this or that need, while I have experienced that the glorious Saint Joseph extends his patronage over all of them. Our Lord would have us understand that as He was subject to St Joseph on earth, so now in heaven Our Lord grants all of his petitions”.