Those people discarded and judged unworthy of living by today's secularist culture, with its euthanasic mentality, were those dearest to Saint John of God (1495-1550). A true innovator of hospital care and founder of the Fatebenefratelli (Hospital Order of St. John of God) one day saw the face of Jesus in a sick man, whose feet he was washing. 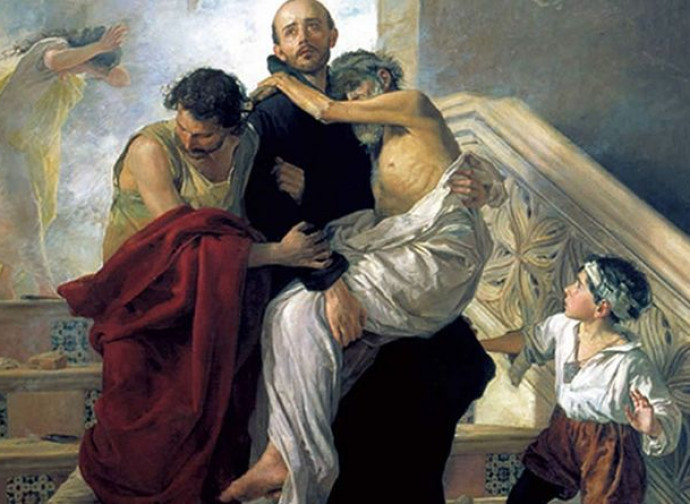 Those people discarded and judged unworthy of living by today's secularist culture, with its euthanasic mentality, were those dearest to Saint John of God (1495-1550). A true innovator of hospital care and founder of the Fatebenefratelli (Hospital Order of St. John of God) one day saw the face of Jesus in a sick man, whose feet he was washing.

He discovered his vocation after living an adventurous life for over 43 years. João Cidade, as he was named at birth, was born in Portugal and when he was still a child left his father's house and went with a cleric to Oropesa, Spain, where he spent most of his youth working as a shepherd in the service of a family. At the age of 27, he enlisted in Charles V's army to fight in the battle of Fuenterrabía, on the border with France, and risked hanging for losing his loot. In 1529 he took part in the important military campaign to free Vienna from the siege of the Muslims of the Ottoman Empire.

In the following years he travelled halfway around Europe, practising various other trades, from bricklayer to peddler. He also made a brief return to Portugal, where he discovered that his parents had prematurely died. His itinerant phase ended in 1538, when he moved permanently to Granada, where he opened a small bookshop. On 20 January of the following year a pivotal event changed the direction of his life: he listened to a sermon by John of Avila, saint and Doctor of the Church, which enlightened him on the need to suffer for Jesus. Considering himself a sinner, he began to do acts of penance and mortification in public, even going so far as to tear his hair out. He was thought to be insane and locked up in the Royal Hospital, but this drama also proved to be a grace of Providence. Because of the mistreatment he suffered in hospital, he became aware of the wretched conditions in which the mentally ill were living. John of Avila's spiritual guide, meanwhile, helped him to understand what it meant to offer his sufferings to God.

Having regained full self-control, he went on pilgrimage to the shrine of Santa Maria de Guadalupe, in Extremadura, to discover how to give himself to the Lord. He received heavenly counsel through two visions of Our Lady. In the first, the Blessed Virgin gave him clothes with which to dress the child Jesus; in the second, holding a crown of thorns in her hand, she said to him, “It is with thorns, with work and suffering that you must conquer the crown that my Son has prepared for you”. On his return to Granada, John worked zealously in helping the sick, giving particular attention and affection to those with psychiatric problems, whose fragility he knew well. He soon attracted many disciples, obtained the help of several benefactors and the strong support of the Archbishop, who suggested that he wear a distinctive habit, and called him: John of God!

The saint walked the streets begging in a very original way: “Do good to yourselves. Do good, brothers!” Fatebenefratelli (Dogoodbrothers) became the name by which the members of the new congregation, erected as a religious order in 1586 by Sixtus V, were popularly called, when the hospital institution - which provided for the profession of a fourth vow, consisting in the care of the infirm - had already crossed the borders of Spain. With his strong trust in “Christ who provides” John overcame countless difficulties and, taking care of the sick, he thought both of the health of their bodies and the salvation of their souls. The virtue of charity was accompanied by the gift of science, since the saint organised the hospital into several wards, separating the abandoned elderly and the patients with various illnesses: this soon gave rise to the modern hospital. The Fatebenefratelli, moreover, began to specialise in medicine and surgery, studying in special schools attached to the hospitals they founded.

When he fell ill with pneumonia, he confided to the Archbishop that three things afflicted him: “The first, having served Our Lord so little, while I have received so much. The second, the needy, the people who have turned away from sin and the poor recalcitrants I have taken upon myself. The third, these debts I have contracted for Jesus Christ”. He was only reassured when the Archbishop personally committed himself to paying off his debts. He died on March 8, 1550, on the dawn of his 55th birthday, while kneeling and holding his crucifix to his chest.