In that troubled period of the 11th century for Christianity, an extraordinary figure emerged: Saint Gregory VII (c. 1015-1085), whose name is linked to the “Gregorian Reform”. It was so called because Gregory was the greatest representative and supporter of the vast reformatory work already begun by his predecessors. 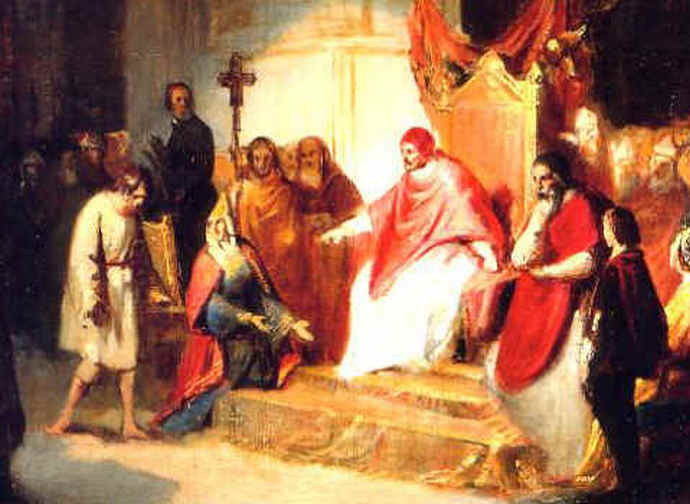 In that troubled period of the 11th century for Christianity, an extraordinary figure emerged: Saint Gregory VII (c. 1015-1085), whose name is linked to the “Gregorian Reform”. It was so called because Gregory was the greatest representative and supporter of the vast reformatory work already begun by his predecessors, which gave new life to a Church debased by the widespread immorality of the clergy and imperial interference.

Born Hildebrand of Soana, Tuscan by birth, as a young man he studied in Rome and then at the Abbey of Cluny, with a period of training in Germany in between. In this phase Hildebrand was able to meet the most active religious in promoting the reform of the Church, such as Bruno of Toul. Bruno became pope in 1049 under the name of Leo IX (1002-1054) and worked to defend ecclesiastical celibacy and combat simony.

It was Saint Leo IX who sent him as papal legate to France, where Hildebrand found himself handling the case of Berengarius of Tours, who had created a scandal by questioning the real presence of Jesus in the Eucharist. Hildebrand's authority in the life of the Church gradually grew. He also collaborated with the successors of Leo IX, at a historical juncture in which the “Privilege of Otto” (promulgated in 962) was in force, which required the consent of the emperor for the election of the pontiff. He was so esteemed in the Church faithful to Christ that the reforming cardinals, on the deathbed of Stephen IX, swore that they would not elect any pope until Hildebrand returned to Rome: they then decided to join him in Tuscany, electing together Nicholas II (†1061). It was the latter, with the bull In nomine Domini (1059), who put an end to the emperor's power to interfere in the papal election, establishing the exclusive prerogative of the cardinals in the choice of the pope.

Hildebrand ascended the papal throne in 1073 and energetically continued the reform of the Church. He acted against simony, ecclesiastical concubinage and the other immoralities that gripped the clergy. From the rich epistolary that has reached us (438 letters), all his charisma emerges. This is what he wrote to Saint Hugh of Cluny: “If then with the eyes of the spirit I look west, south or north, I hardly find legitimate bishops by election and conduct of life, who let themselves be guided... by the love of Christ and not by worldly ambition”. In 1075 he wrote the document known as Dictatus Papae, a list of 27 propositions in which he stated that only the pontiff can by right be called “universal”, because the Church was founded directly by God; and only the pope can depose and resettle bishops, and can do the same with the emperor. Gregory VII stated in short that the spiritual power of the pope is superior to the temporal power of any sovereign, because every successor of Peter works on earth as Vicar of Christ.

In the meantime, Henry IV of Franconia (1050-1106) continued illegally to appoint bishops in Germany, intensifying the past clash known in history as the “Fight for investitures”. Gregory excommunicated the sovereign, who, finding himself delegitimized in the eyes of his subjects, was forced to ask the Pope's forgiveness, with the famous penance of Canossa.

In the following years Henry IV strengthened his position, continued his attempts at hegemony over the Church, and even elected an anti-pope and besieged Rome, forcing Gregory to ask for the help of the Normans of Robert Guiscard. The Normans freed the City from the invaders but ended up wildly pillaging it, without even sparing the churches. It was 1083. The Pope was forced to spend the last part of his life in exile in Salerno. On his tomb was carved the sentence: “I loved justice and I hated iniquity: therefore I die in exile”. In a letter to the monks of Marseilles he had written words that still seem pertinent today: “Good people who are able to serve God even in times of peace are rare. But very rare are those who for His love do not fear persecution or are ready to decisively oppose God's enemies. Therefore the Christian religion - alas - has almost disappeared, while the arrogance of the ungodly has grown”.