His name means “God is my salvation”. The prophet Elisha continued Elijah's mission at a dramatic time for Israel, marked by continuous infidelity to the Covenant on the part of the kings and the people, culminating in idolatry and the persecution of the prophets. 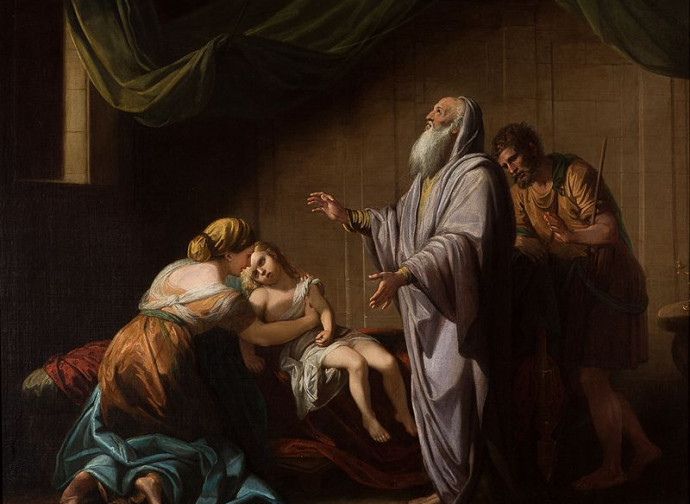 His name means “God is my salvation”. The prophet Elisha continued Elijah's mission at a dramatic time for Israel, marked by continuous infidelity to the Covenant on the part of the kings and the people, culminating in idolatry (the cult of Baal had become particularly widespread) and the persecution of the prophets. His figure is introduced in the First Book of Kings, where we read that God, manifesting himself on Mount Horeb to Elijah (who “covered his face with his mantle”), gave this order to the great Father of Carmel: “[...] And Elisha the son of Shaphat of Abel Meholah you shall anoint as prophet in your place” (1 Kings 19:16).

Following the divine command, Elijah set off towards the desert of Damascus. On the way he met Elisha who was ploughing with 12 pairs of oxen, leading the twelfth pair. Elijah threw his mantle over him, at which point Elisha, having understood the meaning of the gesture, said: “Please let me kiss my father and my mother, and then I will follow you”. When he had gone away from him, Elisha sacrificed a pair of oxen, cooked their flesh with wood from their yoke, and offered it to the people to eat. Then he followed Elijah, putting himself at his service (cf. 1 Kings 19).

The separation between master and disciple took place sometime later along the Jordan, where Elijah asked Elisha: “Ask what I should do for you, before I am taken away from you”. With faith, Elisha made his request: “Two-thirds of your spirit be in me”, where two-thirds is the portion of the inheritance that Deuteronomy indicates is due to the firstborn (Deut 21:15-17). Elijah agreed to this request on condition that Elisha was able to see him being taken away. And so it was, because the disciple saw his spiritual father being taken up to heaven in a chariot of fire (“My father, my father, chariot of Israel and his steeds!”, Elisha cried out to Elijah) and picked up his fallen mantle, dividing the waters of the Jordan with it, just as Elijah had done shortly before (cf. 2 Kings 2).

The prophetic ministry of Elisha, who died of illness, took place during the reigns of Joram (c. 852-841 BC), Jehu (c. 841-815 BC),  Jehoahaz, (c. 814-798 BC) and Jehoash (c. 798-783 BC). This whole period was marked by frequent wars with the Arameans and Moabites. Elisha was the constant voice of the Lord, admonishing Israel about its duties towards God. He worked many miracles, such as the healing of the waters of Jericho, the multiplication of oil and loaves, the resurrection of the child of the Shunammite woman, the healing of Naaman’s leprosy. His liturgical celebration, like that of Elijah, was spread in the West by the Carmelites, who introduced the feast of St Elisha in the General Chapter of 1399, recalling his fidelity to the service of God.