The great Lebanese miracle worker and hermit Saint Charbel Makhlouf (1828-1898) was the fifth child of two peasants, who named him Youssef Antoun (Joseph Anthony). His father died when he was only three years old. His mother remarried two years later to a very pious man who directed him in daily prayer.... 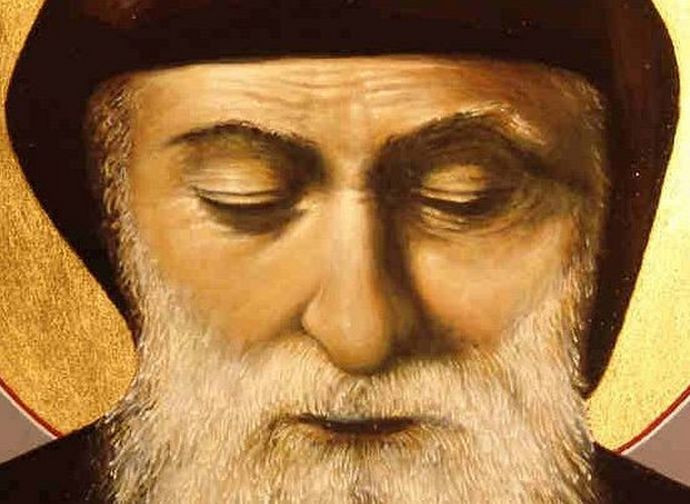 The great Lebanese miracle worker and hermit Saint Charbel Makhlouf (1828-1898) was the fifth child of two peasants, who named him Youssef Antoun (Joseph Anthony). His father died when he was only three years old. His mother remarried two years later to a very pious man who directed him in daily prayer. As a young boy he began to take care of the flock and showed an inclination towards the contemplative life. According to the journalist Patrizia Cattaneo, author of several books on the saint, Youssef used to say to his cow: “Wait until I finish praying, because I can't talk to you and God at the same time. He takes precedence”. At the age of 22 he ran away from home and began his novitiate in the Lebanese Maronite Order, the oldest in the Catholic Church of the Maronite rite. In honour of an Antiochian martyr, he chose the name Charbel, which means “history of God”.

He studied philosophy and theology under the erudite guidance of Nimatullah Youssef Kassab, also canonized. He was ordained a priest in 1859. He then returned to the monastery of St. Maron in Annaya, where he had taken his perpetual vows some time earlier, and lived in total obedience to his superiors. His daily life was out of the ordinary. He fasted and kept vigil incessantly, kneeling for hours before the Blessed Sacrament. Mass was the heart of his day and he prepared himself for it with great care. He would only leave the monastery on the order of his superiors to visit the sick or administer the sacraments. Since he felt the need for greater meditation with God, in 1875 he asked permission to retire to a hermitage belonging to the monastery. There he spent the last 24 years of his earthly life, dying in the odour of holiness on Christmas Eve 1898, after eight days of mortal agony following a stroke that that he suffered while elevating the consecrated Host and chalice.

From the grave in which he was buried a very intense light soon began to appear at night, visible throughout the valley, which attracted a multitude of people. Partly for fear that his body could be stolen, the monks decided to move it to a chapel inside the monastery. It was then found that his body was still uncorrupted and a reddish liquid oozed from it. It had miraculous properties and continued to be excreted for 79 years, until 1977, when Charbel was proclaimed saint. The doctor Georges Chokrallah, among the witnesses at the beatification process, said: “Driven by scientific curiosity, I tried to discover the secret of that body and that liquid. After examining them for about 17 years, two or three times a year, my personal opinion, based on study and experience, is that they were imbued with a mysterious supernatural force.”

A remarkable increase in cases of healing occurred when the coffin was reopened before a commission of three doctors in 1950, in the Holy Year, which attracted not just Christian pilgrims. “They mentioned cases of blind people who regained their sight, hunchbacks whose backs were straightened, paralytics who recovered the use of their limbs by coming to pray in the crypt and rubbing them against the wall of the tomb. Even more remarkable is the fact that the miraculously healed are Muslims as well as Christians. And for this reason word has spread throughout Islam and the sick are flocking to Annaya to pray. I have been to the mountain of Djebail myself. The spectacle is extraordinary”, Monsignor Nasri Rizcallah wrote at the time, reporting on various conversions that accompanied the physical healings.

In his homily for the canonization of Charbel, Paul VI said: “The spirit of the eremitic vocation that the new Saint manifested, far from belonging to a time now past, seems to us very important, for our world, and for the life of the Church. The social life of today is often marked by exuberance, excitement, the insatiable search for comfort and pleasure, combined with a constant waning of will power: it will not regain its balance except with an increase in self-restraint, asceticism, poverty, peace, simplicity, interiority, silence [...]. To save the world, to conquer it spiritually, it is necessary, as Christ wants, to be in the world, but not to belong to everything in the world that distances us from God. The hermit of Annaya reminds us of this today most powerfully”.