Saint Catherine of Alexandria (c. 287-305) lived in one of the most important cultural and religious centres of antiquity and was “filled with sharp wit, wisdom and strength of spirit”, as the Roman Martyrology recalls. 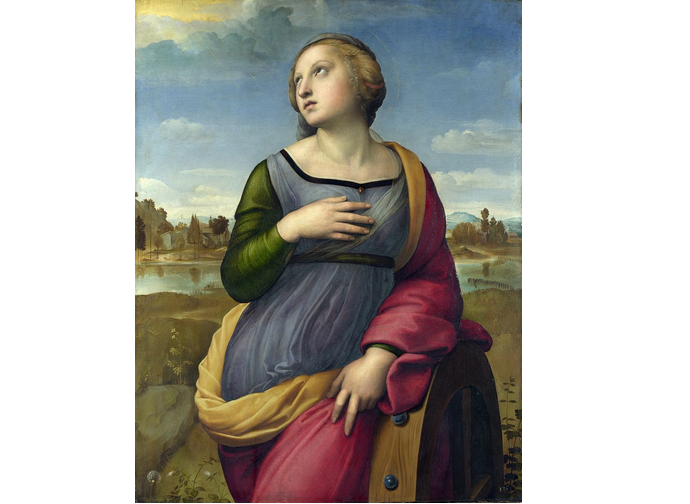 She is among the most represented martyrs since the Early Middle Ages and honoured with the dedication of many churches. Saint Catherine of Alexandria (c. 287-305) lived in one of the most important cultural and religious centres of antiquity and was “filled with sharp wit, wisdom and strength of spirit”, as the Roman Martyrology recalls.

The oldest written source known about her martyrdom dates back to the 6th century, followed by other hagiographic texts such as the Golden Legend of Blessed Jacopo da Varagine. Tradition reports that Catherine was a young woman of great beauty and intelligence, very learned in philosophy and religion. Still an adolescent, she received the gift of mystical marriage with Jesus.

The circumstances of her martyrdom are linked to a visit to Alexandria by Emperor Maximinus Daia, appointed as Caesar for the East in 305 during the Tetrarchy (we cannot exclude the hypothesis of Jacopo da Varagine, who refers instead to Maxentius, who governed Africa from 306). Maximinus ordered every subject to offer sacrifices to the pagan gods. Catherine appeared at the emperor's palace and invited him to recognise Christ as Redeemer, refusing to sacrifice to false gods. To counter the eloquence of the young girl and show her that God could not end up crucified (“scandal for the Jews, madness for the pagans”, writes Saint Paul), Maximinus summoned philosophers and rhetoricians. But these ended up being converted by Catherine, arousing the wrath of the emperor, who had them burned alive. At the same time, falling in love with her, he asked her several times to marry him, offering to repudiate his wife.

Catherine refused the Emperor's proposal, confirming her consecration to Christ. She was first put in prison, then tortured on a cogwheel (her recurring iconographic attribute) and finally beheaded. Among the many wonders reported by the hagiographies, is found the happening of her remains transported by angels to the Sinai Peninsula, on the hill now known as Mount Catherine. On its slopes Justinian I (482-565) founded the famous monastery which was later dedicated to the saint, because around the 9th century monks had found her body.

In addition to the many attestations of the cult’s antiquity, it should be remembered that the Egyptian virgin and martyr was very dear to saints such as the Spanish mystic Caterina Tomás (1531-1574), Angela Merici (1474-1540) and Joan of Arc (1412-1431). The latter claimed to have had - from 13 years of age onwards - locutions and visions of St Margaret of Antioch, St Michael the Archangel and St Catherine of Alexandria, who advised the future patroness of France also during her trial.

Another great mystic devotee of Catherine of Alexandria is Saint Matilda of Hackeborn (c. 1240-1298), who had an apparition of the ancient martyr on the day of her feast: she appeared “all wrapped in a mantle covered with golden wheels...”, we read in the Book of Special Grace, based on the revelations of Matilda. The German nun entertained a dialogue with Catherine on the meaning of a song in her honour, on her mystical marriage to Jesus, and on the Eucharist. Among other things, Catherine responded to a question from Matilda: “[...] My beauty is that splendour and dignity that Christ spreads above his faithful, adorning them with the rich purple of His Blood. So know that this splendour is renewed and increases with every Holy Communion; those who takes Communion once doubles this splendour; but he who takes Communion a hundred and a thousand times, likewise increases this beauty of his soul”.