Mysticism reached very high peaks with Matilda of Hackeborn (c. 1240-1298), one of the great saints who grew up at the monastery of Helfta in the 13th century. Her spiritual life is charted in that treasure chest that is The Book of Special Grace, born of the confidences made out of obedience to two sisters, who noted down her revelations. 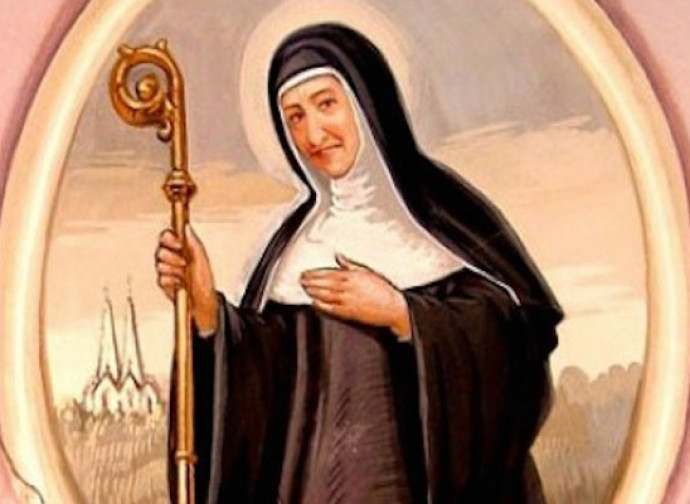 Mysticism reached very high peaks with Matilda of Hackeborn (c. 1240-1298), one of the great saints who grew up at the monastery of Helfta in the 13th century. Her spiritual life is charted in that treasure chest that is The Book of Special Grace, born of the confidences made out of obedience to two sisters, who noted down her revelations. When Matilda learned of the nuns' notes (one of whom was her pupil St Gertrude the Great), she was disturbed because of her profound humility. But it was Jesus himself who reassured her, telling her that this writing would spread the greater glory of God and for the benefit of her neighbour. At that point the saint decided to carefully review the manuscript, in which her visions, her spousal union with Christ, her dialogues with the Blessed Virgin are described in such a way as to capture the intimacy she had with the sacred.

She entered the monastery at the age of seven, prompted by the happiness caused by a visit there with her mother and despite the initial opposition of her parents. She became a nun around the age of 17. She was formed under the guidance of her sister Gertrude (not to be confused with Gertrude the Great), who had in the meantime been elected abbess. From her very first steps in the monastery God filled her with supernatural gifts, which were combined with recurring trials and sufferings, including physical ones, offered with joy by Matilda for the salvation of souls. She was called “the Nightingale of God” because of her dulcet singing. She was the author of several orations and soon developed such a love for Sacred Scripture that her way of reading it “aroused devotion in everyone”. She preferred the Gospel, particularly recommended by Jesus: “Consider how immense my love is: if you want to know it well, nowhere will you find it expressed more clearly than in the Gospel”.

The Book of Special Grace influenced devotion to the Sacred Heart of Jesus, preparing the ground - together with the Herald of the Divine Love by Saint Gertrude - for the definitive affirmation of the cult, which took place following the revelations to Saint Margaret Alacoque in the 17th century. In her pages a central place is occupied by the sacraments of Confession and Communion as means of sanctification, by the beatitude of Paradise in which she saw her contemporaries Thomas Aquinas and Albert the Great immersed (“when they came before the throne of God, all the words of their writings appeared on their robes in golden letters”), from pity towards the souls in Purgatory (for whom she offered continual sacrifices), from visions of the souls in Hell (“when they come out of their bodies, they are invaded by darkness”) and from conversations with Our Lady. She called her Immaculate, because Mary had already revealed to her the dogma proclaimed by the Church six centuries later. One day she asked Mary what the first virtue practised in childhood had been: “Humility, obedience and love”, answered the Heavenly Mother.

Saint Matilda is also linked to the promise of the three Hail Marys. Our Lady promised to assist her with her presence at the hour of death if she recited a daily Hail Mary for each Person of the Trinity, as a sign of thanksgiving to God for the special gifts of power, wisdom and love that the Father, the Son and the Holy Spirit, respectively, have given to the Virgin. The promise of the three Hail Marys, which applies to all souls who recite them with devotion, has been propagated over the centuries by various saints and pontiffs.