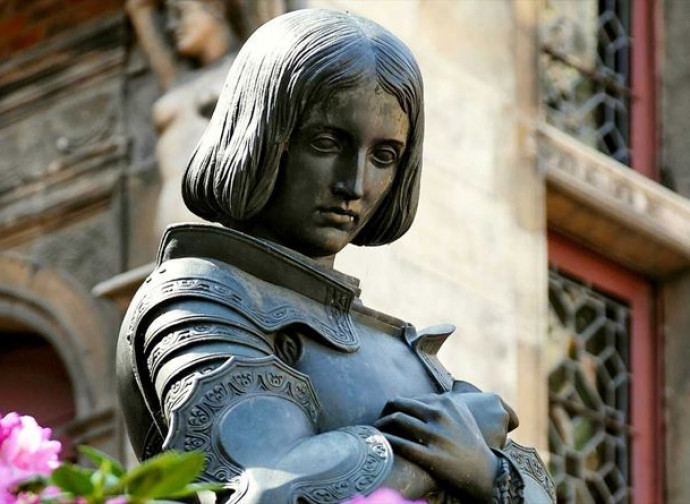 She was born in Domrémy at a time when the Church was torn apart by the Western Schism. From childhood she showed her Christian devotion and charity towards the sick and the poor. She grew up during the fiercest phase of the Hundred Years' War (1337-1453).

Joan was barely thirteen when for the first time she heard the voice of Saint Michael the Archangel, which was soon followed by those of two great martyrs of antiquity: Saint Margaret of Antioch and Saint Catherine of Alexandria. The heavenly voices initially spoke to her about her personal life and then ordered her to leave everything to take the lead of the French army. The girl took a vow of virginity. After three meetings with a captain, who had initially mocked her, she was able to meet the Dauphin of France, the future Charles VII. She told him that she had been sent by God to bring help to him and his legitimate kingdom. The sovereign, astounded, had her interrogated twice by clerics and theologians to see if this heavenly request could be founded; having obtained a positive opinion, he allowed her to accompany a military expedition to help the strategic city of Orleans, heavily besieged by the English.

It was 1429 and was the beginning of the epic of Joan of Arc. On 22 March she sent a letter to the English: “Jesus-Maria! King of England and you, Duke of Bedford, who call yourself Regent of the Kingdom of France; you, William Pole, count of Suffolk; John Talbot; and you, Thomas Lord Scales [...] make satisfaction to the King of Heaven; surrender to the Maid [the name the heavenly voices called her, ed.] who is sent here by God, the King of Heaven, the keys of all the good towns which you have taken and violated in France. She is come here by God’s will to reclaim the blood royal. She is very ready to make peace, if you are willing to grant her satisfaction by abandoning France and paying for what you have held. And you, archers, men-at-war, gentlemen and others, who are before the town of Orleans, go away into your own country, in God’s name [...]”. The letter went unheard. The girl arrived in Orleans on horseback. She was dressed as a soldier and wearing a white banner depicting Christ the King and bearing the inscription Jesus-Maria.

Preceded by a procession of priests singing the Veni Creator, Joan found Orleans in a dramatic situation: the English had literally surrounded it, as they controlled 11 fortresses. Before her arrival, the French population within the walls had pushed for surrender, but Joan's charisma turned everything upside down. First of all, she managed to reform the French troops: she removed the prostitutes, forbade blasphemy, violence and looting, forced the soldiers to confess and gathered them twice a day in prayer around the banner of Christ the King. On 30 April, a few days before the battle began, she climbed a bastion to be heard by all the English: she asked them to break the siege, but was covered with insults. The English threatened to burn her alive if they took her prisoner. In vain, Joan tried diplomacy several times.

The night between 4 and 5 May 1429 the battle broke out: on 8 May Orleans was totally freed. On 18 June the Maid led her people to another sensational victory in the Battle of Patay, where, due to an incredible series of events, over two thousand English soldiers and only three French died. Joan mourned the victims of both camps. She even got off her horse to comfort a dying adversary and help him confess. After Patay, several towns in the hands of the English surrendered without a fight. On 17 July, in the cathedral of Reims, Charles VII could be consecrated and crowned king of France, according to the divine will manifested to Joan.

Unfortunately, internal divisions within the French nobility close to the court (part of which sought compromise with the Burgundians) and a changed attitude towards the Maid led to her capture, on 23 May 1430, by the Burgundians. A few months later, the Burgundians sold Joan to the English allies.

The University of Paris, under the thumb of the English, asked to try her for heresy. A pseudo-inquisitorial tribunal was soon established, composed of clerics in the pay of the occupants, led by Bishop Pierre Cauchon (†1442), excommunicated post mortem. On 3 January 1431, Henry VI, King of England, wrote to the judges to press them to condemn Joan as a heretic and witch. During the exhausting trial, the saint responded wisely and told them to submit in all things to the judgment of the Church, in which, however, she did not recognize those judges. She was finally condemned with false accusations. She asked to be taken to the Pope, but the judges refused. The attempt to save her by good men of the Church, such as the famous priest Jean Lohier - who went to Rouen claiming that the trial was null and void - the Bishop of Avranches (who was also imprisoned), and others failed.

The English had already made their decision and held Joan as a prisoner of war in a castle controlled by them, and not in a prison of the Inquisition, as would have happened in a regular church trial. The sentence also served to discredit the French king who had trusted in Joan's mystical gifts. Gifts that continued in prison: “Saint Catherine told me that I would be helped; I can't say whether this referred to my release from prison or during the trial [...]. But more often the voices told me that I would be freed with great victory. Then the voices said to me: Accept with serenity all this, even your martyrdom, because in the end you will come to the kingdom of Paradise”.

On 30 May 1431, after requesting and obtaining confession and receiving the Eucharist, Joan was burned at the stake in Rouen. She invoked forgiveness for her executioners and cried out the Name of Jesus. The flames consumed her whole body, except her heart, which remained intact: the English threw it into the Seine. Many testified that they saw the Name of Jesus written in the fire. Thus died St. Joan of Arc, faithful to the point of martyrdom to Christ crucified and risen.

In 1455, after the French had re-conquered all of France and the last anti-pope in history had died, Callistus III authorized a review of the trial. The following year Joan was recognized as completely innocent and the trial that had condemned her was declared null and void. Benedict XV canonized her in 1920. Two years later she was proclaimed Patroness of France.